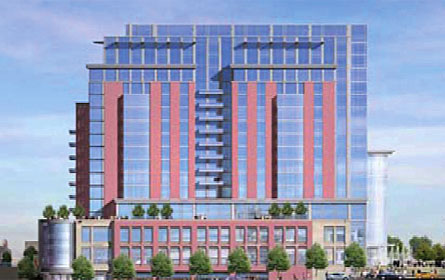 Photo New York Ciyt Department of City Planning
In 2005, then-Deputy Mayor Daniel Doctoroff and then-City Council Member John Liu reached agreement on the Flushing Commons project. But now, with the project still needing final approval from City Council, both men have moved on to other jobs leaving the validity of the agreement uncertain.

The Charter Review Commission appointed by Mayor Michael Bloomberg, though initially focused on term limits and non-partisan elections, recently invited comments about the city's Uniform Land Use Review Process, or ULURP. While it is unlikely that the commission will propose changes in this process in time for them to be placed on the November ballot, the many comments heard at a recent hearing and during the 10 public hearings already held suggest that there is a huge gap between the land use professionals, in both government and the private sector, who tend to be satisfied with the way things work and suggest only minor changes, and the community activists who see major problems with the role of community boards and community planning.

The Charter Commission will hold five more public hearings before the end of the summer and shortly after that is expected to make recommendations to be placed on the November ballot. Bloomberg could then decide to continue the work of the commission, appoint another commission or retire the body entirely.

The New York City Charter is basically the city's constitution and the legal framework for the way government is organized and functions. The land use process went into effect in 1977 after a charter revision and was most recently revised in 1989. Under the roughly seven-month review process, proposals for zoning changes, purchase and sale of city land and most major development projects go before affected community boards, borough presidents, the City Planning Commission and City Council where they are subject to public hearings and votes.

Many key decisions about a plan, though, are made outside the ULURP process, leaving the formal seven-month period with theatrical posturing by proponents and opponents or just plain dull routine and numbing public relations performances.

The reviews usually are done by companies that are hired by the applicant to protect the applicant from subsequent lawsuits. The experts are not required to make their findings understandable to the average citizen or elected official. As a result, the environmental reports are too long and complicated and not analyzed or interpreted in useful ways.

Much to the chagrin of developers, it can take months and even years of back-and-forth with city officials and experts to complete a draft environmental impact statement. With most changes to the environmental review made prior to the land use review process, elected officials and community representatives have a limited role in it. Community boards can review drafts of the environmental report, but they lack the professional expertise and staff to conduct any in-depth analysis.

Many applicants do not want to risk the cost and uncertainty that the land use process implies, so they meet informally with community representatives and public officials before the proceedings begin. They often negotiate concessions with interested community groups and adjust their proposals. While this may be an inevitable part of the political process, much of it happens behind closed doors, undermining the required public procedures. City officials may make promises of government expenditures and services, and private developers may agree to provide certain community benefits, all outside the public arena.

To those not involved in these discussions, the process has become a rubber-stamp for decisions that were already made. While minor changes are often made during the review process, very few rezonings or major development projects have been rejected or substantially altered during it.

In recent years, City Hall has taken to writing up extensive agreements with community representatives -- let's call them side agreements -- that set out in advance conditions for community approval of the proposed project or rezoning. These are negotiated before and during the land use review period. And the written agreements are not subject to oversight nor are they necessarily enforceable.

For example, a July 11, 2005 memorandum from then-Deputy Mayor Daniel Doctoroff to then-City Council Member John Liu committed to conditions for the Flushing Commons project in Queens. The project is currently at the final stage of review awaiting a City Council vote. Yet City Hall changed its mind about major details of the project after Doctoroff left government and John Liu left the City Council to run for comptroller. The validity of the agreement is uncertain.

Other agreements, such as one that went along with the rezoning of Williamsburg in Brooklyn or the deal drafted by then-Bronx Borough President Adolfo Carrion to help gain approval for the new Yankee Stadium, raise serious questions about legality and enforceability, as well as the issue of who truly represents the "community.". The flowering of such activity both before and outside the land use review process surely indicates that something is not working with that process. With that in mind, the time has come to look at measures that bring openness, transparency and enforceability to the land use process without making it any longer or more complicated than it has to be.

The Need for Planning

Some of these problems would be resolved with better and ongoing planning by the city and communities. During the land use process, communities often raise longstanding issues relating to services, especially transportation and schools. Neighborhoods experiencing new development spurred by rezoning, particularly in Manhattan and parts of Brooklyn and Queens, now find themselves with new traffic problems and even more overcrowded schools. If the city encouraged more long-term comprehensive planning, residents might have greater confidence that their concerns about key services would be addressed Instead, many communities fear that new development will only aggravate existing service shortfalls.

But New York City does little real planning . The Department of City Planning, the agency entrusted with planning in the charter, is fixated on ad hoc localized zoning instead of planning. Zoning regulates the built environment but doesn’t deal with most of the complex issues that New Yorkers care about. It regulates new development but does little to address most quality-of-life issues or solve serious problems in our neighborhoods. And there is an inherent conflict of interest with the city planning department charged with both pushing for zoning changes and with providing information and support to communities that might want to question those changes.

The City Charter mandates comprehensive planning documents such as the Strategic Plan and the City Planning Department's own strategic plan, but these are not subject to public review and approval and may not be regularly updated. They are virtually unknown documents that get filed away

The first major publicly disseminated comprehensive plan in decades was PlaNYC2030, issued in 2007. But the administration did not submit the plan for debate and approval to the community boards, borough presidents, City Planning Commission and City Council in accordance with Section 197-a of the City Charter. While the plan includes many good projects, it has major gaps, does not recognize a role for neighborhoods, and remains a strictly executive document that may have a life limited by the tenure of the mayor if the next mayor decides not to fund the plan.

While citywide planning occurs in New York, it is piecemeal and not connected to community-based planning. Since the 1989 Charter revision gave community boards explicit authority to introduce their own local comprehensive plans, almost a dozen 197-a plans have been approved. But at this rate it will take a century before every community board has an approved plan.

The community planning process is lengthy and burdensome, and the City Planning Commission can hold it up indefinitely. Community boards lack resources for planning, and nobody in government has the responsibility for getting the plans implemented.

In some cases, such as Williamsburg, the city's rezonings have undermined previously approved community plans. This has discouraged many communities from planning in the first place, and those that do steer away from seeking official approval. Of some 100 community plans, only a fraction was submitted for official review. City planning has determined that the plans are "advisory," which in practice sends the message that they can be ignored with impunity.

The city's 59 community boards are where the ULURP process is closest to the ground, where decisions about land use have a direct impact on the places people live and work. But community boards also lack the staff and resources to fully engage in the process in a meaningful way. The average board has a budget under $200,000 a year (and shrinking) to cover an area with more people than most municipalities in New York State have. Together the boards get less than .02 percent of the city budget.

Without resources, community boards cannot afford to get independent professional advice to evaluate the complex land use issues before them. Board members are volunteers and get no systematic training. Oversight of community boards is limited, and shortcomings can become systemic and longstanding. Too often community board members, appointed by their borough presidents, do not reflect the diversity in their communities, reducing their legitimacy.

Community boards in wealthier areas of the city may compensate by mustering their own free or low-cost experts. They may enjoy privileged access to decision-makers and feel little need for a change.

These communities, though, may not have the greatest stake in changes in community boards and their role in the land use review process. Other areas face substantial life and death issues centering around land use, such as environmental hazards resulting from waste facilities and transportation infrastructure or displacement pressure resulting from rapid development. These areas are disproportionately low-income communities of color. It is no coincidence that these neighborhoods have done a large number of community-based plans in the city and often seek to boost the role of community boards.

The public discussions about the City Charter offer an opportunity to rethink the way the city does land use review and planning, and fill the gaps left open because community boards don’t have a level playing field. We shouldn’t let backroom dealing trump the Uniform Land Use Review process, let zoning trump planning, or let community boards down.