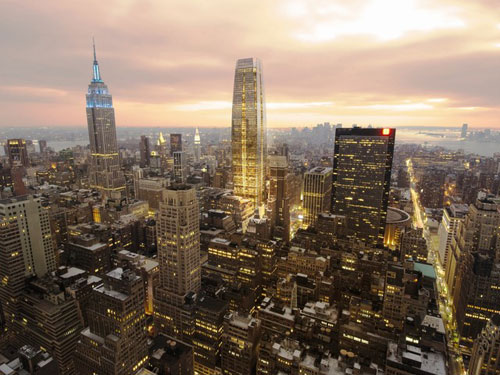 The Empire State Building better move over. It's about to share some skyline.

Opponents of the project, which include the Empire State Building's owners, said the new tower -- to be developed by Vornado Realty Trust -- would block the views of arguably New York City's most iconic structure.

In the end, Council Speaker Christine Quinn, who represents the area, said the new skyscraper embodies what New York is all about -- the constant need to grow and expand.

"New York City has never been a city that stays stagnant, that stays the same," said Quinn. "We want new Rockefeller Centers. â€¦ New York City is about growth -- about growing bigger and higher all the time."

The council voted 47 to 1 to approve the tower, otherwise known as 15 Penn Plaza, with Councilmember Charles Barron dissenting.

Within the council the obstructed views did not cause as much concern as the initial lack of a commitment from the developer to contract with women and minority owned businesses. Yesterday, Quinn said she received a pledge from Vornado to set aside 15 percent of its contracts for them.

The commitment did not minimize all of the opposition among council members.

"This is a project for the rich, for the elites," Barron said. "When they say thousands of jobs, for who?"

The local community board also opposed the project, pointing out Vornado has no anchor tenant and no set construction date.

Quinn defended the developer, arguing no one goes through the land use process unless they intend to build.

In response to yesterday's vote, a spokesperson from Vornado released the following statement: "We wish to acknowledge the efforts of the City Council, the City Planning Commission, the borough president and all those connected with the approval of our project, which we believe will be an outstanding addition to New York's iconic skyline. We look forward to working with the Council to implement strong minority and women participation in the development and construction of 15 Penn Plaza."

The tower will include more than 2 million square feet of office space, 11,126 square feet of retail space and up to 100 underground parking spots. The developer has also committed to $150 million in transportation infrastructure improvements, including refurbishing the "Gimbels" underground walkway from Penn Station to Herald Square. These new pathways will connect Sixth and Eighth avenues.

Quinn said the project would create at least 6,000 construction jobs and add more than $3.3 billion to the city's "economic output."

While the development sparked public outcry to protect the Empire State Building's spot on the New York skyline, ultimately the prospect of thousands of jobs and the promised economic boost won out.

Anthony Malkin, president of Malkin Holdings, the owner of the Empire State Building, said in a prepared statement: "The City Council is the decision maker on this subject. They have gone out of their way to listen to our position. In the end, they are the elected representatives of the City of New York, and it was up to them to decide."

Mayor Michael Bloomberg too expressed support for the new tower. "Competition is a wonderful thing," he said early this week.

In addition to the approval of 15 Penn Plaza, the council passed legislation (Intro 87) that would require more disclosure from landlords, making it easier for tenants to contact them.

Currently, owners of multi-dwelling residences are not required to list personal contact information in their annual report to the city. Much of the time, according to council officials, a landlord will list the name of a limited liability corporation or a management company instead of his or her personal information.

Under the bill, which was approved unanimously, any person who owns more than 25 percent of a multi-unit dwelling would have to list personal contact information.

Gay Marriage Out of State

Now that the State Senate has blocked the approval of same-sex marriage, Quinn, the City Council's first openly gay speaker, is making sure gay New Yorkers who want to tie the knot know where to go.

Under legislation (Intro 260) approved by a vote of 47 to1, the City Clerk's office will be required to post on its Web site and hand out at its office information on where gay New Yorkers can get married, including states and international destinations. It will also have to provide couples information on what rights they are entitled to here in the Empire State.

"I hope it's a message to the State Senate of how sick and tired we are of waiting for marriage equality," Quinn said.

The only member to vote against the bill was newly minted Councilmember David Greenfield of Brooklyn.