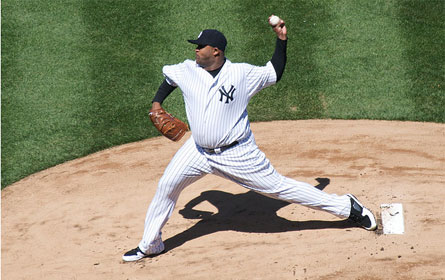 Photo by Chris Ptacek
The city’s Economic Development Corp. has little to do with Yankee pitcher C.C. Sabathia's won loss record, but it did play a major role at in creating his team's new home. Here, Sabathia pitches on opening day 2009 at the new stadium.

This article has been corrected. Please see details at the end of the article.

When business owners at Willets Point in Queens denounced Mayor Michael Bloomberg for proposing to take their property to build a hotel, convention center and new residential community, EDC, which planned and negotiated the project, stood in the shadows.

When the mayor's office, working with a local, non-profit development corporation, proposed a plan for Coney Island, EDC stood in the shadows behind a local subsidiary that it backed, the Coney Island Development Corp.

And when the mayor's office announced PlaNYC2030, the city’s Long-term Sustainability Plan, EDC stood in the shadows even though it had commissioned the study that preceded the plan and contracted with the management-consulting firm responsible for putting it together.

In the last eight years the EDC has sponsored over 500 projects, including some of the largest new developments in the five boroughs and citywide. With this portfolio, EDC probably has more to do with planning the city -- where, how and when new development happens -- than all the city agencies that are entrusted with doing so. Despite that, the agency receives little scrutiny or even attention.

Perhaps it was only in the final stages of the recent and failed Kingsbridge Armory Project in the Bronx, which would have handed over the vacant property to the Related Corp. for development of a mall, that EDC's role as intermediary between developers and the mayor's office emerged clearly into the sunshine. EDC had spent years brokering the deal only to find that the community/labor coalition it had engaged would not back down on the issue of a living wage for workers at the proposed mall.

What is this city entity that is sometimes called quasi-governmental, a city agency or an arm of the mayor's office? Despite its name it is not a private corporation or financial institution, nor is it an independent public authority like the Metropolitan Transportation Authority or the Port Authority, entities Robert Moses helped invent to protect decision-makers from public oversight.

EDC is a non-profit that is wholly owned and financed by the city. The mayor appoints its board of directors, and most of its budget of over three quarters of a billion dollars comes from the city.

EDC's stated mission is "fostering economic growth." It does this by responding to private-sector proposals and helps to pave the way for their success. With New York advertising itself as the "Real Estate Capital of the World," major real estate deals including malls, condos and business centers, get special attention from EDC. Since an uncontested doctrine links the city’s economic health to its ability to keep the cement mixers going, growth is usually assumed to be good.

A Corporation Inside City Government

Though entirely under the mayor's control, EDC is set up to work more like a private corporation than a city agency. The mayor appoints its directors without having to worry about incidentals such as unions and civil service regulations. EDC boasts that it promotes "public service with a private sector culture," and has an "operational flexibility" that leaves it free from many of the agency rules and procedures that often hold back innovation and change. This preference for the private model is clear when you go from the city's public website with a dot.gov address to EDC's website with a dot.com address.

Since taking office, City Comptroller John Liu has repeatedly faulted the EDC for the way it operates. Last spring, his office released an audit charging the EDC had failed to turn over $125 million to the city, and more recently he criticized EDC officials for spending too lavishly on international trips. Overall, Liu has said, the agency's operations lack transparency. “It has become a powerhouse agency, but we have very little understanding of what comes in and out of it,” he said. “You cannot see anything that is going on.”

Last month, the Industrial development Agency, a part of the EDC, issued new rules designed, officials said, to increase transparency and accessibility but denied they had anything to do with Liu's criticisms.

A key to EDC's "flexibility" is its internal structure, more like that of a private corporation than a city agency. Its current executive director, Seth Pinsky, like previous chiefs, comes from the world of finance and real estate. Under him are 13 vice presidents, a chief operating officer and chief financial officer -- no bothersome departments and directors that can't be moved around or kicked out by the CEO.

Below the executives is a legion of mostly young professionals who enter and exit through EDC's revolving doors as they learn the ropes and discover that the real power and money is with the companies with whom the agency is supposed be a partner.

Like its staff, EDC itself is young. It was born in 1991 out of a merger of two previous non-profits, the Public Development Corp. and Financial Services Corp. The Public Development Corp., founded in 1966, turned out to be a useful vehicle for the negotiation of tax benefits and subsidies that purportedly prevent the flight of jobs and capital from the city, and these functions continued and grew.

EDC also has ended up running some projects that haven't been able to find a home anywhere else in the city government. For example, it is in charge of four city markets, including the innovative and successful Essex Market on the Lower East Side and La Marqueta in East Harlem, which has yet to prove sustainable.

These potentially vital neighborhood markets, however, are dwarfed by the multiple mall and supermarket projects fostered and financed by the group, including what could become the city’s first Walmart. More small-scale local markets could help bring healthy, fresh food to every neighborhood, especially at a time of food-related epidemics such as obesity and diabetes. In short, EDC's approach to economic development seems to mirror the preferences of the larger businesses in the private sector and direct public funds in their direction.

Despite having one foot squarely in the private sector, EDC is considered the "lead agency" on just about every major development proposal. Even though it's not a city agency, it has become, in effect, the city’s most significant entity for land use planning.

While the New York City Planning Department boasts of having done more than 100 rezonings since 2002, these only change regulations, while EDC actually negotiates the deals with major developers that determine what gets built. EDC's planning is always limited to the individual project and does not necessarily extend to neighborhoods or the city as a whole. But neighborhood-level and citywide planning rarely occurs in this city. Unlike other major U.S. cities, New York has never had a comprehensive master plan except for a 1969 draft that never even received a hearing at the City Planning Commission. Although there have been some 100 community-based plans, only ten have been officially supported and adopted.

When it comes to buying and selling land for development, EDC plays a critical role, even though it often has to work through other city agencies. EDC tells the mayor’s office what land and other forms of subsidy the private corporations say they need, and the mayor can then direct appropriate city agencies to act. This means that EDC is in the pilot's seat when it comes to long-term planning.

Because of the corporation's unique commitment to "public-private partnerships," its plans tend to support those of private developers whereas the presumption is that city agencies should operate in the public interest. For example, EDC issued a Request for Expressions of Interest for the Willets Point project in Queens. The responses, submitted by private developers, shaped the physical plan and zoning that were finalized by city agencies and approved by City Council.

EDC's general procedure of following the lead of private developers has recently taken over one area that it was previously excluded from -- affordable housing in urban renewal areas. These were normally under the jurisdiction of the Department of Housing Preservation and Development, the city’s housing agency.

EDC is now, however, the "lead agency" responsible for developing a plan for the Seward Park Urban Renewal Area in the Lower East Side. For years, many community groups have insisted that the vacant land there be redeveloped for low-income housing, since the tenants who were displaced by the government’s “slum clearance” program were low-income and the city promised low-income housing would be built. EDC's emergence as the lead player, particularly in the last decade when just about every new large-scale luxury residential project has a small component -- usually 20 percent -- of "affordable housing," suggests that "public-private partnerships" driven by market-rate development are supplanting initiatives in which the public sector takes the lead.

One of EDC's most impressive powers is its ability to contract out studies and planning without having to go through competitive bidding or rely on the city's experienced professional staff. EDC was the conduit for important public documents such as the city’s 2007 Long-term Sustainability Plan, PlaNYC2030. Its citywide Waterfront Vision and Enhancement Strategy (WAVES) promises to set the pace for waterfront development in the decades to come and go far beyond the Department of City Planning's Comprehensive Waterfront Plan proposal.

Whether EDC does better planning and development because of its special position and powers is an open question that we might all disagree on. But EDC has assumed critical government planning powers that the City Charter and local law give to city agencies. By negotiating and making decisions in the shadows, EDC can avoid the sunlight that helps citizens understand what is getting developed and decide whether they want it or not. We may know what EDC's executives say to the public through their public relations office but little is know what is said in their exclusive discussions with developers.

CORRECTIONS: This article originally reported the EDC has seven vice presidents. It has 13, including executive vice presidents. In addition, a spokesperson for the agency said it can acquire and dispose of property. Due to an editing error, this article originally said that the EDC issued new rules to increase transparency. The rules were issued by the Industrial Development Agency, which is part of EDC -- not by the EDC itself. The copy has been edited to reflect these changes.

Finally, due to the editor's oversight, the article did not mention - but should have -- that Tom Angotti was a member of City Comptroller John Liu's task force on community based agreements.