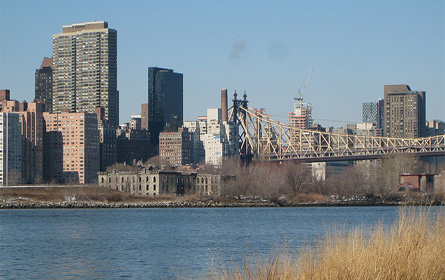 Vision 2020, New York City's plan for its waterfront, seems to offer something for every New Yorker: promenades along the shore, bucolic wetlands with lots of fish and wildlife, ferries and kayaks, industrial jobs, and new condos with waterfront views.

Looming behind the plan's picturesque images of clear skies and kayakers, however, are the waterfront views from prime real estate locations. Behind the frothy rhetoric designed to garner public support, Vision 2020 is really a business plan.

Overall the plan envisions parks and natural habitats. It also anticipates creating infrastructure that would allow industrial areas -- smaller than they once were -- to thrive. And it calls for new housing "for people of diverse income levels."

Public access, natural restoration, industrial and commercial development â€“ all reflect the interests of those who own land on and near the waterfront. Public promenades and parks on the waterfront will be valuable amenities for luxury towers, as will the "panoramic water views of great beauty."

The few natural areas in the plan are to be in locations that are not prime targets for large-scale development such as Jamaica Bay and along the Arthur Kill on Staten Island. They will be preserved as museum-like exceptions along the 578-mile coastline that is being masterfully engineered for the fun and profit of humans. The industry and public utilities on the waterfront will be allowed to stay where they are, although the plan does not address the negative environmental impacts of these industrial areas on surrounding communities.

In short, the city’s long-term plan for the waterfront, a revised version of the original 1992 plan, continues the trend toward conversion of the coastline from a working waterfront to prime real estate. It is perhaps fitting that the main feature in The New York Times about the city’s waterfront plan appeared in the Real Estate section.

Even with construction stalled by the recession, the article said, "The groundwork is being laid for the next great phase of waterfront development in the city." Casting a covetous eye at the Queens and Brooklyn waterfront, Jeffrey Levine of Levine Builders told the Times, "It is a great opportunity to buy land and warehouse it for development."

The Mayor’s Team Dives In

The plan has won praise from many civic groups, who have essentially entrusted the future of the waterfront to city hall. In November, to promote and celebrate the 2020 plan, the non-profit Metropolitan Waterfront Alliance held a conference that outlined the future as seen by the city's leading policymakers. Alliance board chairman John Watts praised Mayor Michael Bloomberg as "the waterfront mayor."

The 2020 plan has one important new element â€“- the plan to literally dive in the water. At the waterfront alliance gala, Deputy Mayor for Economic Development Robert Steel introduced this new element by calling for development not just on land but in the water. Steel said, "The waterfront is the sixth borough" -- just as important as the other boroughs. City Planning Commissioner Amanda Burden chimed in, saying, "The water is the heart of the city," a new territory to be explored. "Now is the time," she said, "to go from the water's edge into the water."

The plan envisions the waters surrounding the city to be so clean that people can swim, fish and boat in them. And it claims that more ferries and boat traffic are both possible and necessary.

Developers have sought for decades, to build out into the water using deep pilings and new buildings on piers. That also could be what going "into the water" means.

A recent show at the Museum of Modern Art proposed alternatives to address seal level rise that included salvaging waterfront real estate by essentially making it "waterproof." Is the waterfront plan helping to encourage such dubious and expensive?

The plan does not address such possibilities. Nor does it confront global climate change, which could cause the sea level to rise and dramatically alter the waterfront -- both on the water and along its edge. David Bragdon, director of the Mayor's Long-term Planning and Sustainability Office, suggested at the conference that there may need to be changes in zoning to either "harden" or "soften" sections of the shoreline -- presumably make them more resistant to sea level rise or return them to their natural state. But no one echoed his concerns.

While the prospect of future building in the water may be much too risky even for the most aggressive speculators, some citizen activists think more safeguards are needed to protect the shoreline. Marcy Benstock of the New York Clean Air Campaign believes the waterfront plan "is an invitation to catastrophic storm damage" and wants the city to "stop subsidizing development in, on or near the water." Benstock sees a connection between the plan's call for streamlining permitting on the waterfront and the stated interest by developers in lowering environmental standards.

Another cautionary voice comes from environmental justice advocates. The NYC Environmental Justice Alliance claims that the 2020 plan does nothing to address a major problem with the 1992 plan: the polluting facilities that are part of much of the working waterfront and tend to be in and adjacent to low-income communities of color. The 2020 plan has minimal requirements for public access and amenities and offers no guarantee that environmental and public health issues will be addressed.

While Burden acknowledged environmental justice concerns in her speech at the November conference, these have yet to translate into more rigorous regulations governing industrial uses on the waterfront or anything other than token amenities for residential communities.

In the current financial climate as many upland real estate deals dry up, the lure of waterfront views may very well grow in importance. With a goodly stock of vacant condos sitting on the Brooklyn and Queens waterfronts, however, the city's economic gurus may find it hard to entice even more development to the shore.

The leading role of the city's Economic Development Corp. in waterfront planning suggests the focus will be on business generators. EDC is a non-profit corporation controlled by the mayor's office. The business-friendly entity was set up to run like a corporation and negotiates major development deals. 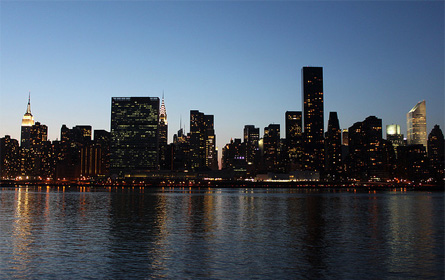 Photo by Joseph A
Views, like this one of Manhattan from Long Island City's waterfront, could be particularly valuable in today's tough real estate market.

Vision 2020, developed by the city planning department, is actually but one piece of the city’s waterfront plan. Vision 2020 falls under the larger umbrella of the city's WAVES (Waterfront Vision and Enhancement Strategy). Few details about WAVES, launched in April 2009, are available on its web site. The other major component of WAVES is the Waterfront Management Advisory Board, a body made up of 12 mayoral appointees that claims to be responsible for implementation. Little is known about the functioning of that board.

Economic Development Commission Executive Director Seth Pinksy focused his comments at the Metropolitan Waterfront Alliance conference on developing the industrial and maritime waterfront and reforming the regulatory regime. From its founding by the Dutch up until the 1970s the most active parts of the city’s waterfront were those used for commerce and industry. Many stretches of water, especially outside the busy ports in Manhattan, Brooklyn and the Bronx, were quiet places for rest and relaxation for residents living within reach. There also were, and still are, many public utilities including sewage treatment plants, power generators, and waste transfer stations dotting the waterfront. Some sections were inaccessible to the public, blocked off by highways and other barriers.

In the 1970s, as shipping containers replaced the old system of unloading bulk cargo using cranes, ports need large amounts of land to store the containers. The city's port facilities moved to New Jersey, where the land was a lot cheaper. This change opened up new territory for the city's residential real estate industry, especially along the stretches of the Brooklyn and Queens waterfront where "waterfront vus" of the iconic Manhattan skyline promised high rents, sales prices and investor windfalls.

While developers scrambled to buy up derelict waterfront properties, city government dallied, failing to develop any comprehensive plan for the waterfront until 1992 when the City Planning Commission approved the first Comprehensive Waterfront Plan. One year later, the commission approved waterfront zoning, which codified a new system for private waterfront development. Waterfront zoning requires that developers of new residential and commercial facilities provide public access along the water's edge and keep public corridors open so that people from the surrounding communities can see and get to the waterfront. This zoning mechanism was based on the idea of creating public open space through public-private partnerships instead of publicly funded park development.

After almost two decades of experience with the city’s waterfront zoning, it would appear that it has made it far easier to rezone the industrial waterfront for upscale high-rises in neighborhoods, even when there is intense opposition by waterfront communities. According to Burden, over 1,000 acres of waterfront land has been rezoned since 2002. In her comments, he did not mention, however, the fierce zoning fights in strategic locations like Greenpoint and Williamsburg in Brooklyn.

Over the years more parks, promenades, bicycle paths and other public benefits have been built on the waterfront. While all New Yorkers and visitors use them, they have come at a price. These amenities could have been much larger and served many more people if they did not depend on having new high-rise development that hems in the public waterfront and uses it for its own front yard.

Vision 2020 does not address huge differences among planners, community residents, and other New Yorkers over what to do with the city’s waterfront. All but one of the speakers at the waterfront alliance conference ignored the sharp conflicts between visions, and the even more serious problems implementing the visions.

Chris Ward, executive director of the Port Authority of New York & New Jersey, recognized the problems as he ticked off several "conflicting priorities." For example, both the 1992 and 2010 waterfront plans called for full reactivation of the 65th Street rail yard and old Long Island Rail Road line in south Brooklyn. Opposition from surrounding communities and other obstacles continue to stand in the way, yet that is still part of the plan. There are conflicts between the future vision for Governors Island as a haven for open space and recreation, on one hand, and proposals for more intensified use of the nearby Red Hook Container Terminal on the other.

Ward seemed to suggest that time would better be spent recognizing and trying to resolve the conflicts instead of hoping they could be resolved by another plan. Since Vision 2020 leaves large gaps when it comes to big issues like environmental justice, high-rise development on the waterfront and in the water, sea level rise and the limitations of public-private partnerships, many in city government and the civic community continue to look beyond the plan.