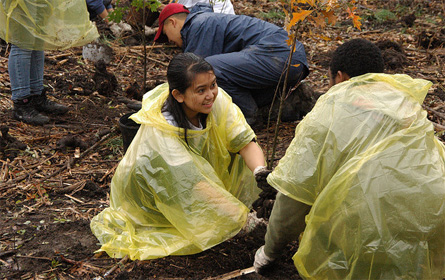 Photo by 350.org
The city's push for sustainability has helped spur New Yorkers to get involved in activities such as planting trees and improving the energy efficiency of their homes.

In just four years, PlaNYC has proved itself a remarkably valuable planning tool for New Yorkers, with unprecedentedly broad reach. In accessible language, it presents a unifying vision linking hundreds of components that go into New York City's environmental sustainability, from stormwater management to brownfields remediation to energy efficiency retrofits. Updated last month, PlaNYC provides a vision and guide to anyone seeking to do their part to improve the city's environment and reduce its carbon footprint.

In short, PlaNYC provides an overarching vision for New York City’s growth. While much of the plan -- both the original and the update -- addresses actions to be taken by government agencies, numerous objectives require mobilizing the rest of New York City â€“ especially businesses, community-based organizations, labor unions and other groups that can advance PlaNYC’s goals. This knowledge is empowering. It enables the community-based organizations and businesses that the Pratt Center works with to orient their efforts to work toward specific sustainability goals, whether by planting trees, investing in energy efficiency upgrades, developing affordable housing, or through a host of other activities.

Yet while PlaNYC provides important guidance for neighborhood-level sustainability projects, it does not involve New Yorkers in creating the PlaNYC vision itself, or holding PlaNYC's creators accountable to achieving their commitments. What’s more, PlaNYC takes an end-run around the governing document of New York City, the City Charter, and the democratic process.

The Public and Planning

For much of the 20th century, the City Charter included a mandate for a master plan, but it proved unworkable. More recently, New Yorkers amended the charter to foster public participation in city planning. Section 197-a of the charter enables community boards and other groups to propose community-based plans for their neighborhoods' future development, and gives those plans official stature as part of the city’s land use resolution.

The City Planning Commission has approved 11 of those plans. The very drafting of them serves as vehicle for building neighborhood-wide consensus around planning priorities and for advancing them through the political and budget processes.

Yet in its own planning the city has largely ignored 197-a plans. In Williamsburg and Greenpoint, the city's rezoning fundamentally contradicted the neighborhoods' 197-a plans.

The complexity of implementation across city agencies has contributed to the plans' gaining so little traction. Another problem is that community boards must devise their visions in the dark, without knowledge of the city's own strategic priorities for the very same geography. If the city finds the plans unworkable, it is to some degree a self-fulfilling prophecy.

The charter also promotes public participation in planning through the Uniform Land Use Review Procedure, or ULURP. Community boards get an advisory vote on proposed land use changes, all of them site-specific.

ULURP too, however, has suffered from a lack of a transparent and enforceable framework for planning in New York City. Needs that are inherently neighborhood, borough or citywide in scope -- notably for affordable housing and school capacity -- end up being addressed through individual land use decisions, often project by project. The result has been uneven and often highly inequitable distribution of both the benefits and burdens of development.

As its name indicates, ULURP focuses exclusively on land use decisions, reflecting the early 20th century view of planning as strictly a matter of building height, bulk and type of use. PlaNYC vividly reminds us that the development of a sustainable city involves many other dimensions and an obligation to update public participation to reflect the realities of planning today.

The mayor’s new director of long term planning and sustainability, David Bragdon, should be well prepared to lead the way to a meaningfully public PlaNYC. As president of Portland, Oregon's Metro Council, Bragdon oversaw the Portland Plan, a visioning process that engaged 17,000 residents and provided direct input into the city's comprehensive plan, which is now going through a public review.

New York City is the only large city in the nation that does not have a comprehensive plan. The size and complexity of our metropolis make such planning challenging, but not impossible -- and in fact, imperative. A public review process of the kind that Portland used offers an important opportunity to get New Yorkers engaged and invested in planning for neighborhood growth -- and sustainability.

PlaNYC suffered a serious blow early on precisely because it lacked such engagement. As introduced on Earth Day 2007, PlaNYC called for charging people to drive into Manhattan’s business districts. Loud opposition immediately drowned out he congestion pricing plan, and efforts by the Bloomberg administration to rally popular support came too late. While the mayor and his staff had consulted planners and environmental groups, they had not pursued a community-engagement strategy ahead of the plan’s release. The administration had to abandon congestion pricing.

To its credit, the Mayor’s Office of Long Term Planning and Sustainability has learned from that mistake and begun to take meaningful steps toward community engagement. This time around, it held a series of sessions with leaders of community-based organizations.

Some of the ideas from these sessions are highlighted in the most recent edition of PlaNYC, such as this statement from Ana Dioguardi of Queens Community House: “I think that low-cost housing for families earning $40,000 or less is the number one thing many neighborhoods in the city need." Notably, though, the Queens initiatives highlighted in the plan itself, Hunters Point South and Willets Point, will provide relatively little housing for low-income households.

In addition, this month the city will launch its Change By Us social media site, which will help grassroots environmental projects working in support of PlaNYC’s goals to connect with neighbors, volunteers and other activists.

All of this activity represents a step forward. But it does not disguise the fact that PlaNYC is a document that is both top-down in its origins and accountable only on the terms its creators set. That needs to change. PlaNYC needs to be more than a public relations document; ultimately, it must be something that the city as a whole can meaningfully contribute to, and that is more than a shadow planning process.

For this to happen, the City Charter needs updating to make New Yorkers part of the process not just on individual land use decisions, but on more comprehensive strategic planning about the future of New York City. Last year's charter revisions made only minimal adjustments to existing land use provisions; a future Charter Revision Commission can and should do much more.

One step would be to transform PlaNYC from a project of the mayor's office to a charter-sanctioned civic body akin to the City Planning Commission, with representation that includes appointees from not only the mayor but other city- and borough-wide elected officials, as well as community board review.

PlaNYC could also assign each community board to identify its preferred measures to advance specific PlaNYC goals within its district boundaries. Routine participation in key decisions across all neighborhoods would help build a culture of local responsibility around planning and sustainability. That, in turn, would redirect energies away from NIMBY and into more constructive directions. It also would help reduce the unfair advantage wealthy communities now have over poorer ones in their ability to get their needs addressed through the planning process.

Finally, PlaNYC could build sustainability on the foundation of the City Charter's fair share provision. This requires that siting decisions for city-sponsored facilities, including power plants and waste transfer facilities, consider whether neighborhoods are already disproportionately burdened. PlaNYC could identify metrics -- from park access to air pollution levels -- that would allow the city to set targets for reducing the environmental burdens that growth places on our most vulnerable communities.

Such community engagement will require investment. Community boards need the expertise of planners, and the boards themselves need to become more reflective of the communities they represent -- both things beyond the ability of PlaNYC itself to change.

But PlaNYC won't be complete until it goes through an actual public process that shapes implementation. Public participation cannot be just a media project. The administration must now fulfill the opportunity it has created by giving New Yorkers a meaningful stake in PlaNYC’s direction and execution.

Alyssa Katz and Eve Baron are senior fellows at the Pratt Center for Community Development. Baron coordinated the Campaign for Community-Based Planning.