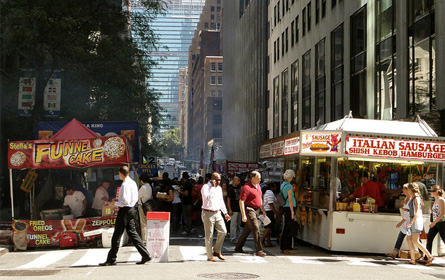 Photo by bitchcakesny
Critics complain street fairs like this one in Manhattan cost the city money, clog traffic and are too monotonous. But people come out for them all the same.

New Yorkers will have fewer sausage and lemonade stands to frequent this spring and summer.

The Bloomberg administration is limiting the hours that street fairs can operate and restricting how far they spread out. Citing budget constraints the city is cutting the number of police officers available to provide security at the events. And it also plans to discontinue some long-standing street fairs.

The new policy will please New Yorkers who are bothered by the traffic disruptions the fairs cause and the monotony of many of them. But those who enjoy the events will have fewer chances to browse costume jewelry racks while eating funnel cake. Vendors, production companies and the organization sponsoring the fairs all face a loss of profit. And while the city's new rules may save money, experts on the fairs says the chance will do little to nothing to address the dreary sameness affecting many of the al fresco bazaars.

The number of street fairs citywide faces a roughly 25 percent reduction this year, and large events cannot be held on the same strip within subsequent weeks. A street festival, to use the city's term, is defined as "a street activity requiring a multi-day and/or a multi-block street closure," by to the Office of Citywide Event Coordination and Management's website.

It’s street fair season and a number are on top for this weekend.

Last year city streets hosted 321 fairs that generated $1.6 million in revenue for the city. But the city also paid police $4 million in overtime to watch over the festivities. Under Bloomberg's proposed cuts there would be roughly 240 fairs this year.

To cut back further, the city is denying permits to traditional street fairs seeking new sponsorship in an effort to limit how many will operate this year. Long-running fairs in Brooklyn on Cortelyou Road and Ditmas Avenue and a Church Avenue Street Fair has been canceled because the original director, Rabbi Zvi Florence, passed away in March, and the city would not transfer the permit to a new official.

"For anyone to call this a 'new fair activity' rather than an extension of the previous 25 years has never been to our Church Avenue Fair," Larry Jayson, president of the Abermarle Neighborhood Association, told city officials in a letter in late April. "This is the same fair, same location, same event, just new sponsorship."

As street fair season begins, operators are trying to adjust to the new rules.

"In some cases some of those events were not practical," said Robert Ashe, on-site manager for Clearview. "For the vendors, operating from 12 to 5 instead of 11 to 6 drastically affects their business."

Clearview will host 17 fewer fairs this spring and summer than last year, when it organized about 100 fairs. The company held its first 2011 street fair on March 19.

Robin Redmond, executive director of the Flatbush Development Corp., which coordinates the Flatbush Frolic, an annual seven-block street fair in September, worries that ending the fair at 5 p.m., an hour earlier than last year, could reduce profits and deter businesses and artists from participating.

"Vendors will receive a better return toward the end of the day," Redmond said.

The economics of street fairs in New York involve production companies, like Clearview, that receive a commission based on the vendors they attract. Sponsors, such as Flatbush Development, cover vendors' operational costs. In return, vendors pay a fee for the space they rent. They make profit based on how much money they generate in sales.

Redmond is requesting a special permit from the city to extend the fair an extra hour, but then vendors would not be able to arrive at their stations as early as in past years to set up their stands. Redmond believes the new rule may turn away potential new vendors but longtime partners will continue to take part in the Flatbush Frolic.

"We think our vendors will still be happy," Redmond said.

While the mayor's policy will save the city money, it does little to promote more diverse fairs. Jonathan Bowles, director of the Center for an Urban Future, a public policy organization focused on improving the city, believes New Yorkers seek a shift away from the ubiquitous mozzarepa, sausage and lemonade stands that he calls "more or less the same."

Just scaling back on street fairs is missing the larger point," Bowles, the coauthor of a study on street fairs, said. "The answer is a little more complicated."

City Councilmember Daniel Garodnick, who chairs of the Committee on Consumer Affairs, is drafting bills to encourage local businesses to participate in street fairs more and to promote communication between community boards and vendors.

"There's mainly soulless, corporate enterprises made up of socks and sausages," Garodnick said. "The city is granting permits to the same groups year after year. It should allow new groups to participate."

He suggested that production companies require vendors to submit requests to encourage a wider variety of vendors to apply for booths. Bowles believes new vendors should be offered discounts on renting their spaces as an incentive for them to sell their merchandise in street fairs.

Street fair production companies have "had a long time to improve what they do and have had little incentive to change the system. Some competition might be a good thing," Bowles said.

The Bloomberg administration's policy that prevents street fairs from obtaining new sponsorship may make the current situation worse, according to Bowles. "The unintended consequence is that it stifles innovation by not opening them up to new sponsoring organizations that want to be more unique," he said.

Garodnick also is proposing legislation that would require street fairs to post their location on a city website at least one week prior to the event.

His constituents have complained about the traffic changes made by street fairs. Streets are closed off as long as the fair is set up on that day.