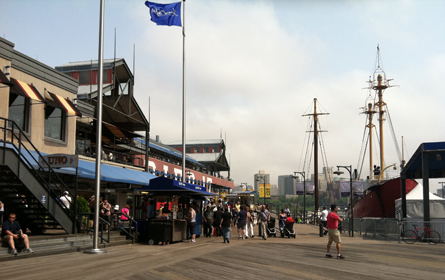 Photo by Vicky Plestis, Gotham Gazette
Pier 17 at South Street Seaport could be demolished under plans to redevelop the area.

After 40 years of widely criticized development at the South Street Seaport, yet another company is about to make another try to get the venerable neighborhood right.

In January the Howard Hughes Corp., a spin-off of General Growth Properties, confirmed it was reviving development plans for South Street Seaport. While it has begun preliminary discussions with SHoP Architects, it has yet to release the design plans.

Doing so is particularly important for an area scarred by failed development projects. The direction the Howard Hughes Corp. chooses to take holds large implications for the future of the South Street Seaport neighborhood and whether it will continue as a symbol "urban renewal" or a finally emerge as a vibrant, historic community and commercial space.

Down to the Sea in Shops?

The seaport area, home to some of Manhattan's oldest architecture, has been the focus for development and revitalization projects dating as far back as the 1970s. Yet after 40 years of development, the neighborhood is far from successful.

In the 1980s, the development of the mall by the Rouse Co. was seen as a way to draw visitors to the area and help the museum's finances. Despite the commercialization of the area, the Seaport Museum of New York still faces financial trouble, taking out numerous loans over the past five years to cover its increasing debts.

The museum must deal with few visitors, on top of what founding president Peter Stanford has called mismanagement by museum chair Frank Sciame and president Mary Pelzer. As a result, the museum has closed its landside galleries, placed 32 staff members on unpaid furloughs and is in talks to remove the neglected historic boats from Pier 17.

The mall, opened in 1985 as a "festival marketplace," akin to Harborplace in Baltimore and Faneuil Hall in Boston, has also had its problems. Residents have blamed the mall for distorting the area's historic atmosphere and driving up property values, forcing out local residents and businesses.

The seaport "was never meant to be a mall," said Robert LaValva, founder of the New Amsterdam Market and a prominent critic of the development that has occurred in the area.

In 2008, General Growth Properties concluded the solution to these development difficulties was more development. It began plans with SHoP Architects to tear down the Pier 17 mall and in its place build a series of two-story retail buildings and a six-story hotel.

General Growth also planned to construct a 42- story condominium tower at the foot of Pier 17 over the Fulton Fish Market.

To Shop or Not to Shop?

Howard Hughes Corp., which holds a long-standing lease on Pier 17, has now taken up the area's development. While any design is only in its preliminary stages, eventually the final plan must go through the Uniform Land Use Review Procedure, or ULURP, which requires approval from the City Planning Commission and the City Council. Considering how divisive the 2008 plan was among Lower Manhattan residents, the new plan could face serious obstacles. Its ultimate success will depend on its ability to unite the diverse community visions for the Seaport.

Julie Menin, board chair of Community Board 1, which began preliminary evaluations of the 2008 development plan, stressed the need for more retail.

"There have been more than 30,000 new residents [in Lower Manhattan] since 9/11. There's a tremendous amount of residential need for new retail," she said.

"I'm on holiday and someone said [the seaport] was a lovely place to come to,' said one tourist from Belfast. "And there's Abercrombie for the kids."

"We'll definitely be coming again. We’ll come back to the mall," said a visitor from New Jersey.

Yet many local community groups oppose the massive commercialization of the South Street Seaport, which they think detracts from the area's rich history as one of New York's oldest districts.

Simeon Bankoff, executive director of the Historic Districts Council, an advocacy group, said that if the new plan was "anything similar to what General Growth was proposing three years ago," his organization would be "unalterably opposed."

"They were proposing a completely out of scale, inappropriate tower that would dwarf the entire district and change the landscape. They were going to demolish the historic Tin Building and create some faux copy of it. The list goes on and on and on," Bankoff said.

The Fulton Fish Market, which consists of the market stalls on South Street, the Tin Building and the New Market Building, is a particular point of controversy for development plans. A community rally on May 25 emphasized the need to preserve these historic buildings. Although the market moved to Hunts Point in the Bronx in 2005, its original buildings at the seaport remain vacant, used only for parking.

To LaVala, public involvement in whatever comes next is key. Although the area's streets are closed to traffic, making it " feel like a suburban shopping mall," the city owns the fish market, the surrounding streets and many buildings in the area, he said.

"Because they are owned by the public, the public should become more involved with determining the future of this place, which is a nearly intact 19th- century wholesale market district, a priceless asset of this city and a monument of worldwide significance," LaVala continued.

LaValva founded the New Amsterdam Market to in 2005 to, he said, "preserve and rekindle the original vision for the Fulton Fish Market." It now is open only on Sundays during the summer, although he would like to see it become a permanent fixture in the district.

Space by the Sea

Another key issue for residents is open space. Menin said that many community board members who leaned toward backing the 2008 development plan did so because they believed it would create more public space in the area. General Growth "had talked about building a park space and a large community center,” said Menin.

Critics, though, claimed the plan would tie up the area with so much of the space devoted to retail and the proposed hotel.

"Essentially, it's a hotel complex that other people will be able to walk around," said former New York City councilmember Alan Gerson, a major critic, in 2008.

The 2008 plan "would have ruined the Seaport altogether," LaVala said. LaValva. “"t would have been made into a luxury residential area that felt accessible to only those that could afford it."

The Howard Hughes Corp. will face a challenge in considering all the competing demands. Any effective design must carefully balance retail space with public space for the community-- all while respecting the character of the South Street Seaport. It also must satisfy the many people who do not like what the area is today.