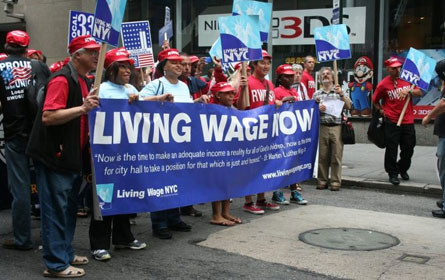 Linda Archer, 58, spent years working double shifts as a nurse's assistant at St. Luke's-Roosevelt Hospital while she was a single mother.

But since the recession hit, finding a job has not been easy. Archer moved into her mother's one-bedroom apartment to make ends meet, and after looking for a year for clerical work and doing temporary jobs, she finally found a permanent position as an hourly employee at McDonald's, where she earns $7.45 an hour.

"That's all I could find, I can't find anything else. It was the bottom -- rock bottom," she said.

Archer has an associate's degree from Elizabeth Seton College, now a part of Iona College*. She wants to go back to school but can't afford it -- there aren't scholarships for older people, she said, so she would have to take out student loans.

It is people like Archer -- and thousands of other New Yorkers with similar stories -- that some City Council members and activists say would benefit from the Fair Wages for New Yorkers bill, now awaiting City Council action. A hearing on it will be held Tuesday, Nov. 22.

As Occupy Wall Street captures headlines and supporters, many paint the Living Wage bill as a legislative step toward helping the "99 percent." The bill falls short of some protesters' demands for a $20 dollar minimum wage, but supporters say it is a crucial -- and realistic -- step to help working New Yorkers rise above the poverty line.

What a 'Living Wage" Would Do

Most commonly called the Living Wage bill, the legislation would raise the hourly wages for jobs created in city-funded developments to $10 an hour with health benefits or $11.50 an hour without them. Studies show that that is what New Yorkers need to earn to stay out of poverty. The current minimum wage of $7.25 an hour, they say, forces many people who work to live in poverty.

Archer says she generally works about 30 hours a week -- she can-t find a full-time position -- and make $223 a week before taxes. That's just $10,728 a year. Under the living wage bill, if Archer found a job working the same number of hours in a development that is subsidized by the city and therefore covered under the bill, she would make an extra $92 a week for a total of $15,120 per year before taxes.

The requirement only would apply to future jobs in developments, such as shopping malls, that received a tax break or other subsidy from the city. Supporters say city tax dollars should go toward creating good jobs, not ones that keep people in poverty. Critics say the bill would kill jobs before they are even created.

The bill's current incarnation -- after a round of business-interest supported amendments -- now affects developments for the first 10 years after they receive any subsidies, and excludes manufacturing firms, companies with less than $5 million in annual revenue and those that receive less than $1 million in city subsidies.

Most say they can't predict how many jobs such a bill would affect -- estimates range from a few thousand jobs to many, many more.

The bill promises to be the focus of much debate at City Hall.

The Retail, Wholesale and Department Store Union (RWDSU) has led the union lobbying efforts on behalf of the bill. Over the past year, the union has pushed the "argument that this is a pragmatic, common sense bill that will help working people, our local economy, and businesses in the city, Dan Morris, a spokesman for the union said. He said the union has arranged for civil rights leaders like Rev. Al Sharpton, other clergy, and constituents to lobby City Council leaders. A massive protest is planned for Monday, the day before the council hearing, at the Riverside Church.

The Manhattan Chamber of Commerce is leading the opposing lobbying efforts, bringing small business owners to meet with council members to discuss the effects of such a bill. The Real Estate Board of New York sent a letter to City Hall last week, charging that the bill would limit affordable housing and hurt efforts to expand and create businesses in underserved neighborhoods. The letter, organizers say, is the first part of a more aggressive campaign to fight the living wage bill.

Both sides have cited wildly conflicting studies on the effects of the bill in New York City. Amid all the arguments, though, the fate of the measure rests largely on the shoulder of one person: City Council Speaker Christine Quinn.

As the bill awaits action, people on both sides are waiting to see what Quinn will do.

"If she supports it, it'll pass, and I believe it'll even override the mayor's veto," said Councilmember Oliver Koppell, who is the bill's lead sponsor. "If she doesn't, it won't."

Mayor Michael Bloomberg, as Koppell noted, is expected to veto the bill if it passes; he has long opposed living wage legislation and recently compared it to communism. The bill currently has 30 out of 51 City Council members signed on as co-sponsors. Nothing in City Council, though, comes to a vote without Quinn's backing.

For Quinn, a likely mayoral candidate in 2012, the vote is a tricky one. To kill the bill by not calling it to a vote, as she did last year with a bill requiring that workers in the city get some paid sick days, would lose her supporters on the left; to support it would cost her votes from business owners. A former housing activist, Quinn has widely been seen as generally siding with Bloomberg in an effort to get his support and that of the business community. But she has occasionally strayed from that supporting measures to rein in city contracts, for example, or lashing out at the city's plan to tighten eligibility for homeless shelters.

So far Quinn is not tipping her hand. Pressed repeatedly on the issue at a press conference earlier this fall, she refused to comment on the specific legislation or the general concept of a living wage.

While supporters of the living wage say they have tried to address some of business' concerns and perhaps win Quinn's support -- business owners still vehemently oppose the bill.

"It's as bad as bad can possibly be," said Robert Schwartz, 70, who owns three shoe stores in Manhattan and Queens with 49 employees overall and salaries that range from minimum wage to $100,000 a year. Only four or five people make less than the living wage in Schwartz's stores -- Eneslow, The Foot Comfort Center -- but he said that this bill will still hurt his bottom line and his ability to expand.

"Nobody else has the level of taxes and cost of doing business we have here. There are fees to put signs up, you've got to pay to take care of the disabled," he said. "If there's going to be one more layer of costs we're going to have to add on, the chance that we're going to open up new stores is virtually non-existent."

CUNY professor and labor scholar Stephanie Luce has spent 16 years studying the living wage. She has written books and papers, and conducted in-depth studies on the effects of similar legislation as enacted in cities all over the country. "We've yet to find an employer who stood up and said 'yes, this hurt my job,'" she said. "If it was there, we would have been able to find it.

In some cities studied, like New Orleans and Los Angeles, the wage increases amounted to an average of less than 1 percent of each firm's overall operating costs. Santa Monica reported a 1.5 percent hike in operating expenses, which Luce said was one of the highest hikes in the cities she studied.

None of the thousands of employers surveyed in affected cities said the law affected their plans to expand, Luce said. "I have heard firms make this claim more generally, during a campaign, but found none that said [this] after the ordinance was in place," she said.

In her studies, Luce compared cities with living wage ordinances to those without and said she found little differences in job creation and business sustainability in the two groups of cities.

"There's lot of examples of firms who say they can't make it, but once they're mandated to, they do it and they can survive, she said.

Additionally, some firms reported transitioning part-time jobs into full-time jobs so they could to pay the lower living wage and give benefits to fewer people. This, the report found, led to higher worker morale and more productive employees.

The Bloomberg administration sides with them. The Economic Development Corp. commissioned a $1 million study by David Neumark, that found enormous potential losses for New York businesses if the living wage were implemented.

Neumark has a long history of opposing the living wage, and Luce and other academics have criticized the methodology, data used, and findings. Supporters of the living wage complain of bias.

Businesses, though, back his findings. Nancy Ploeger, the president of the Manhattan Chamber of Commerce, worries about the effects on blossoming entrepreneurs looking to start franchises. "No one is going to open a Subway if they have to pay $11.50 an hour, she said.

Mike Veneziano, the vice president of finance for Doherty Enterprises, a company that owns 50 Panera and Applebee's restaurants in New York, agreed. Doherty has a dozen new restaurants in the works, but he is worried about the legislation's possible effect on where to put those restaurants and their viability.

"We're really worried about it, and we're worried it's going to deter us from opening future locations and worried it will hurt existing businesses," said Cathy Coughlin, Doherty's vice president of human resources said. She said that most employees make more than minimum wage, but to start entry-level employees off at $10 or $11.50 an hour would mean the company would have to raise wages for long-term employees, too. "Restaurant operating profits are really minimal, so to shave away even more costs in this economy is a big concern to us," Veneziano said.

Luce said she accounted for what she calls a "ripple effect," where employers have to hike pay for employees earning more than the living wage to maintain wage scales internally. In Santa Monica, which was one of the hardest hit cities she studied, both the living wage hike and the ripple effect hikes accounted for 1.8 percent of average firms' overall operating costs.

Inside that average, however, restaurants felt the ordinance particularly strongly. They saw operating costs rise by an average of 10.2 percent.

Archer, meanwhile, is hopeful about her future despite the recession. "My son is grown up, so I can branch out. Now it's time for me," she said.

Before she can do that, she wants to find her own place. I live at home with Mom, we all know how that is, she said. As for school, she said she'd like to do a law degree, but first she needs to complete a bachelor's degree: I want to start small, even if I just get the pre-law. Just to get back there it's a start."

In the meantime, she hopes the speaker will vote for the bill: "We're looking to Christine Quinn to be that deciding vote. She can say, 'this is needed.'"