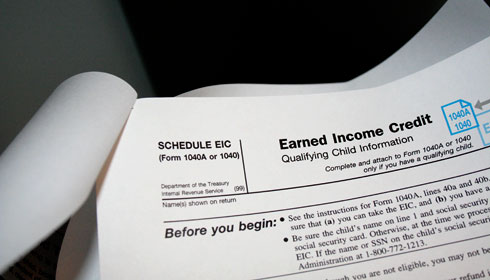 It's the tax season, and millions of working, poor New Yorkers are catching up on their bills. Whether it's paying for rent, childcare or groceries, tax time is an opportunity to reconcile past due notices, settle debts and start anew. While a range of tax credits targeting working poor tax filers has made the tax code a successful tool for alleviating poverty, the cyclical nature of the tax season creates a "feast or famine" condition for working poor families. That makes it difficult for these New Yorkers to achieve lasting financial security, but straightforward modifications to a popular and successful tax credit could change this for millions of people.

Working New Yorkers with low wages are eligible for the Earned Income Tax Credit (EITC), a refundable credit created by the Nixon administration as a type of "negative tax": If a household earns too little to incur a tax liability, the IRS sends the filer a refund. The Clinton administration seized the concept in an effort to "make work pay," and the EITC was vastly expanded. Now, families earning up to $41,646 can get a federal refund for as much as $4,824. With the New York State and New York City portions added, the credit can total up to $6,512.

These impressive figures make the credit a powerful anti-poverty tool. Each year, according to data from the Center on Budget and Policy Priorities, the credit lifts 5 million working poor people over the poverty line, and many of the beneficiaries are children.

EITC is also one of the most successful antipoverty tools. More people claim the EITC than any other publicly funded work support. About 85 percent of those eligible for the EITC claim it, compared to only 40 percent for food stamps (see related story) or 15 percent for childcare. While much of the successful uptake rate is because a routine filing of taxes -- all one has to do to get the credit -- carries less stigma than applying for Food Stamps, highly coordinated publicity campaigns have raised awareness.

But while the EITC combats poverty, it does not create financial security. The very purpose of filing taxes is to reconcile the income we earn over a year and the taxes withheld from our paychecks against the tax tables. However, poverty cannot be reconciled on a once-a-year balance sheet; it is a year-round condition. Not being able to make ends meet means that working-poor people are short on their rent in June, can't pay for school clothes in September or have to delay paying the babysitter in November. EITC does little to address financial insecurity, better one's ability to make ends meet or leave behind the paycheck to paycheck lifestyle.

A solution does exist, but barely. The Advance Earned Income Tax Credit (AEITC) distributes a portion of the EITC to a tax filer throughout the year in their earnings. For example, a parent with dependent children earning $11 an hour brings home about $1,665 every month. With the AEITC, that parent could bring home over $1,700, giving her a better shot at making ends meet. That same parent would still receive approximately $3,600 when she filed her taxes.

By adding a portion of the EITC to each paycheck, working poor New Yorkers would get a much needed raise. Research by the Center for an Urban Future and the Schuyler Center for Analysis and Advocacy indicates an overwhelming number of New Yorkers -- one in four -- do not have enough earnings to reach the threshold of a basic family budget. Without money to pay for necessities, they must make tradeoffs between rent, childcare or healthcare, and they cannot save for the future. These stark choices create "famine-like" conditions for families who work for low wages.

It is not surprising then that at tax time, the EITC becomes the "feast" by which families catch up on their obligations. In a study of low-income tax filers in North Carolina, the overwhelming majority (86 percent) said that most of their EITC would be spent on necessities. Another study revealed that half of the tax filers surveyed said that paying bills with their refund was their first priority, and for 83 percent of those surveyed, bill paying was among the top three priorities. It is clear that the EITC is a powerful tool for making ends meet.

Despite the fact that the AEITC can help alleviate this cyclical pressure by smoothing income throughout the year, the AEITC has the lowest uptake rate among all work supports: Less than 2 percent of those eligible for the credit apply for it.

Why does this solution barely exist? The most frequently cited reason is that many EITC recipients are unaware of the option. Tax filers also fear owing money to the Internal Revenue Service instead or do not let their employers know they are eligible.

Given the AEITC's ability to create financial security, and the immediate impact a universal raise would have on the economy, law and policy makers should consider modifying the AEITC program to increase participation. They could make the following changes:

Opt-Out Enrollment. Instead of allowing eligible tax filers to opt in to the AEITC, make it automatic so that filers who successfully claim the EITC every year receive payment year-round. Of course tax filers should have ready access to opt out at any time so they increase their tax-time refund.

Changing the default is a proven strategy for vastly improving enrollment rates. (Organ donation for European countries with opt-out policies maintain nearly universal participation rates, a stark contrast to countries with requirements to opt in.) The Obama administration is already considering an opt-out approach for low-income workers' retirement savings. A similar approach should be taken for the AEITC.

Seize the Opportunity. As the federal, state and local governments weigh strategies to help working-poor families cope with the recession, they will probably look to expansions of tax credits, including the EITC. This creates an excellent opportunity to expand the EITC automatically because, with an increase, working poor families would see more money in their paychecks and still maintain their tax-time refund at current levels. Effective April 1, workers will see about an extra $65 a month in their paychecks, a result of a payroll tax cut in Obama's economic recovery package. State and local governments could follow that lead by placing expansions to local EITCs directly into paychecks.

Marketing and Education. Community groups and advocates know how powerful a wide-scale marketing and educational campaign can be. In the last few years, many more working-poor New Yorkers have claimed the EITC and taken advantage of free tax preparation services because of highly coordinated public and private efforts. With the weight of government and philanthropic communities behind a similar AEITC effort, we could see similar accomplishments.

The EITC is a powerful elixir for working-poor New Yorkers who are struggling to make ends meet. The AEITC can ameliorate the "feast or famine" conditions working poor families face during the tax season by improving their financial security all year round.