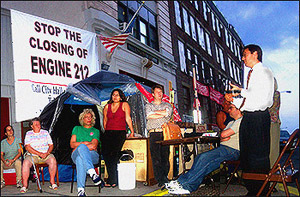 A first-term mayor, facing a budget crunch, shuts a firehouse, assuring neighboring residents that their community will remain safe. But, within days of the closing, a blaze sweeps through a home near the shuttered company. Two men die.

Two years later, the closing becomes a key issue in the mayoral campaign with the challenger assailing the mayor's decision. The challenger wins and soon after reopens the firehouse.

Mayor Michael Bloomberg, or at least his aides, must surely know this story. Yet in June of this year, Mayor Bloomberg shut down six engine companies - four in Brooklyn and one each in Manhattan and Queens (see articles on each one on our Community Gazettes.) He had promised to do so in his proposed budget, and he stuck to the decision even as he and the City Council agreed to restore many other slashed programs, such as funding to cultural institutions and senior citizen programs.

Last week, the fire department announced that the average response times - the time it takes for the first fire truck to arrive at the scene - have increased in five of the six communities where the fire companies were closed last May.

The news produced an intense reaction, as there was in May - as there has been ever since the city started closing firehouses in the 1970's The arguments against the closings have been loud and well publicized. Shutting a fire station, activists have argued, puts lives at risk and threatens a cherished community institution. Further, some say, it is a "slap in the face" to the 343 firefighters who died at the World Trade Center on September 11, 2001.

On the day in May when the six companies were ordered to cease responding to radio calls, actor Steve Buscemi and hundreds of other protesters demonstrated in front of Engine Company 204 in Cobble Hill, Brooklyn (see story). That same morning at Engine Company 212 in Williamsburg, Brooklyn, Paul Veneski chained himself to the fire truck - as his father had done 30 years earlier to save the exact same firehouse. (see story). In East Harlem, an angry group of people stood outside Engine Company 36 holding banners that read, "They go, We die." (see story).

But supporters of the closings say that, despite all the local protests, the firehouses are not needed. The average city firehouse was built at least 75 years ago, when many neighborhoods had more people; when buildings burned more often; and when fire-fighting equipment was nowhere near as effective. Refusing to change an outmoded system, some argue, is an exercise in nostalgia that a financially strapped city simply cannot afford.

Whatever the validity of such arguments, they lack the emotional appeal of the entreaties of the anti-closing forces, leaving many people, even Bloomberg's supporters, wondering why he would risk his political future to save several million dollars in a $44 billion budget.

Are firehouses today's equivalent of the five-cent transit fare, something city officials and residents fought to preserve for decades, even though it bankrupted a basic city service? Or is the shutting down of the firehouses more analogous to the demolition of the original Pennsylvania Station in the 1960s, when the government destroyed a beloved building without much thought or reason?

WHY THEY SHOULD BE CLOSED

The New York City Fire Department today has 340 fire companies, staffed by more than 11,000 uniformed officers and firefighters. To members of the Bloomberg administration, that is simply more than is necessary.

Deputy Mayor Marc Shaw said this bluntly at a conference in December. The department was particularly "ripe for finding productivity savings... Firefighters," he said, "only fight fires five percent of the time;they're sitting around doing nothing the other 95 percent of the time."

The comment provoked outrage and made the news. But it helps explain why the administration proposed that a few of the firehouses be closed, and why a budget watchdog group like the Citizens Budget Commission approved.

"It was a great decision," says Douglas Offerman, senior research associate with the budget commission. "They should have done it a long time ago."

In the years since many firehouses were built, fire safety has improved dramatically, with the installation of such measures as metal stairs and sprinkler systems. The city now is far safer than it was even 30 years ago, a tribute, Offerman says, to "good fire fighting and a tribute to good building regulations."

After peaking at more than 300 civilian fire fatalities in the early 1970s, such deaths dropped to around 100 in the late 1990s. Between 1980 and 1990, a Citizens Budget Commission report found, the number of structural fires (fires in buildings) dropped by 13 percent.

Mayor Bloomberg's supporters would argue that he too has been trying to adjust the fire department to present-day reality -- but they also concede he was less than politically astute in making his case.

If much of the fire department is outmoded, wrote Newsday columnist Joseph Dolman, "why not do a total citywide remake?...A mayor might actually build a constituency for this idea."

Instead, the administration relied on a technical argument about response time. A fire department analysis predicted that, after the companies closed, response times in all of the affected communities except one -- the area served by Engine Company 261 -- would remain below the city average of four minutes and 46 seconds. In determining which fire houses to close, the department also reportedly considered how long it would take for a second engine company to reach a fire in the affected area as well as the company's total number of runs.

Last week, the fire department released statistics that showed that response times in June and July did increase in five of the six neighborhoods where fire companies were closed, but emphasized that the increase was minimal. In all but two communities, officials said, the response times were below the citywide average of 4 minutes 50 seconds

"The changes we have seen during the past two months are, for the most part, below our estimated increases, or in line with what we expected," said Fire Police Commissioner Nicholas Scoppetta.

WHY THEY SHOULD BE REOPENED

Those who want the firehouse reopened say that the city's response time statistics are not reassuring and in fact they are misleading. They reflect only the time it takes the first engine company to get to a scene, while the department typically requires at least two engine companies and one ladder company at the scene of a blazing fire.

"They're still a long way from putting out the fire," said Stephen Cassidy, president of the Uniformed Firefighters Union.

In the communities affected, the debate has done little to counter the fear of causing fatalities and the sorrow at losing community heroes.

Closing a fire station is "like Russian roulette," says Tom Butler, spokesman for the firefighters' union, the United Firefighters Association (http://www.ufalocal94.org). "You don't want to be the one instance where a life is lost. But, inevitably, these things happen."

The closing would not even be cost effective, the union said. The six closings are expected to save only about $8 million, since all the affected firefighters kept their jobs; they were simply transferred to other companies. In a $44 billion budget, the union said, that's "like a nickel found in your couch."

They disputed the arguments about response time. A study by the International Association of Fire Fighters said that the closings could increase response times by 30 seconds and by a minute if a second emergency occurred in the area simultaneously.

Some of the critics noted that response time only measures the time for the first fire truck to reach the scene and does not reflect how much time it takes for all the vehicles actually needed to put out the blaze to reach the emergency.

The numbers, they say, simply do not tell the whole story. "All the firehouses are connected," says Debora Jackson of nofirecuts.com, which tracks the firehouse closings. "Envision a balloon; every time you push on one area the other side gets stretched out. That's how the fire department works ...Fewer firehouses mean longer response times."

But to those who feel most passionate about the firehouses, the arguments about response time, staffing levels and demographics ignore the popular appeal of the firefighters. New Yorkers recount not only how they put out flames but also how they come when someone falls sick; how they befriended newly-arrived immigrants near one of the closed firehouses, in Sunset Park, going so far as to fix the plumbing in their homes (see story); how they calm children by rescuing toys stuck in trees.

Throughout the city, residents "have some sort of friendship or relation with the men in the firehouse that they probably don't have with the police," according to Terry Golway, the author of a history of the fire department, "So Others Might Live."

Closing firehouses has been a nearly bizarre pendulum swing between savings and safety, fiscal prudence and political reality, ever since Mayor Abe Beame, facing a frightening fiscal crisis, was the first to close them in the mid-1970's. Thirty-two were shut down in all; Beame served one term in office. His successor, Ed Koch, reopened a Brooklyn firehouse that Beame had closed. But then, citing a decline in fires, Koch closed some firehouses himself. Dinkins reversed Koch's closing of a South Bronx company, then saw his own closing of the Richmond Hill firehouse overturned by Giuliani.

So far, Mayor Bloomberg cannot be accused of such vacillation. As budget discussions continued throughout this winter and spring, the mayor held firm to his closing plan. He rejected proposals that private corporations and individuals contribute funds to keep the stations open.

In February, the mayor and Council Speaker Gifford Miller announced the formation of a seven-member panel to review the closings. The commission voted to approve the closings, with the five members appointed by the mayor and fire department voting yes and the two named by Miller voting no. Neither the mayor nor the commission detailed the findings.

Unwilling to accept what seemed to be inevitable, some opponents took to the streets, and others to the courts. A group of politicians filed suit charging that the city did not conduct a formal environmental review and did not follow required city procedures such as notifying affected community boards. State Supreme Court Justice James Starkey largely rejected the complaint, although he did rule that the city should have notified the Roosevelt Island Community Board of the closing of Engine Company 261 in Long Island City, which serves the island. Starkey did not, however, demand that 261 remain open, and it has in fact closed (see story).

At the same time the court was hearing arguments, the mayor and City Council were hammering out a budget deal. While the accord restored many programs, the final budget did not call for keeping the companies open.

"Not everyone gets everything they want but that's democracy," said Jordan Barowitz, a spokesman for the mayor.

But others say the mayor's staff was adamant about keeping the six companies closed. Councilmember Bill deBlasio, an opponent of the closings, said the mayor had indicated that, even if the money were put back in the budget, he might not spend it.

The firehouses have closed, but local protests continue, with plans to appeal the court ruling and institute legal action. If Mayor Bloomberg has recently started sounding optimistic about the city's financial recovery, the protesters are sounding optimistic too -- the improved financial picture is yet another reason, they say, why their firehouses should be saved.