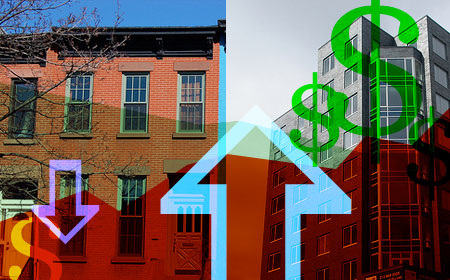 In the midst of the New York's budget woes, one bright note has been the steady revenue flowing from the city's biggest tax, its real property tax. According to the Independent Budget Office's March Analysis of the Mayor's Preliminary Budget for 2010, city property tax revenue will increase by 10 percent next year and an average of 4.1 percent annually over the next three years, 2011 to 2013. This includes the 7 percent increase in the tax rate, which became effective Jan. 1, 2009.

In the current fiscal year, property taxes are projected to be $14.4 billion, or about 41 percent of all city taxes. And while the IBO projects personal income taxes will fall next year by nearly 22 percent and business income taxes by 23 percent, property taxes will rise to $15.8 billion, making them account for more than 47 percent of all city tax revenues in 2010.

What explains such an increase at the same time both residential and commercial properties are so obviously declining in value?

While answering that question, the IBO report also discusses several continuing problems with the convoluted, often bizarre structure of the city's property tax system -- a system whose inequities and opaqueness the Bloomberg administration and the City Council have failed to address.

The IBO notes that inequities in tax burdens still exist among house and apartment owners. It notes that attempts to equalize tax burdens have created new inequities and that a promised city report on structural reform has been repeatedly postponed.

An increase in property tax revenues as the real estate market tumbles certainly presents an anomaly. The IBO projects that the total market value of all taxable city property for 2010 will decline by 2.2 percent from 2009, falling to $792.3 billion. From 2005 to 2008, total market value growth averaged 13.5 percent annually. Yet at the same time, the IBO projects that total property assessments in the city will increase by 5.5 percent to $140.3 million in 2010.

In most places, property tax assessments -- the value a tax assessor applies to a property -- are the same as market values. Not in New York City, where nearly $800 billion in market value translates into only $140 billion of taxable assessments. Because city and state legislators have wanted to protect certain classes of property owner -- particularly house owners -- city tax assessors have for over 25 years assessed different kinds of properties at different fractions of market value.

For instance, assessments of one, two and three-family houses are currently supposed to be 6 percent of market value (called an "assessment ratio"). In practice, however, given the complexities of the system, assessment ratios are well below 6 percent. In fact, the IBO suggests the median assessment ratio for houses in 2010 will actually be 4.4 percent. So a typical $400,000 house would be assessed at $17,600.

After the assessment is set, actual taxes for a property are then determined by applying a tax rate, say 15 percent, to the assessed value. In the case of the house worth $400,000 in the marketplace but with an assessed value of $17,600, the actual taxes would be $2,640.

In a 2006 report, Twenty-Five Years After S7000A: How Property Tax Burdens Have Shifted in New York City, the budget office pointed out the relatively high market values given coops and condos.

In New York City, increased market values are phased in over five years, rather than recorded immediately. This helps allow city property taxes to continue to rise in a down market. This phase-in (technically called a "pipeline") means that previous increases in value are still being reflected in the tax take even as values fall.

More specifically, the IBO points out that the 632,000 one, two and three-family houses in the city lost 5.0 percent in market value over the past year, but in 2010 will increase in assessment value by 4.3 percent, because the rising values of recent years have yet to be fully phased in. There is one limit on this though: Homeowner assessments are capped as well as phased in, which means some of the increased value may never be captured.

Commercial properties will also see the effects of the pipeline. From 2011 through 2013, their assessments will continue to rise at an annual average of 5.5 percent. At the same time their total market values will grow only by 0.4 percent in 2011 and decline the next two years by about 1 percent a year.

Political decisions have also affected property tax revenues. For one, effective Jan. 1, 2009, the mayor and the City Council canceled the 7 percent reduction in property taxes that had been enacted for fiscal year 2008 and continued through the first half of fiscal 2009. That move has increased revenues by $591 million in 2009 and will increase revenues by $1.3 billion in 2010 and by $1.5 billion in 2013.

For next year, the city also canceled the $400 rebate for house, coop and condo owners. Mayor Michael Bloomberg said in his November 2008 budget proposal that he wanted to cancel the rebate in this fiscal year, but the council rejected that idea and the rebates - totaling $256 million -- went out in December 2008. But the rebates are no longer in the city's current four-year plan, saving $256 million annually.

The IBO report also gives an update to the coop and condo abatement program, a 17.5 percent reduction in property taxes for most owners and 25 percent for a relatively few with very low assessments. This was established in 1997 as an attempt to reduce the disparities between the higher taxes paid by coop/condo owners vs. house owners.

The program has been extended several times, most recently in 2008 for four more years. According to the IBO, though, it does not address disparities among coop/condo owners and provides too little tax relief in some cases and too much in others. Further, the legislation mandated a city report that would address the inequities in the property tax on a more permanent basis, but that report has never been written, and the recent extension of the abatement program pushed the report's due date back to February 2011.

In its 2006 report, the IBO concluded that existing inequities in the system date back to a 1981 policy providing tax advantages to owners of private houses owners. Since then, the inequities have only increased. For instance, owners of one, two and three-family houses saw their tax burdens -- the amount of actual taxes paid as a percentage of full market value -- drop by 65 percent from 1984 to 2007, while the tax bill for coop and condo owners dropped also, by only by 29 percent and 28 percent, respectively.

On the other hand, tax burdens for commercial property increased by nearly 10 percent between 1985 and 1997. And on the rental side (about two thirds of New Yorkers are renters) elevator apartment buildings, where a majority of renters live, saw a 41 percent increase in tax burden during those same years.

The city's own January 2009 report on tentative property market values and assessments for 2010 highlights the ongoing disparities in tax treatment between house owners and other property owners. On average, house owners currently pay an effective tax rate of 0.53 percent. They pay an average of $3,230 in property taxes on average market values of $604,197.

The city's statistics on coops and condos, however, highlight the bizarre nature of treating these homes for assessment purposes as if they were rental housing. According to the city's figures, coops have a very high effective tax rate -- 4.23 percent for coops and 4.02 percent for condos.

These citywide and Manhattan values have no relationship to the real world -- even during a recession. To take only one example, an April 2, 2009 report in the New York Times noted that even with a 20.9 percent decline from a year ago, existing coops and condos in Manhattan were selling at an average of $732,000 per apartment, with new ones going for a much higher price, in the first quarter of calendar 2009.

As this disconnect between assessments and market values shows, current procedures in the property tax system are far too complicated, hopelessly opaque and all too often inequitable. As property taxes, already by far the most important city tax source, account for a greater share of city tax revenues it would be in the public interest for those in charge - the mayor and the City Council - to pursue transparency and equity in the system. Unfortunately, no one seems interested.