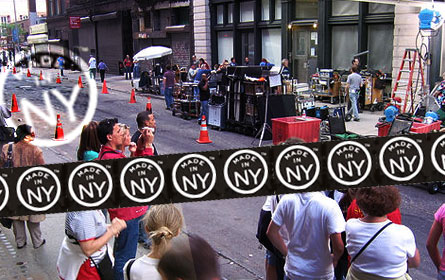 Photo (cc) MacRonin47
The Law & Order series has been a staple in the "Made in NY" campaign of
the Mayor's Office of Film, Theatre & Broadcasting.

Once a source of excitement, long trailers, camera crews, spotlights and even movie stars have become routine sights on the streets of New York City. Just as filming has become a fixture in the city's streetscape over the past five years, the TV and film industry has morphed into a thriving sector of New York State's economy. With the increased tax incentives provided by New York Empire Film Credit program, TV and film productions have flocked to New York, generating thousands of jobs for residents and over a billion dollars in tax revenue for the state.

Back in March, though, the future of the tax credit program appeared in doubt. The film industry became alarmed, prompting actors, producers, and union and guild members to rally for continued tax incentives. On March 31, Gov. David Paterson, Senate Majority Leader Malcolm Smith and Assembly Speaker Sheldon Silver responded and announced that they would allot $350 million for the tax credit program.

The film industry, though, fears it could still face difficult times ahead. Executives and employees worry the state has offered a "Band-Aid" solution and that enticing tax incentives in states such as Massachusetts, Rhode Island and California will lure more and more film productions from New York State.

Will there be a tax credit program for fiscal year 2011 and beyond? Without a concrete answer, many people in the film and TV industry feel uneasy about pursuing new projects in New York and will likely scout out locations in other states for future productions.

Hollywood on the Hudson

To nurture the TV and film industry, the state created the Empire State Film Production credit program in 2004. It offered a 10 percent tax credit to film and television productions, while New York City gave an additional 5 percent credit for all qualifying costs of productions filmed within the city. The credit is granted only when the project is completed one to two years later. Therefore, the state makes money from the moment a project begins filming.

With this credit, New York has attracted a record number of film and TV projects. These projects have had a substantial effect on the state's economy. The film industry, according to a recent Ernst & Young study, put over 19,000 New Yorkers to work in 2007 and earned the state a $1.90 for every dollar spent.

As the state allocated more money to the tax credit program over the years, a large number of film and TV productions flocked to New York, bringing significant revenue into the state. According to the 2008 Report on the Empire State Film Production Tax Credit prepared by the governor's Office for Motion Picture & TV Development and the Office of Tax Policy Analysis, the tax incentive program has "created more than $3.4 billion in economic activity and over 13,000 direct jobs" since its inception in August 2004.

Getting in on the Action

New York is not, however, the only state offering attractive incentives for TV and film productions. Over time, neighboring states, including Massachusetts, Rhode Island and Pennsylvania, implemented competitive tax incentive programs and began to build more facilities for filming, such as sound stages and production houses. As a result, New York State suffered a drop in feature film applications in 2007, costing the state hundreds of millions of dollars.

In the spring of 2008, Paterson's office responded by allocating $460 million to the program and tripling the tax credit from 10 percent to 30 percent. This swift action paid off, and Ernst & Young reported that, by the end of 2008, the spending and production costs for film projects resulted in over $1.8 billion being spent in the state compared to the $940 million the year before.

The program may have proved too popular for its own good. It drew so many new film and television productions to the state that the funds, intended to last until 2013, were quickly drained.

To make matters worse, in February, it appeared that legislators in Albany might not extend the Empire Film Credit program. Officials never fully explained their reasoning, but some members of the film industry speculate that, with the state's deficit, lawmakers did not see the program as a necessity or entirely gauge the success and impact of the film industry on the state economy.

For several months, the film community petitioned and lobbied for the tax incentives to remain in place, and finally, the governor's office budgeted $350 million for the program, keeping the tax credit at 30 percent to 35 percent for all qualifying costs. The film industry acknowledges this is a step in the right direction and agrees this new budget will draw more film productions to New York next year.

"Obviously, the legislature and the governor want to continue the program and recognize the high level of jobs it creates for people in New York," said Vans Stevenson, senior vice president of state legislative affairs for the Motion Picture Association of America. "It is a matter of looking at whether they want to be part of a sustaining industry -- there is a lot of industry that is in danger of leaving if the program isn't extended."

With the state in need of jobs and revenue and with neighboring states having enacted their own tax incentives, many filmmakers and union members in New York feel the state needs to make the program permanent or at least extend it for several years. Government officials in Albany, though, are only addressing the current situation.

"It is distressing that we have already witnessed a number of productions leave New York for other locales," City Comptroller William Thompson Jr. said in a statement. "I urge state leaders to take this a step further and extend this program beyond one year. Doing so will help ensure the retention and creation of jobs in a time of great financial stress, and display a long-term commitment to an industry vital to our economy."

"If there's no tax incentives, there will be no productions in New York. And if there's no year to year program, this will not attract any film or TV productions to New York," Hal Rosenbluth, president of Kaufman/Astoria Studios wrote in an email. "New York will be the 'hero shot' state that it once was -- where productions came for one day got their shot and left."

Out on the 'Fringe'

The absence of a permanent tax credit program poses a particular danger to continued television production in New York State. Since TV series are ongoing, they usually require a minimum of a three-year commitment to a location.

A one-year program "doesn't give a level of predictability," for television producers, Stevenson said. "Generally, people aren't going to want to make commitments to come to New York because the program isn't multi-year. There is more certainty with other states like Massachusetts, Rhode Island, Canada, which have permanent programs."

New York recently lost Fox's program, Fringe, to Vancouver as a direct consequence of the uncertainty of the tax credit program back in February. With a number of TV shows being filmed at the present time in New York City such as 30 Rock, Ugly Betty and Gossip Girl, the studios and networks are urging the state to act quickly in order to sustain the current programs and continue to attract new shows.

Even with the $350 million allocation, the tax credit program might very well run out of money before the fiscal year's end in 2010. According to the Empire State Development Corp., some 20 productions already are on the waiting list for the program. At this rate, lawmakers in Albany might need to reevaluate the budget sooner than expected.

Further complicating the picture is a proposal, contained in the executive budget announced by Mayor Michael Bloomberg on Friday, that would set a $5,000 a day fee for filming on city property, such as court buildings or parks. There currently is no charge.

As New York City's decimated financial sector continues to bleed jobs, film advocates see their industry as a better candidate for growth and job creation than once booming Wall Street and real estate. With that in mind, Rosenbluth sees the city as having a natural affinity for filmmakers, although he cautions the city and state cannot take that for granted.

"Our tax credit is worth far less than many other states," he said. "However, we believe that we don't have to match, we just need to keep New York competitive, and the value added of New York comes into play," bringing the city exposure, jobs and tax revenues.

Nicole Gates Anderson is a freelance writer based in Brooklyn.