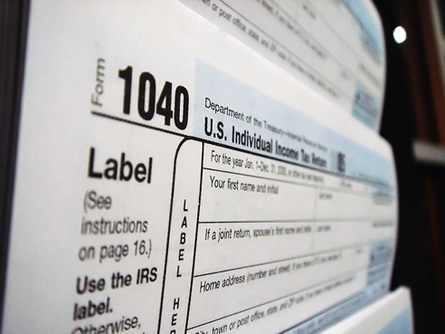 The public library on East Broadway and Catherine Street doesn't open until noon on Thursdays, so the City Council had the run of the place last week when it showed up on Thursday morning to present its official response to Mayor Michael Bloomberg's preliminary budget.

Libraries are almost always a major bargaining chip in the annual budget negotiations -- and this spring will be no exception. When times are tough, libraries are usually asked to absorb cuts. Now, with Bloomberg estimating a $4 billion budget surplus, the council wants to increase funding for libraries by tens of millions of dollars.

The big-ticket item in the budget was Council Speaker Christine Quinn's tax credit for renters. [To read more about the tax credit craze, click here to read Many Ways to Spell Tax Relief.] Overall, the council wants to add $300 million in tax cuts and new initiatives, while also restoring $266 million in existing programs left out of the mayor's budget.

But the council is also trying to shed its reputation as the city's spendthrifts. Quinn accompanied the new spending and tax cut proposals with plans to cut wasteful spending in government agencies, and even to end some programs that the council itself started. Her presentation mirrored the mayor's, as she warned that the good times will not last forever, and that city officials must plan for leaner years ahead.

Overall, the council's budget is $61 million larger than the mayor's.

This is the council's first offer, and Quinn said that she doesn't expect conflict with the mayor. That will be seen in the coming weeks, when Bloomberg will release his executive budget and the two sides begin to wrangle over the details. If past years are any indication, this process will end in the wee hours of an evening in late June.

THE SIZE OF THE BUDGET

The council and the mayor disagree on how much money the city has to spend.

The council predicts that the city will receive over $600 million more in taxes than the mayor has accounted for. Such differences are common -- Mayor Rudolph Giuliani has boasted that he intentionally underestimated tax revenue to keep spending down. Quinn does not Bloomberg of such chicanery, but she does say that the council "almost always projects more than [the mayor], and we're almost always right."

In recent years, at least, this has been the case, according to the Independent Budget Office.

HOW THE COUNCIL WANTS TO SPEND MONEY

The council budget response includes $258 million in new tax cuts and $45 million in new spending initiatives not included in the mayor's preliminary budget. It also proposes spending more money to prepay expenses for the next year.

Housing Initiatives: The main initiative in the council's budget response is a $300 tax credit for renters. Two-thirds of the city's residents live in rental housing, and more than half of them pay at least 30 percent of their income on rent. Rents rose when property taxes were raised after 9/11. Renters, however, have not benefited from the tax rebates that homeowners have received over the last several years.

Quinn's rebate would be given to families that rent and make less than $75,000, and individuals who make less than $43,000. It would cost the city $261 million. She describes the plan as an extension of the mayor's tax rebate for property owners, which the council's budget response officially endorses.

The mayor has withheld judgment on the credit, saying it will be discussed in negotiations. Some critics argue that a renters credit will further distort the city's housing market. Others question whether $300 will make a real difference in renters' lives.

"It's a tease," said Councilmember John Liu. "And it's something I support."

The council is proposing several other housing initiatives.

It wants to make more people eligible for a program that helps first time homeowners with down payment and closing costs, known as Renters to Owners Opportunity Fund, or ROOF. The council wants to raise the program's income cap from $56,000 to $92,000, which would cost City Hall about $5 million. In an attempt to avoid foreclosures, the council wants to expand the city's efforts to educate homebuyers about mortgage costs and other expenses.

The council would add $25 million per year to the capital budget to subsidize the renovation of "distressed" affordable housing owned by the federal Department of Housing and Urban Development. This housing would then be transferred to private owners who would guarantee that the apartments would remain affordable.

Full Day Pre-Kindergarten: The council wants to spend $10 million in fiscal 2008, increasing to $13 million by fiscal 2011, to fund full-day pre-kindergarten classes. This would provide 2,100 spots for full day classes in the coming fiscal year.

Increased Hours for Libraries: The council is calling for all public libraries to be open for six full days each week. The council plan would reach this goal within three years, at a cost of $47 million over that time.

HOW THE COUNCIL WANTS TO SAVE MONEY

Agency Cuts: The council plans to save almost $400 million by readjusting spending for agencies that have overestimated their costs. In addition, it is proposing cutting another $22 million from the Department of Education, the Human Resources Administration, and the Department of Housing Preservation.

About 80 percent of the council's agency cuts would come from the Department of Education, whose budget would shrink by $17.9 million. The savings would come mainly by removing staff from the Panel for Educational Policy, an advisory board that is supposed to review policy changes. The panel is toothless -- when several members opposed the mayor's plan to end social promotion several years ago he simply forced them out. Yet the council claims that it has grown in size in recent years, and now has funding for 14 full-time staff members. It wants to redirect that money to classroom uses. The mayor says that these employees do not exist.

The council wants to cut the Human Resources Administration's budget to combat welfare fraud, arguing it has less work to do with the welfare caseload at it lowest point in 40 years. It would also end the Narcotics Control Unit at the department of Housing Preservation and Development, arguing that the police department can now handle this responsibility.

Ending Unneeded Council Programs: The council is also willing to cut some programs it has championed in the past. It has identified $6.2 million in "potential initiatives that may not need renewal." These range from $2.2 million used to combat hepatitis B among Asian Americans, to a $900,000 tennis league, to $50,000 used for a program to count youth runaways.

Within the context of a $57 billion budget, $6.2 million is hardly significant. But Speaker Quinn says that the council's eventual goal is an annual review of all council programs to determine whether they are effective. She cautioned that such thoroughness was still on the horizon.

With the exception of the education panel, the mayor responded positively to Quinn's proposals.

"One of the things that I was pleased to see in her budget was that she did have some money saving ideas," he said. "Whether those are the ones will be appropriate when everybody gets together and looks at them I don't know."

Since she became speaker, Quinn has made reform of the budget process a priority. Last week, the council claimed a victory in the effort to eliminate the process by which the mayor takes items out of the budget knowing that they will be restored, known as the " budget dance."

In his preliminary budget, the mayor included permanent funding -- an action that budget watchers refer to as "baselining" -- for various arts, parks, and cultural programs that have been used regularly as bargaining chips in the budget dance. But the council still identified $266 million in programs that they want restored and baselined in this year's budget.

In another reform taking effect this year, the city's budget will include the names of the council members who requested member items, which are grants for local projects backed by individual legislators or groups of legislators. On all levels of government, such grants are derided as pork barrel funding, and there is a move to hold lawmakers accountable for pushing for this funding.

The theory behind increased disclosure is that it will lead to more responsible spending by forcing lawmakers to answer for their decisions. Dick Dadey of Citizens Union (whose sister organization, the Citizens Union Foundation, publishes Gotham Gazette) said that such changes are already being seen in the moves by the council to stop funding its own unnecessary projects.

"They're rightfully preparing to say that not everything we've funded behind closed doors should be funded with the doors open," he said.