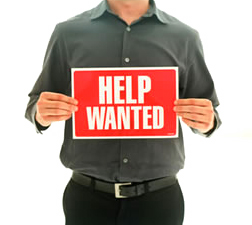 Mayor Michael Bloomberg and others are touting the city's low unemployment rate, which dropped to 4.3 percent in March, the latest data at this writing. When he released his Executive Budget on April 26, the mayor stated, “The unemployment rate is at historic lows in the city.” While it’s not clear if the March unemployment rate is indeed the “lowest level ever,” as the mayor’s budget press release claimed, it is the lowest in the Bureau of Labor Statistics series that began in January 1976.

In the 30-year span of recorded unemployment rates, the highest annual levels were 11.1 percent reached in 1976 and 1992. 2006 marked the first time that average rate for the year dropped below five percent (it was 4.9 percent).

For the past several decades, the unemployment rate has been one of the key indicators used to gauge the condition of the economy, particularly the state of the job market and whether it is favorable or unfavorable to workers and job seekers. But the number alone does not tell the entire story. Three main factors enter into the determination of the unemployment rate (see box), and several issues â€“ including whether people are looking for work, racial and age differences and the length of time people remain unemployed â€“ need to be considered to really make sense of what the unemployment rate is telling us.

The unemployment, considers simply whether or not a person has a job, not whether the job is a good one. (For more on changes in the city’s economy, including the job market, see related article.

UNEMPLOYMENT STORY IN A NUTSHELL

The quick takeaway on what today's relatively low New York City unemployment rate means is this:

The unemployment rate only measures people who either have jobs or are actively seeking work. Statistically, that means the unemployment rate for an area could decline because people leave the labor force. This could happen during an economic downturn if people decided their economic prospects were so grim that looking for work would be a waste of time. A variation of this has occurred in some upstate New York areas hard hit by the steep decline in manufacturing, long their economic backbone. In Buffalo, for example, the unemployment rate dropped from 9.5 percent in March 1999 to 5.4 percent this March. However, the number of people with jobs fell by 12 percent and the number of people in the Buffalo labor force declined by almost 16 percent over this period. Sustained, steep job decline has led people to leave the area for communities with brighter job prospects.

In New York City, the labor force has been growing and jobs are much more plentiful than upstate. In fact, at 3.8 million, the Big Apple's labor force has never been larger. While the city's population of 8.2 million is only slightly bigger than its previous peak of 7.9 million in 1970, many more women are in the workforce today, making the overall size of the city's labor force much greater. Women now constitute nearly 47 percent of the city’s workforce.

The main reason for the convergence is the steady upward climb in the number of health, education and social service jobs in New York City -- jobs typically held by city residents. Commuters tend to be highly concentrated in higher-paying financial, information and professional service jobs, which tend to be very cyclical, that is, there are more of them when the economy expands, fewer when it declines. Since the previous peak point for New York City payroll jobs in December 2000, these commuter-intensive jobs have registered a net decline of about 53,000 jobs. The number of jobs in health, education and social service has grown by 81,000 since 2000, after already having grown steadily throughout the 1990s.

Meanwhile, the number of self-employed New Yorkers has increased by about 50,000 since 2000, further boosting the resident employment numbers. However, some of the reported increase in “self-employment” may actually represent workers who are correctly or incorrectly considered “independent contractors.”

MORE WORKERS BUT EVEN MORE JOBS

The number of New Yorkers officially considered unemployed dropped to 175,000 in the early part of 2007. This is the lowest level since 1988 (when the labor force had a half million fewer people than it does today) and about 10 percent below the level reached at the previous peak of the business cycle. During the economic downturn early in this decade, New York City unemployment rose to 320,000 -- nearly two-thirds higher than it was before the downturn.

In the three and a half years since the economy’s low point in August 2003, the 214,000 resident employment gain has greatly exceeded the 68,000 increase in the labor force. The result is that 146,000 fewer New Yorkers are unemployed, dropping the unemployment rate by four percentage points to 4.3 percent.

The drop in unemployment since 2000 has been most pronounced among Hispanics with a decline from 8.1 percent. In 2000, the female unemployment rate was higher than for males in the city. This pattern flipped by 2006 as unemployment fell more for women than for men. 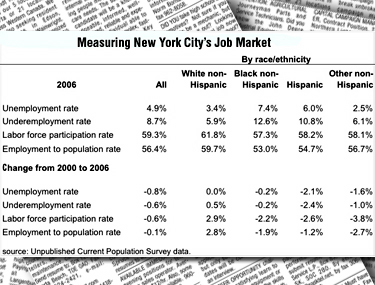 ALTERNATIVE WAYS TO LOOK AT THE JOB MARKET

Beyond the basics of labor force, employment, and unemployment, some other more technical measures reflect pretty basic notions about how working age adults (those aged 16 to 64) relate to the job market.

As noted above, working age adults are considered part of the labor force if they are either employed or looking for work. There may be various reasons why someone is not looking for work and thus not counted as part of the labor force. Beyond giving up on finding a job, these include family responsibilities (caring for a child, parent or other family member), attending school, disability or retirement.

A related concept is the employment to population ratio, also known as E-POP. As the name suggests, this allows one to directly consider employment in relation to the entire working age population, including the employed, the unemployed and those who are not in the labor force. Many analysts consider the E-POP to be a more useful gauge of job market conditions than the unemployment rate.

For many years, the city’s labor force participation rate has trailed that of the nation. In looking at the reasons for this, family responsibilities stands out, followed by higher school attendance among adults and to a lesser extent, higher rates of disability and discouragement.

While unemployment in the city has declined during the economic recovery and is slightly below where it was in 2000, a much greater proportion of those who are without jobs have been unemployed for a long period of time. Overall, the share of those unemployed who have been out of work for more than six months increased from 24 percent to 30 percent between 2000 and 2006. Long-term unemployment is particularly severe for males (nearly 35 percent of those unemployed are long-term unemployed), black non-Hispanics (34 percent), other non-Hispanics (36 percent), workers age 45-64 (39 percent) and those with less than a high school education (43 percent).

The unemployment insurance system provides a safety net for unemployed workers. New York was one of the pioneers among states when it instituted an unemployment insurance program in 1931 under then-Governor Franklin D. Roosevelt. It was intended to help families of workers who had lost their job to sustain themselves and to serve as an “automatic stabilizer” by injecting money into the economy during periods when layoffs rise and wage income falters. For example, during the aftermath of 9/11 and the downturn following it, unemployment insurance was the main source of compensation for workers dislocated by the World Trade Center attacks, far greater than the assistance to workers provided by post-9/11 federal funding.

However, the state’s system has not kept pace with changes in the economy. As a result, a smaller proportion of unemployed workers receive benefits now than in the 1970s and 1980s. In 2005, only 41 percent of New York’s unemployed received the payments compared to an average of 53 percent in surrounding states. New York’s maximum weekly benefit is also far lower than in neighboring states. The National Employment Law Project monitors state unemployment insurance programs and has documented changes needed to gear New York’s program more closely to today’s economic challenges.