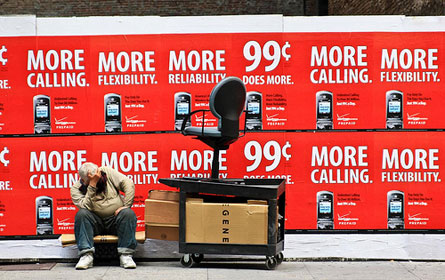 A few years ago, when my colleague, David Dyssegaard Kallick, and I assessed Mayor Rudolph Guiliani's economic record, we concluded:

"Mayor Giuliani often took credit for New York’s booming economy in the 1990s, but the trick in managing New York’s volatile economy during boom times isn't keeping real estate prices up. The difficult job is making sure the benefits are widespread, diversifying the city's economic base, and preparing for the eventual crash. On all three measures, over time Mayor Giuliani's legacy is looking worse and worse."

Boom and bust still characterize the local economy, and despite many ways in which Mayor Michael Bloomberg's tenure has been an improvement over Guiliani's record, his economic leadership similarly has fallen short in ensuring that the benefits of growth are more broadly shared. He has refused to advocate for better wages, missed a major opportunity to curtail the use of property tax breaks and hasn't re-oriented the investment of city economic development resources away from real estate toward human capital.

Fundamentally, the twists and turns of New York City's economy depend on the national economy. Mayors aren't responsible for everything that happens on the local economic front, good or bad. Rather, their economic leadership should be evaluated based on how they respond to the challenges thrown up by broader changes in the economy. Have they done things to counter the negative trends and help New Yorkers better adapt to economic change? Have they worked with leaders in Albany and Washington to shape economic policies in a way that benefits the average New Yorker?

Bloomberg has continued the progress made during Giuliani's two terms in the fight against crime, helping to improve the city's quality of life and keeping the city attractive to domestic and foreign migrants. And there is no doubt that Bloomberg's fiscal stewardship is vastly better than his predecessor's. While Giuliani repeatedly reduced taxes and made them less progressive, paving the way for a severe fiscal crisis in the early years of Bloomberg's first term, Bloomberg held back some of the surplus revenues during the boom years, anticipating a cyclical downturn that would lower tax receipts. However, facing a significant revenue shortfall earlier this year, Bloomberg raised the regressive sales tax. He also supported business tax changes that likely will cost the city tax revenues five or six years down the road.

First, a few indicators of how the local economy has changed.

The economy during the Bloomberg years was precarious one most New York workers and their families. The economic upswing, in New York City and nationally, was characterized by an unsustainable housing bubble, speculative financial frenzy, and excessive borrowing by households seeking to maintain living standards in the face of escalating housing prices and stagnant wages. Here in the city, the 2003-2008 "boom" created a local labor market with fewer well-paying jobs and more lower-paying ones, and stagnant wages and family incomes.

The Lure of the Deal

Despite these challenges and the mayor's hugely successful career as an innovative and entrepreneurial businessman, his management of New York City's economic fortunes has been pretty conventional. And given the mayor's background in the financial sector, it is a little puzzling that he seemed to be as caught as off guard as he was by the financial sector implosion, the forces that gave rise to it and the effects that were playing out in New York City as a result of the housing bubble. In fact, as recently as January 2007, the mayor released a city study that called for further financial deregulation.

The economic vision behind the re-zoning of the 60-acre Hudson Yards area -- particularly after the prospects for erecting a professional football stadium on the Far West Side of Manhattan faded -- was of skyscrapers filled with enormous trading floors for an endlessly expanding financial sector. When the subject of jobs for New Yorkers was raised, officials usually pointed to the retail, restaurant and service jobs that the development would generate. Most of these jobs pay very low wages, often at or only slightly above the poverty level.

Wages for many New York workers do not have to be as low as they are. The city has considerable influence it can wield to require developers to pay decent wages and benefits. It can rezone land, creating an enormous windfall for developers, and it provides generous tax breaks. Under Bloomberg, the city generally has refused to use that leverage to establish wage and benefit standards despite the fact that job standards are the norm in many cities and states, including Los Angeles and New Jersey. Even Houston requires recipients of city subsidies to provide 100 percent employer-paid health insurance.

City economic development officials argue that businesses will raise wages when it is good for them so there is no need to compel them to do so. This ignores the history of labor standards in this country and the evidence of what happens when the wage floor is raised. Employers adopt more efficient ways of utilizing workers, turnover and recruitment costs decline, and productivity increases. Moreover, federal government data indicate that the worker productivity (value added per worker) of most sectors in New York City is well above national averages. In the hospitality sector, the productivity of a New York worker is 75 percent greater than the national average, and in retail, the New York workforce is 39 percent more productive. New York businesses can afford to pay workers better.

The city's continuing refusal to establish wage standards for subsidized development deals is evident in the Kingsbridge Armory case currently before the City Council. The Bloomberg administration has agreed to heavily subsidize the project by selling the property to the developer well below market value and providing $14 million in city tax breaks. A coalition has been pressing for the project to require a living wage, local hiring and community amenities. The mayor has rejected the coalition’s agenda in favor of giving the developer a freer hand.

The challenge of low wages and the city’s increasing working, but poor, population was highlighted by the Mayor's Commission for Economic Opportunity (aka the "Poverty Commission") in its 2006 report to the mayor. The commission pointed out that "for too many families, work is no longer a ticket out of poverty."

One way to change that is to help workers train for more highly paying jobs. However, during the Bloomberg administration, the city has paid far less attention to improving the human capital of New York's workforce through skills training and career-related vocational education than to the steady stream of real estate deals and mega-projects. Since most companies rarely invest much in the skills of their workforce (partly out of concern that such "investments" can walk out the door), the city needs to make optimal use of the limited federal government workforce development funding and encourage more businesses and industries to develop career ladders that support and reward workers seeking to improve their skills.

While education is the key to success in the labor market, according to the latest 10-year occupational projections a disproportionate share of New York City's projected net job growth is expected to occur in jobs that require little formal education or skills training, and that are likely to pay wages insufficient to support a family. It is imperative for the city to do more to promote human capital investments, to increase skill requirements, and to foster the development and expansion of homegrown businesses that rely on more skilled workers. MIT labor economist Paul Osterman has argued that wage standards are an effective way to put pressure on businesses to make jobs more productive.

In 2006, the city’s Economic Development Corp. enlisted the assistance of outside economists to help evaluate the city's largest economic development tax break program, the Industrial and Commercial Incentive Program. In a surging real estate market, the cost of the program was rapidly increasing and recently reached an annual cost of $500 million. The evaluation concluded that a huge portion of program's breaks were unnecessary, since most companies probably would have made the investments without getting a tax break. The evaluation suggested that incentives could be curtailed entirely in midtown Manhattan and that retail projects should be sharply limited since retail investments typically follow market opportunities. Despite these findings, only relatively minor modifications were made to the tax subsidy program.

The real estate community argued that the tax incentives were necessary in midtown -- one of the most desirable and sought-after business locations in the world -- since the city had committed to providing generous commercial property tax breaks in the Hudson Yards district, west of midtown. Here was a case where City Hall's desire to engage in "creative," off-budget capital financing for one project had locked in decades of commercial property tax breaks. At the time, Sen, Charles Schumer merely stated the obvious when he remarked that massive public investment in the form of the number 7 subway line extension, parks and other amenities, should have been sufficient inducement to get developers to build along the Hudson River not far from Penn Station, the Javits Convention Center and the Theater District.

During the recent real estate boom, when demand for Manhattan office development was literally sky-high, the city had the opportunity to back away from granting costly commercial property tax breaks. It failed to do so.

Particularly in the wake of seismic financial market shifts, everyone wants to see the local economy move away from its over-reliance on Wall Street. For example, there is justifiably a lot of interest in exploiting opportunities posed by a transition to a "greener" economy. It's a triple play -- reduced consumption of fossil fuels, a cleaner environment and new jobs to boot. But along with adding new industries, we should be concerned that the jobs created in them are good jobs, offering decent pay, benefits, training and advancement, and that they employ city residents. We should also seek to promote real minority entrepreneurial involvement in new and emerging industries.

The mayor's PlaNYC 2030 underscored the environmental benefits of a greener economy. The various green jobs components of the federal stimulus program (e.g. residential weatherization and public building retrofits) will add tremendous resources at an opportune moment, provided the city has the strategic vision to build a local "green jobs" sector.

In this Great Recession, New York City’s unemployment rate has crossed into double digits and is likely to stay unacceptably high for several months, possibly years, to come. When discouraged workers and the under-employed are factored in, the city’s "real" unemployment rate is about 16 percent. For blacks and Hispanics, real unemployment is 20 to 25 percent. And New York has a lot of company -- 30 million Americans are either unemployed, under-employed or have dropped out of the labor market because jobs are so scarce.

For national economic policy, there is little recourse but an expansive job creation program. The mayor of New York City should be working closely with our elected officials in Washington to design a program that will help struggling small businesses, worried families, our distressed neighborhoods, and that will buttress the provision of critical public services.

James Parrott is deputy director and chief economist of the Fiscal Policy Institute.