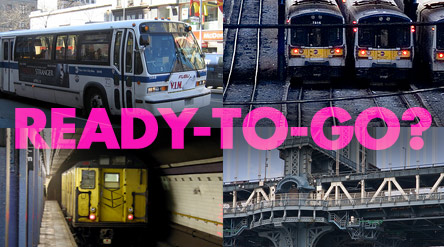 The doom and gloom minor-key melody that has been the city, state and federal government's economic song for the past few months has a contrapuntal drum beat beneath it: the steady call for infrastructure spending as an economic spur.

Since the financial crisis began, transportation advocates and trade groups representing the construction industry have called, frequently and loudly, for increased spending on transportation infrastructure. Nobel Prize laureate Paul Krugman joined fellow New York Times columnist David Brooks to suggest that investment in transportation infrastructure is both necessary and sensible given the state of the country's roads, bridges, transit systems and railways, as well as the dire need for jobs and domestic spending.

The economic turmoil has also created a huge financial shortfall for New York City's mass transit system, which relies heavily on dedicated tax revenues to fund its day-to-day operations. While a stimulus package could provide capital money for the city's subways and trains to expand and improve, current proposals would do little to remedy the billion dollar operational deficit facing the system.

On Sept. 26, the House of Representatives passed the Job Creation and Unemployment Relief Act of 2008, a $61 billion economic stimulus package with $30 billion set aside for transportation and infrastructure programs, including $12.8 billion for highways and bridges, $4.6 billion for transit and $500 million for Amtrak. The Senate has not yet taken action on the bill, but Rep. Jerrold Nadler of New York, who sits on the House Transportation and Infrastructure Committee, said that he expects to see a $60 billion to $100 billion stimulus program, with large infrastructure allocations, signed into law during the lame-duck session this fall.

The New York Times reported that President-elect Barack Obama is already working with congressional democrats on a larger stimulus package to be passed in January, including "more jobless benefits, food stamps, aid to financially strapped states and cities, and spending for infrastructure projects that keep people at work." "Most economists I've talked to are saying between $300 and $400 billion for the larger stimulus bill" to be passed after Obama and the new Congress takes office, Nadler said.

If and when either of these bills becomes law, how much money will eventually find its way to infrastructure improvements in New York State and New York City?

This, in large part, depends on the list of "ready-to-go" projects prepared by the state and city transportation departments and regional authorities like the MTA.

For transportation infrastructure spending to work as an economic stimulus, the federal government's money needs to be put to use as quickly as possible, according to Nadler. "The point of a stimulus package is to get money spent and have it circulate, so part of an intelligent package is picking projects that can get done now: Environmental review is done. Plans are done. Shovels can go in the ground. Bricks can be laid. Workers can get paid," he said.

Projects that meet these requirements are termed "ready-to-go" and are given preference in the stimulus bill that the House passed in late September. It reads: "Priority in the use of funds shall be given to projects that can award contracts based on bids within 120 days of enactment." Similar language will almost certainly appear in any final stimulus legislation with large allocations for infrastructure spending.

According to the Metropolitan Transportation Authority, the economic impact of capital spending can be roughly estimated by assuming every $1 billion equates to 8,700 jobs, $54 million in wages, and $1.5 million in related economic activity. The House Transportation Committee staff estimates that the $30 billion set aside would create or sustain 834,000 jobs nationally.

Furthermore, because of Buy America laws, which require that steel, iron and manufactured goods used in federally funded projects be made in the United States, the benefits from these dollars will extend beyond construction companies. Parts producers, manufacturers, assembly-line laborers and every related industry, from food service to work-clothing companies, will see some of the benefit too.

Because this money may soon be available, states, cities and regional transportation authorities across the country are scrambling to put together lists of ready-to-go projects. Last January both the American Association of State Highway and Transportation Officials and the American Public Transportation Association surveyed member groups about what projects they had in the pipeline that would be eligible for this kind of federal funding.

New York City Transit listed five projects in need of a total of $742 million, including $550 million for the rehabilitation of two dozen subway stations; $30 million for replacing obsolete rails and plates; $100 million for passenger-communications infrastructure at 87 stations; and $62 million for the construction of additional pedestrian overpasses and viaduct spans. The MTA's commuter rail lines responded by listing roughly $35 million in ready-to-go projects, including $23 million for maintenance facility repairs.

In response to the American Association of State Highway and Transportation Officials survey, the New York State Transportation Department listed 40 highway and bridge projects adding up to $200 million, although as of publication, specifics were not listed on the association's website. However, in a telephone interview, Felice Farber, director of external affairs at the General Contractors Association's New York chapter pointed to a Manhattan Bridge rehabilitation project as one that could be eligible for federal stimulus funds.

Of course, both here and around the country, there will almost certainly be more projects seeking funds than money available. The lame-duck session stimulus bill that the House has passed makes clear that fund distribution will be based on existing statutory formulas with preference given to ready-to-go projects. There is no indication of how funds will be distributed in the second stimulus bill, but some area advocates hope that, because of New York State's strong presence on the House Transportation and Infrastructure Committee, as well as Obama's pro-urban inclinations, big cities might do relatively well.

Building on a Bad Foundations

Although transportation and construction advocates long involved in the fight for maintaining the country's transportation system are pleased that the federal government might soon step up and contribute large amounts of money to help the nation's ailing infrastructure, some worry about spending on capital construction at a time when agencies like the MTA are struggling to meet their day-to-day operating expenses.

On Nov. 10, the MTA held an emergency meeting of its finance committee and projected an operating budget gap of $1.2 billion for 2009, growing to upward of $2 billion by 2012. The federal legislation being considered right now would not help the MTA close these gaps but would instead focus on capital construction projects. To runs its subways, trains and buses, the MTA will have to fight for increasingly limited city and state funds, enact internal cost-cutting measures and raise fares and cut service.

"We've raised the alarm on MTA finances plenty of times before, but this is the worst the books have looked in a generation," said Wiley Norvell, communications director at Transportation Alternatives. "We're staring down the twin barrels of big fare hikes paired with big service cuts, and it isn't pretty."

The choices here are complicated.

"It creates a real question to where the money should be going," said Neysa Pranger, communications director at the Regional Plan Association. "It's vital to expand for many reasons, but what happens if fares skyrocket and tracks crumble while that's happening? I don't see that resonating well with the public."

Richard T. Anderson of the New York Building Congress disagrees. "They should cut operational spending before they cut capital," he said. "Cutting capital would be disastrous. If we cut operations it means that each office needs to economize, but if you slash the capital you're hurting the economic growth of the city when you need it most."

Judging by the legislation as it's written now, it seems likely that Anderson and other construction industry advocates will have their way, but there is a lot left to unfold. Congress must first pass a stimulus plan, the president must sign it into law, and New York City and state must be ready to go. All the while new interest groups and new constituencies will be looking for their piece of the pie. One thing is for sure, in an economy like this, it will be a scramble from start to finish.