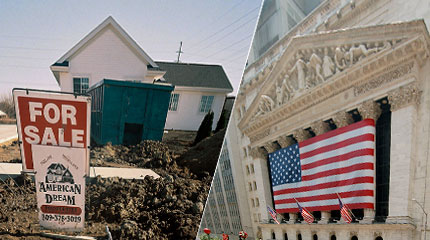 If there were any doubts about the severity of the nation's economic ills, the financial panic engulfing mortgage giants Fannie Mae and Freddie Mac quickly dispelled them last week. As with the mid-March failure of Bear Stearns and its takeover by J.P. Morgan Chase, overnight our economic "leaders" pledged billions of taxpayers' dollars to avert an even greater financial calamity. Once again, the average person is reminded that in our "free enterprise" financial system, profits get privatized while losses get socialized.

The latest bailout provides a further sign that a seriously slumping housing market is dragging down the entire economy. Along with other developments this indicates that the national economy likely will not rebound this year and that the malaise will persist well into 2009.

New York City will not be able to insulate itself from the steadily contracting economy. The markers of a slipping local economy are multiplying with rising unemployment, snowballing job losses, rising food and energy prices, mounting foreclosures and extreme nervousness in Wall Street boardrooms and at city and state budget offices.

Fannie and Freddie began life decades ago as creations of the federal government to support mortgage lending, buying mortgages from banks and vastly expanding the pool of inexpensive mortgage money. Together they hold nearly half of the $12 trillion in outstanding mortgage debt in the U.S. Although that is not technically a debt of the U.S. government, Fannie and Freddie's enormous size mean that the government cannot let them fail.

Four months after the Federal Reserve handed J. P. Morgan Chase $28 billion to buy Bear Stearns, the U.S. Treasury is prepared to lend Fannie and Freddie as much as it takes to save them and, if necessary, to directly invest taxpayer money in equity shares of the mortgage giants. The price tag will make it the mother of all bailouts -- $250 billion or more.

The mortgages Fannie and Freddie buy and hold are all prime. But during the real estate boom, lenders issued many mortgages based on the expectation that housing prices would stay high -- and go even higher. Dean Baker, one of the few economists who warned long ago about the housing bubble, says that Fannie and Freddie helped fuel the bubble through their eagerness to purchase loans made in over-heated markets. With housing prices falling about 20 percent in many parts of the country and certain to fall further, ordinary folks who once had good credit are now walking away from their dream homes. Fannie and Freddie have taken $11 billion in losses so far. That number will continue to grow as the housing slump worsens, compounded by mushrooming defaults in sub-prime mortgage and a general economic recession.

We're not officially in a "recession" until the economic sages of the National Bureau of Economic Research's Business Cycle Dating Committee announces that we are. Always reluctant to make such a declaration this close to an election, the non-governmental committee probably will not render that determination until later. However, six straight months of national job losses already totaling a half million jobs make it pretty clear that if this is not a "recession," it's tantamount to one. The unemployment rate has started to shoot up and for certain demographic groups, such as black men, official unemployment already reaches 9.3 percent.

At the same time, record oil and soaring grain prices have created havoc for consumers and threaten hundreds of millions of poor people worldwide with deprivation and starvation. In the U.S., hikes in the cost of energy and food have forced consumers to curtail spending on everything else, exacerbating the downturn. The $100 billion in tax rebates paid out over the past two months as part of the federal stimulus package did little to lift retail sales since many households are paying so much more now for necessities and trying to make up for disappearing and shrinking pay checks.

New York City is starting to see monthly job declines, with a combined loss of 5,000 jobs in May and June. For the past three calendar years (2005 to 2007), New York City job growth averaged about 1.8 percent a year, or 67,000 jobs annually. For the first half of this year, job growth has slowed to a crawl. Wall Street has shed 7,500 jobs since last fall, still far below the 22,000 suggested by news accounts. (The Labor Department attributes this discrepancy to the fact that many Wall Streeters facing layoffs are kept on payrolls while they receive severance pay. Eventually, the layoffs will reduce the Wall Street headcount.)

Record tourism due to the low value of the U.S. dollar has contributed to continued job growth in retail stores and in restaurants, sectors that would normally slow in a weakening job market.

As job losses spread to more sectors and deepen in finance and professional and business services, the city's overall job level will shrink much further. City and state budget forecasters foresee sizable net job losses over the next several months with the mayor's office projecting the city will lose approximately 90,000 jobs by the spring of 2009.

Over the past two months, the city's unemployment rate jumped by seven-tenths of a percent from 4.7 percent in April to 5.4 percent in June, matching a similar increase at the national level. Initial claims for unemployment insurance in the city are running about 10 percent higher than they were a year ago.

While daily papers seem to relish reporting continued high prices for Manhattan condos, city tax records show home values in the other boroughs are falling and mortgage foreclosures are mounting. By early this year, 15 percent of all sub-prime mortgages in Brooklyn were already in foreclosure with many more headed that way. The slowing job market and rising food and energy prices are beginning to severely pinch household budgets across the city. More families must turn to food pantries; the New York City Coalition Against Hunger reports a 9 percent increase in the number of meals food charities served in March and April compared to a year ago. Skyrocketing energy prices pushed up the New York metro Consumer Price Index by one percentage point in each of the past two months.

Whither Wall Street? Whither New York?

The unprecedented Fannie Mae and Freddie Mac bailout, the prospect of rising bank failures and reports of continued losses at major Wall Street banks paint a picture of severe and deep-rooted problems in the nation's financial sector. These problems, together with the continuing fallout from the bursting of the housing-market bubble, have pushed the economy down and are likely to keep it there for the next several months. National economic policymakers are facing their greatest challenge since the Great Depression as we grope our way toward a new financial order.

For New York City this means that the near-term economic outlook is for a moderate recession at best. Job losses over the next year may turn out to be less than earlier in this decade, but the loss of 80,000 or 90,000 jobs (about 2.7 percent of all private jobs) is still substantial. We also face financial and housing problems and rising food and energy prices that did not exist during the last recession.

Moreover, the city's economic outlook is clouded as never before by Wall Street's uncertain fate. Over the past quarter century, the financial sector has dominated the city's economic fortunes, taking it for a roller coaster thrill ride through both up and down cycles. Right now, the ride is a lot more harrowing than we bargained for: We're moving fast and headed down, and we don't know what lies ahead around the corner.

James Parrott is deputy director and chief economist of the Fiscal Policy Institute. He has been studying and writing about the New York economy since he landed in New York City a quarter century ago.Â