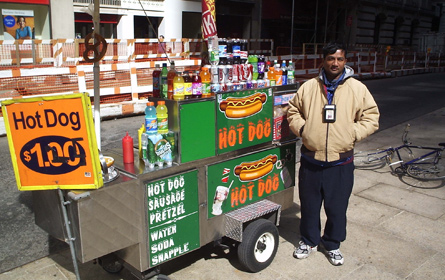 Spring in New York means cherry blossoms in the Brooklyn Botanic Garden, the Yankees home opener and the return of vendors to city parks. But while the cherry trees are performing as usual and the Yankees returned to the Bronx to defeat the Angels yesterday, fewer vendors may peddle their wares in city parks this year.

New rules proposed by the Department of Parks and Recreation would limit the number of artists selling their goods in Manhattan's most popular parks. These restrictions on vending come as the city has begun auctioning park spots to food vendors and cracking down on cart and table owners who leave their goods unattended. The rules and penalties, which the city argues are needed to combat irksome and sometimes dangerous congestion, complicate the already difficult situation for thousands of men and women who sell everything from paintings to pretzels on New York's busy streets.

Art in the Parks

For decades, parks have provided a safe refuge for artists to sell their work. Stroll through Battery Park or Union Square on a weekend and you will likely see over a hundred artists displaying their work. But as the parks department proposes new rules to ease congestion, many artists will need to find a new spot or a new job.

Unlike vendors who sell hot dogs or handbags, those who vend "expressive matter," such as books, paintings and photographs, are protected by the First Amendment. This has allowed art vendors to display their goods inside city parks, while purveyors of more mundane goods, such as hot dogs, cannot.

The department has tried repeatedly to rid the parks of art vendors, but always lost in the courts. Its latest attempt would restrict the number of art vendors to 9 in Battery Park, 18 in Union Square, 5 on the High Line, and 49 in Central Park’s high-traffic areas. If the new regulations pass, the spots will be distributed on a first come, first serve basis, potentially pitting artist against artist.

The department will hold a hearing on the proposal on April 23.

"The three park locations that the proposed rules effects â€¦ have seen a dramatic increase in street vendors," Manhattan Parks Commissioner Bill Castro said. "This has caused the parks department to come up with new regulations to find a balance between vendors and visitors."

The rule changes could mean the end of a way of life for many artists. Two years ago, Samira Deroucha lost her job tutoring French. To pay her bills, she began selling her paintings in Union Square.

Deroucha, who emigrated from France in 2001, said the new rules would create more than just a financial loss. "Union Square is one of the only places where local artists can express themselves," she said. "The street artists market is on every single tourist guide, and it would be a loss to the city if they got rid of us." 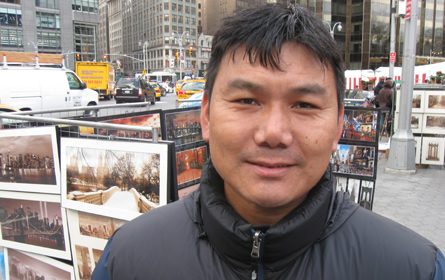 Jampa Jordan sells photos in Columbus Circle. While selling of food and clothing is restricted, photos and other "expressive matter" is protected by the First Amendment. The city, though, wants to put some limits on the art vendors, as well.

"If these rules pass we're going to defy them and sue the city," said Robert Lederman, the president of A.R.T.I.S.T., or Artists' Response To Illegal State Tactics, an advocacy group that represents about 1,500 street artists. Lederman and fellow art vendors will protest the rule changes before the parks department’s public hearing next week.

Castro said the law is on the city's side. The proposed rules, he said, don't "violate anyone's first amendment rights. Government has the right to place restrictions based on time, place, and manner."

Many of the art vendors, though, suspect the limit is an attempt to privatize city parks and get vendors to bid on spots.

Recently, the department granted Cake & Shake a permit to sell gourmet cupcakes in front the Metropolitan Museum, an area that has been off limits to most food vendors. In return, Cake & Shake will pay $108,000 to the city. The cupcake vendor also will pay $27,000 for a spot in Washington Square Park.

For years, the city auctioned spots around the Metropolitan Museum of Art to food vendors. The permitting more or less fell apart, though, when military veterans set up shop, saying they could sell without leasing the spot from the city. Last summer, the city cracked down, forcing out most of the hot dog vendors.

Now the parks department wants vendors back -- but not just any vendors. After reportedly saying it was looking for "healthy options," the administration selected Cake & Shake, a Long Island based company that sells $3 cupcakes and $5 shakes.

Castro said any vendors forced off the museum steps or out of the major Manhattan parks still will be allowed to "sell their goods in other city parks and the thousands of miles of city sidewalks." Hakim Elnagar might tell him that's not as easy as it might sound.

Standing on 42nd Street, two blocks west of Times Square, Elnagar watches as the flow of pedestrians quietly pass by his cart. In over half an hour only one person stops to ask for a pretzel.

Elnagar left Egypt 13 years ago to find a better life for his family. As he has tried to build his business, he has found that the life of a street vendor is not easy. He and his fellow vendors must contend with rival pushcarts and local businesses, with tickets and police, and with a system of licensing that has created a black market of illegal permits.

On Friday, Elnagar will appear in court to contest a ticket he received for vending in a bus stop. Elnagar said he will argue that the bus in question is a private tour bus that parked illegally and that his cart remains more than 100 feet away from a city bus stop.

The stakes for Elnagar are high. The maximum penalty for such violations reaches $1,000, a lot of money for the average street vendor, who typically brings in about $14,000 to $17,000 a year. In the past year alone, Elnagar received 17 tickets, most, he says, he did not deserve.

"The biggest problem that vendors have is tickets," said Sean Basinski, the director of the Urban Justice Center's Street Vendor Project, an advocacy group that provides legal representation for street vendors. Shuffling through a large pile of tickets, which has been growing over the past two months, Basinski picks out a few he views as particularly ridiculous: a shish kabob seller who left his cart window open, a fruit vender with a moldy blueberry, and vendor whose cooler stuck out from under his table. Police officers fine these slight infractions, Basinski says, because street vendors are "easy targets."

To combat the ticketing, the Street Vendor Project provides measuring tape and cameras while encouraging its member to take down the names and badge numbers of police officers. Basinski admits that this is sometimes easier said then done. Some police officers roll up their windows and write tickets from inside their patrol car without giving vendors a chance to get names or ask questions.

Elnagar has contested tickets before and knows how the process works. He is confident the charges will be dropped, but even if he wins, Elnagar will still take a loss. "The captain says, 'I'm sorry for the wrong violation,' but what does sorry do for me?" he asked. "You take a day away from me, and the 50, 60, 70 dollars I make for my kids."

To further complicate the picture, in January, the health department began to enforce its policy of removing the license sof vendors who leaves their carts unattended. Under the new policy, "Any mobile food vending unit which is found to be unattended or which a vendor has abandoned shall be considered an imminent health hazard."

The policy has come under criticism for leaving vendors unable to answer when nature calls. On Feb. 23, street vendors protested outside the health department's offices after peanut vender Mohammed Shirajul Islam lost his license for taking too long a bathroom break.

According to the health department, "The department’s rules do not prevent vendors from taking short breaks, but leaving food unsupervised poses a serious health hazard as it subjects the food to possible tampering." Critics, though, claim that anyone who wants to tamper with food does not need to wait for a vendor to relieve himself, but only to walk to the salad bar at the local grocery store.

While the vendors see themselves as small businesspeople struggling to make a living and provide a service, many brick and mortar businesses have a different view of street selling. "It's a huge problem for our commercial and retail businesses," said Joseph Timpone, the director of operations for the Downtown Alliance. "It’s a problem for pedestrians trying to get around."

"We have areas where there is no vending allowed at all, and every day we have people setting up in the World Trade Center, a problem for the thousands who take the PATH," he said.

Unlicensed vendors and those who ignore vending laws cause dangerous "traffic conditions," according to the Manhattan district attorney's office. On Canal Street, pedestrians often must step into the road to avoid sidewalks clogged by handbag, t-shirt, and luggage vendors.

In 1979, the city placed a cap on the number of licenses available, about 3,000 for food vendors and 853 for general merchandise. In 2008, Mayor Michael Bloomberg’s initiative to get healthy food into poor neighborhoods resulted in the approval of 1,000 new "green carts" for fruit and vegetable vendors.

There is a loophole, though. The cap has not applied to veterans since World War II veteran Joseph Kaswan cited a Civil War era law to challenge a ban on street vendors in midtown.

Even with that exemption, the competition for licenses remains strong. At one point the city established a waiting list for individuals wanting to obtain a vending license. So many applied, though, that the city has not accepted any new names 2002.

With the market largely frozen, vendors who retire or move on to other occupations, continue to renew their licenses every two years for a $200 fee, and then rent them out for upward of $12,000. By some estimates, nearly two thirds of the food licenses are obtained in this way.

The health department has taken steps to combat the practice, but some feel their efforts have not gone far enough. To encourage people to report the illicit sales, the Street Vendors Project has proposed that vendors who report illegal license brokers receive a chance to obtain their licenses legally, and become sidewalk entrepreneurs.

Then, though, they would be on their own.