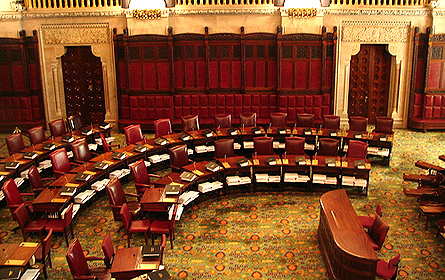 "It's a real mess," said Lt. Gov. Richard Ravitch, speaking on Tuesday afternoon about the budget situation in Albany. "And that is something you already know," he added, half smiling, half wincing. "The second thing you need to know," he said, "is that everything they are doing, the longer they put off making cuts, the longer they take to decide, it amounts to deferral, it amounts to more borrowing."

Mayor Michael Bloomberg is expected to unveil his budget proposal today , and he will have to do that without knowing how much money the city will get from the state in the coming fiscal year. Already the Bloomberg administration contends Albany's proposals would slash about $1.3 billion from the city, including massive cuts to education aid. (The state puts the figure at around $1 billion.)

The likely scenario for tomorrow is that the mayor will budget conservatively in the face of the state's fiscal crisis and inability to reach agreement on the budget. The state budget already is over a month late, and while the principals insist they are working as hard as possible to come to a deal, there aren't many signs that one is imminent.

"The mayor is going to have to decide whether to be conservative or optimistic in his budget estimates," said Ravitch, "In this case I don't think it would be appropriate for him to be optimistic."

Earlier in the year, Ravitch proposed a plan that would have instituted new accounting measures and allowed for borrowing to balance the budget, with certain strict guidelines. The Senate and Gov. David Paterson have rejected the plan, while the Assembly seems keen on borrowing -- whether they want unrestricted borrowing or Ravitch's plan is unclear.

But that is not the only source of tension. The Senate is said to be pushing hard for "property tax relief." (Don't call it a cut or you will be quickly corrected.) Many see the move as a bid to win support from suburban and upstate districts heading into an election season. The Assembly is apparently more concerned with reducing Paterson's proposed cuts to education and health care. Any type of property tax relief would benefit upstate and suburban areas where more people own property, while restoring education and health cuts would more likely benefit the city.

Meanwhile, the state's finances are growing bleaker by the day.

The state is expected to run out of cash by June unless a budget is put in place. In June, a number of payments to school districts and other groups that Paterson deferred earlier this year will come due. The state owes $4.1 billion to schools, including new and deferred payments. The budget office estimates the state will be $1 billion short. There is talk among legislators that the state could borrow to make the payments, but Ravitch says it's unclear whether borrowing is legal when there is no budget in place. "This cash flow crisis in June is very real," he said.

It isn't exactly uncommon for the state budget to be late. The legislature has passed an on-time budget only five times since 1975. Lately, budgets have come in closer to the March 31 due date: Last year, the budget was about a day late. But things are different this year. Besides the extremely narrow Democratic majority in the Senate, a lame duck governor and election season just around the bend, the state faces a rapidly increasing $9 billion budget deficit.

De Francisco: The GOP is shut out

Outside Ravitch's office last Tuesday around 3 P.M. the session bells are ringing, but no one is answering them. Advocates and lobbyists wait outside the senate chamber; inside the seats are all empty. "Think they are gonna do anything today?" asks a staffer, "I wouldn't bet on it," replies another. The Senate will consider real legislation today, but the budget is not on the agenda. "It's like [the movie] Groundhog Day here," says another staffer, "Every day is the same as the last."

Sen. Ruben Diaz stands on the Democratic side of the Senate chamber, looking confused. "Where is everyone?" he asks of a staff member. He declines to discuss how the budget mess could affect New York. "Ask the guys upstairs," he says refering to Paterson, Assembly Speaker Sheldon Silver, Senate Democratic Conference Leader John Sampson and other senior legislators who are involved in budget negotiations.

Senate Finance Chair Carl Kruger hasn't disclosed much about the budget negotiations. He tells Republican Sen. John DeFrancisco that talks are so sensitive that details can't be discussed in deference to the other side. Republicans have raged that the Democrats have completely ignored rules that require conference committees with members of the Assembly and Senate from both parties to hash out the budget in public.

In response, Democrats last month invited the Republicans to a five-way leaders meeting on the budget. The Republicans declined, claiming the invitation was only a charade.

DeFrancisco insists that Republicans have not been consulted on the budget and is certain that the Democratic leadership will simply dump the final proposal in their laps one day and schedule a vote on it hours later. It happened that way last year.

Standing outside of the office of Senate Minority Leader Dean Skelos, Kruger, grimacing, said "The budget is a moving target. We've had three-way negotiations; we had five-way negotiations."

As to what it means for the city, he continued, "The city could lose millions of dollars. We would like to restore some of that, but each conference has their own priorities. When we had money, it was about who gets how much. Now it's about who gets enough."

The city may well have an ace in the hole in the negotiations. As Republican leaders constantly point out, all of the key players at the negotiating table represent New York City, and it is an election year.

"I think it is unfortunate that a lot of municipalities will have to make conservative estimates, but we hope to get this budget done soon, and hopefully they will get to move those estimates up," said Sen. Kevin Parker.

In the meantime, though, the state is left with stopgaps. So far, Paterson has proposed -- and the legislature has passed -- bare bones budget extenders. More almost certainly will be needed.

With each extender, Paterson is expected to introduce more ways to save the state money. The legislature is likely to accept them, because members are afraid to vote against something that will keep the state government running. Most recently, Paterson introduced a measure that will furlough 100,000 state workers for one day a week, without pay. It is expected to save the state $30 million a day. But union heads question the legality of the furloughs and are expect to challenge them in court.

Other emergency actions Paterson has taken, such as discontinuing payments for construction projects on state owned roads and bridges, are being contested in the courts and the legislature. Contractor groups are suing the state to restore funding and unions representing state workers are expected to sue the state if the furloughs go through. Most of those measures are expected to be repealed once a budget is adopted. Paterson has requested that legislators stay in Albany five days a week to at least keep up the appearance that budget negotiations are a priority.

On Wednesday, legislators held their morning session and departed for their districts.

At this point if you want to know when you can expect a budget deal, as Diaz said, you should ask the guys upstairs.

They probably won't tell you.