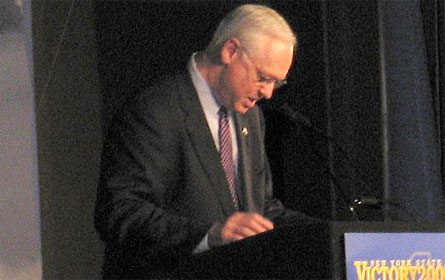 Try to catalog how many times the Republican candidate for state comptroller, Harry Wilson, used the term "under investigation" to describe Democratic incumbent Tom DiNapoli during their Oct. 4 debate. You will likely lose count. But with one release from Attorney General Andrew Cuomo’s office announcing DiNapoli is no longer under investigation, the focus of the contest between the two men -- and of Wilson's attack -- changed.

With the potential scandal evidently out of the way, perhaps the candidates will now focus on other differences between them: what effect, if any, the comptroller can have in navigating the state through this fiscal crisis and how to manage the huge state employee pension fund.

Both candidates have tried with all their might to label each other with the negative baggage of their backgrounds.

Wilson says DiNapoli is an Albany insider picked by the legislature to oversee its spending and he is accustomed to pay-to-play politics.

DiNapoli charges that Wilson has spent years on Wall Street and says that Wilson comes from the kind of reckless financial culture that landed the country in its current financial emergency.

As he campaigns, Wilson, who served on President Barack Obama's auto industry task force, hammers away at the state's precarious fiscal situation and says the government must curtail spending. He insists that DiNapoli has not done enough to attack government expenditures, saying DiNapoli should have audited programs in the budget and pointed out areas that need trimming

Wilson, though, said the state comptroller can do far more than that. "I wouldn't start on April 1 when the budget is due but on Jan. 1. There needs to be a review of all spending. The office should come up with spending cuts. I have the skills to do that. I would work with the governor to create a better budget." Wilson said last week.

DiNapoli said he has been using the comptroller's office as it is designed -- he conducts audits of state spending, announces his findings and tells the legislature and public where he thinks spending could be controlled.

Further, Wilson said, if the proposed budget was not balanced he would not certify it. "If spending and income are out of line then you don't certify," he said. In other words he would reject the plan and refuse to pay out the funds allocated in the budget.

But according to DiNapoli the comptroller does not have the power to certify or not certify. "We have no role in certifying it [the budget]. People have the incorrect notion that we do it," he said. "That is a policy change for the governor and legislature."

The comptroller does get to issue revenue estimates for the state when the legislature and governor can't agree on the numbers. DiNapoli has issued projections that are more pessimistic than those of the governor or the legislature.

But DiNapoli said any direct involvement by his office in setting spending or revenue estimates would jeopardize the office's role as independent auditor. "If we were involved in the process it would create a conflict, reduce our independence and could compromise our auditing ability," he said.

Wilson says that he has consulted counsel on the issue of certification and was told a comptroller could legally refuse to approve the governor and legislature's spending plan. "Mr. DiNapoli said he consulted the attorney general and was told that he can't. But during his campaign against [former comptroller]] Carl McCall, the current attorney general Andrew Cuomo criticized Carl McCall for certifying bad budgets, so he must agree with me," Wilson said.

Gerald Benjamin, professor of political science at SUNY New Paltz, says that, under his understanding of the law, the comptroller has no role in certifying the budget and is not supposed to directly help the legislature or governor come up with their plans.

"The legislature is not required to prepare a balanced budget," said Benjamin. "The comptroller's duty is to perform his own survey -- he can say if he thinks the budget is balanced and say if he perceives any risks on the spending or income side. He can use the position as a bully pulpit. The idea that the comptroller can stop the budget by not paying out is kind of a nuclear option and I don't think it is politically feasible."

Benjamin points out that Article 5 of the state constitution says that the legislature shall not give the comptroller any "administrative duty." 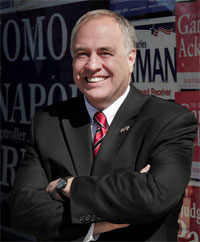 DiNapoli said he has used his office as allowed by state law to weigh in on the state's budget problems. "We have been outspoken and sounded alarms, saying that the budget isn't balanced. It hasn't solved all the budget problems but I am optimistic, given the current climate, that the next governor and the legislature will approach things in a better way," he said.

Wilson, however, said DiNapoli could have done more, and that DiNapoli's loyalties to the legislators who appointed him comptroller have stopped him from seriously examining how they spend taxpayer dollars. DiNapoli also served in the Assembly for 20 years.

"He seemed proud," Wilson said of DiNapoli who told the crowd at the debate how many legislators had approved him as comptroller. But Wilson says that vote ties him to the legislature and he points out that this is the first time voters will get to weigh in on DiNapoli. Both candidates have agreed that they think the comptroller should be replaced by the voters if a similar vacancy should occur in the future.

Wilson suggested he would use audits to put pressure on legislators. "If there is an audit of a spending program that shows serial abuses of spending and it would be embarrassing for legislators if it was aired in public, I will have leverage to change things," he said.

It isn’t clear how this would differ from DiNapoli's approach as he has done many audits.

Wilson said he expects the next governor will want to work with him on putting together a good budget because of the trying fiscal times.

Still, the most controversial issue surrounds the pension fund. The comptroller's office has almost total control of the state's $124 billion pension fund. The fund has been a source of controversy because of the investigation into how the administration of Alan Hevesi, DiNapoli's predecessor, handled the investments. During Hevesi's time in office, placement agents steered the state's money into investments with their friends' companies. Campaign donations also were allegedly a good way to get the state to invest pension cash.

At the time of the debate, word was that Cuomo was investigating DiNapoli's handling of the state pension fund as an extension of the Hevesi probe. DiNapoli was named to his position by the legislature in 2006 after Hevesi was forced to resign.

But last week Hevesi pleaded guilty to taking $1 million in gifts from Markstone Capital Partners in exchange for the state making $250 million in investments with Markstone, and Cuomo's office finally responded to inquiries about an investigation into DiNapoli's office.

"During the investigation, the office reviewed an investment known as Intermedia, which was approved for investment under then-New York State Comptroller Alan Hevesi and increased under Comptroller DiNapoli," read the statement. "The office has concluded our review of that investment and determined that no action is warranted. Mr. DiNapoli is not involved in any investigation or matter in this office."

DiNapoli, in other words, was off the hook.

A few days later, the DiNapoli campaign demanded that the Wilson campaign stop airing television spots that refer to the incumbent comptroller as "under investigation." Wilson's campaign responded saying serious questions remain about how DiNapoli handled the pension fund in his first two years as comptroller.

DiNapoli said he has changed the culture of the fund and has done away with placement agents. "It's not like I just sit in my office with the financial papers and decide we are going to put this much money here," DiNapoli said pointing out that his office has a large staff that reviews investments.

Wilson, however, said it took 26 months for DiNapoli to make any reforms in how his office handled the pension funds. "For 26 months the process went on with placement agents," said Wilson. "Who did he meet with?"

According to Wilson, DiNapoli had one meeting "with two people who have paid settlements" arising from their involvement in the pension fund scandal. 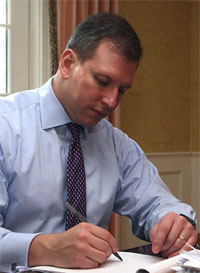 Wilson said his campaign has tried to use the Freedom of Information Act to try to gain access to DiNapoli’s schedule, "but we were told on that on Oct. 28 they will tell us how much it will cost," that would leave the Wilson campaign with little time to explore the calendar and investigate who DiNapoli met with.

"The schedule is FOILable," said DiNapoli. "Journalists have gotten it. My opponent makes things more complicated than they have to be.”"
"Are you kidding me, Mr. DiNapoli?" asked Wilson. "If you don’t have anything to hide then show us your planner."

Where to Put the Money

The candidates also disagree about what kind of investment strategy the office should pursue.

Wilson said he would significantly reduce the amount of risk involved in pension investments, putting the money in safer, if less profitable, places.

"I would reduce the risk portfolio. We would have lower returns but it would be better in the long run," said Wilson. "We have to pay retirees come hell or high water."

DiNapoli says that his office has reduced the risk portfolio and by extension the returns on the fund, but he said the size of the reductions Wilson is considering worry him.

"I've heard him talk about reducing it down to a 5 percent return. That would be devastating. It might make it impossible to meet the needs of the pension. The idea that someone from that Goldman Sachs background would reduce the risk is hard to believe. Reducing the returns could lead to an inability to meet the payouts, and that would lead to tax increases, so in a way it would be more risky," DiNapoli said.

Before Cuomo's office gave him a clean bill of health, DiNapoli was thought to be the weakest statewide Democratic candidate, despite his lead in the polls. Wilson is the best funded Republican candidate.

"I think we have strong bipartisan support," Wilson said, "Most of his contributions were from unions and PACS, and mine were from individuals."

On Oct. 1 DiNapoli had $1,407,449 on hand while Wilson had $2,626,236. Wilson loaned himself $500,000 and has loaned himself over $2 million over the span of the campaign. A look at DiNapoli’s fund raising filings show significant contributions from unions and political action committees. Wilson's contributions do mostly come from individuals.

Wilson has attacked DiNapoli for taking campaign donations from trial lawyers that represent his office, calling it another example of "pay to play." DiNapoli's campaign says that donations do not influence DiNapoli’s decisions.

Without the investigation hanging over his head, DiNapoli should enjoy a stampede of Democratic endorsements. But even with a recent endorsement by former comptroller Carl McCall, DiNapoli isn’t betting his house that support will pour in. "I'm not as much involved in getting endorsements as I am in doing interviews, speaking to the people. I am more concerned about the stampede of voters in November," he said.

DiNapoli has yet to be endorsed by Cuomo, and Wilson has distanced himself from Republican gubernatorial candidate Carl Paladino. Perhaps both want to look independent.