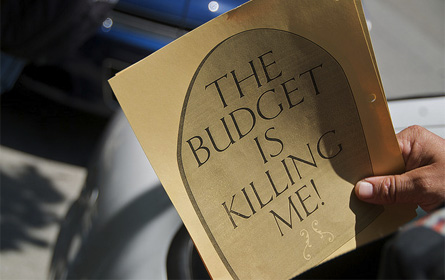 Mere hours after the City Council and the Bloomberg administration announced an agreement on a mid-year budget plan, officials and advocates braced themselves.

One budget battle may be done, they said, but more spending clashes and collisions are hurling towards City Hall.

"We're thrilled with any amount of restoration," said Michael Stoller, executive director of the Human Services Council. But, he added, "With no one entertaining any ideas of raising revenue . . . we are really nervous."

He probably should be.

The agreement announced Thursday will reduce this year's $63.1 billion budget by $585 million. The City Council convinced the mayor to trade in slashes to the Fire Department and the Administration for Children's Services for more palatable reductions in the technology and consulting budget at Department of Education. The council dug up excess revenue in other agencies to provide a lifeline for senior case management and programs for runaway and homeless youth.

In total, it prevented $35 million in cuts to its pet programs.

But most see this as merely temporary relief.

The Bloomberg administration has already announced $1 billion in cuts for the fiscal year 2012 budget, which starts in July. On top of that, the city still faces a $2.4 billion budget gap.

Both the mayor and the leadership of the City Council have said they will not entertain tax increases. That leaves officials, advocates and public employees left to contemplate what else will be on the chopping block and whether their job or program will be gone for good.

Down to the Bone

Already some of the cuts the council staved off will have an encore.

The council prevented parking meter increases in the outer boroughs and the doubling of membership fees at recreation centers.

Both are set to come back in the mayor's preliminary budget, which will be released later this month.

The council staved off a $3.3 million cut to case management services for the city's elderly. But, according to the mayor's November plan, the same program will be cut by twice that in the next budget.

"When the city starts proposing cuts below the bone to 85 and 90-year-old people, it's pretty clear we've gone down a road that’s not good to go down," said Bobbie Sackman, director of public policy at the Council of Senior Centers and Services.

The council prevented the mayor from shutting down 20 fire companies at night.

"It seems like the Bloomberg administration is intent on closing fire companies," said Steve Cassidy, the president of the Uniformed Firefighters Association. "I recognize that the city still is in a fiscally tough time, but my argument is going to be on public safety and firefighter safety."

Advocates predicted Thursday that next year's budget could be the most difficult yet for the city. The Bloomberg administration has already gone through nine rounds of budget cuts.

Advocates and officials in areas that have been targeted by the Bloomberg administration over and over and over again (like aging services, the Fire Department and libraries) are especially concerned over the coming budget.

"The New York Public Library has seen a 20 percent reduction in city funding since fiscal year 2008," said Angela Montefinise, public relations director of the New York Public Library. "With 400 fewer employees than in fiscal year 2008, the library anticipates that continued cuts will seriously jeopardize hours and days of service at all of our locations. So, yes, there is concern."

Another Billion or More

Not only will the city have to contend with its own budget deficit, but it is likely to get slammed with state cuts too.

Newly minted Gov. Andrew Cuomo refuses to raise taxes to deal with the state's $10 billion deficit, meaning the state's gap will most likely be closed exclusively by spending cuts and a so-called "reorganization of government."

About two-thirds of the state budget, according to the mayor's office, is aid to cities and towns. At least one-third of that aid goes to the city. City budget officials predict the five boroughs could see a $2 billion to $3 billion cut from the state come April.

"They already expect difficult times ahead," said Doug Turetsky of the Independent Budget Office. "Depending on what the governor proposes and depending on what actions Albany takes to fix its problems and how much of that gets thrown into New York [City's] lap, it could make things harder."

The Independent Budget Office projects the city will end fiscal year 2011 with a $1.7 billion surplus -- a more optimistic projection than the mayor's office. Should that play out, cuts might not be as deep as predicted.

Despite the rough road ahead, the council leadership is confident they can come up with a budget compromise without burdening the city's most vulnerable.

"We have always had productive, focused budget negotiations," Quinn said on the looming fiscal debate. "I am not worried."