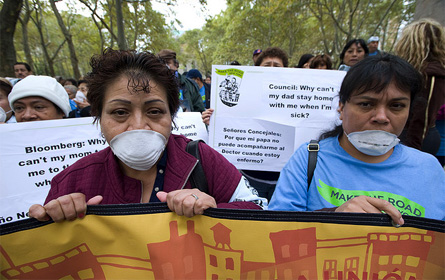 In November, City Council Speaker Christine Quinn stood on the steps of City Hill and made an impassioned plea on behalf of working New Yorkers cheated by their employers out of wages they had earned. "When people work hard they get a paycheck, or they get the tips that are part of the job, that's money earned, and money they should get to take home to their family or to put into their bank account!" she declared.

Surrounded by victims of wage theft organized by community group Make the Road New York, Quinn called for state passage of the Wage Theft Prevention Act, which increases penalties and strengthens enforcement of wage laws, cracking down on violations estimated to cost New Yorkers as much as a billion dollars a year. Later that afternoon, the council passed an official resolution urging the state to enact the wage theft bill. Two other pro-worker resolutions also passed: calling on the Port Authority to adopt environmental and labor standards modeled on the successful Port of Los Angeles Clean Truck Program and exhorting Congress to pass the, Zadroga Act funding medical treatment for 9/11 first responders and clean-up workers.

Together, the council's three resolutions are a clarion call for greater workplace justice in New York: Truck drivers servicing the region's ports should not suffer exploitation, workers who responded to an attack on our nation deserve to have their health problems addressed, and no one should see their paycheck stolen from them. But unlike intros -- the Council's term for bills -- resolutions don’t have the force of law. Instead they are a formal statement of the Council’s position on an issue beyond their immediate jurisdiction. That does have some influence. With the City Council contributing to the chorus of voices in support of this legislation, the wage theft bill and Zadroga Act were subsequently signed into lawand the Port Authority has since met with a delegation of port truck drivers.

The bully pulpit has served the council - and workers -- well. Now, though, with the 2011 legislative session up and running, the city must go further and use its own legislative powers to advance the well-being of working New Yorkers. Several measures currently before the City Council would help the cause.

The city could start by heeding the voices of thousands of clergy members and parishioners from many faiths across the city who have signed postcards and marched in support of the Fair Wages for New Yorkers Act, making the case for a moral imperative to treat the poor justly. The bill would require that the estimated $2 billion in taxpayer money that New York City spends each year to subsidize economic development be used to foster jobs that pay a living wage. At a time of huge shortfalls in the city budget, the city that is already home to the greatest inequality in the nation cannot afford to continue doling out billions to companies in exchange for low-wage jobs that offer no benefits and keep workers and their families mired in poverty.

In a renewed effort to promote the bill, some council supporters have proposed that it exempt businesses with revenues of less than $1 million a year, nonprofit groups and some employers in developments primarily made up of affordable housing. The bill now has 29 sponsors -- nearing the 34 that would be needed to override a potential veto by Mayor Michael Bloomberg. Having that many sponsors, though, does not however guarantee passage, since a bill cannot come to a vote without support from Council Speaker Christine Quinn who has not yet taken a public stand on the measure.

New York should also reconsider legislation that would guarantee everyone working the city the right to earn paid sick leave. Polls indicate that 75 percent of New Yorkers support a law requiring employers to provide paid sick time, a benefit that 1.65 million city residents currently lack. A veto proof 35 members of the council have signed on in support of this. The bill, though, has been stalled since October, when Quinn decided not to schedule a vote on paid sick legislation, announcing that she would reassess the situation if the city’s economic climate for small business improved. Given that research from the Drum Major Institute for Public Policy finds guaranteeing paid sick leave does not damage employment or harm the growth of small businesses, this policy is due for reconsideration. [Full disclosure: I contributed to the design of this research.]

Finally, the city must take a stand for its own jobs, seeking new revenue to avoid the mass layoffs proposed by Bloomberg in his recent budget announcements. Preventing job cuts would not only help to preserve public services New Yorkers depend on but would strengthen the city’s overall economy. Research suggests that for every 100 public employees laid off, an additional 30 private sector workers also lose their jobs. Avoiding city layoffs is thus a way to hold onto both public and private sector employment.

Economists, including Nobel Prize Winner Joseph Stiglitz, have concluded that because well-off households tend to spend a lower proportion of their total income, raising taxes on the wealthy is economically preferable to cutting services and laying off public workers during a recession. The City Council’s Progressive Caucus proposes an elegant mechanismfor New York's best-off earners to contribute to their city: an income tax surcharge mirroring the tax break wealthy New Yorkers will receive from the recent extension of the Bush tax cuts. While the surcharge would ultimately need to be enacted by the state legislature, a city endorsement of the proposal would be the first step.

Resolutions on wage theft, clean trucks and health care for 9/11 first responders and clean-up workers sent a powerful message about New York's concern for workplace fairness. By enacting a living wage law for companies that receive city economic development subsidies, guaranteeing paid sick leave to all working New Yorkers, and acting to prevent city layoffs that will destroy jobs in the public and private sectors, New York can take the next logical step of using its own substantive law-making power to make the city a fairer place to work.

Amy Traub is director of research at the Drum Major Institute for Public Policy.