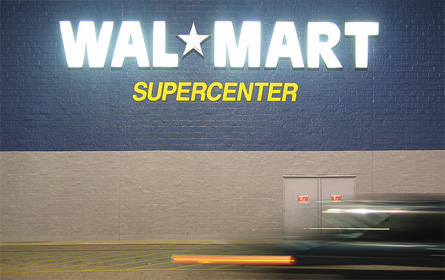 It was a relatively quiet morning in front of Atlantic Center -- the usually buzzing Brooklyn shopping complex kitty-corner to the site of Atlantic Yards.

Mikey Richardson, 29, had a Target bag in one hand and a cigarette in the other. Richardson comes to Target -- the anchor store in the center -- once or twice a month for the occasional household item.

Last week it was a power tool set.

The 29-year-old Crown Heights resident has no problem unloading his wallet at this particular national retailer, which boasts more than 1,700 stores throughout the country.

But Richardson changed his tune when it came to its competitor, the world's number one retailer: Wal-Mart.

"It would hurt these small businesses, so I am going to say 'No,'" Richardson said of supporting a Big Apple Wal-Mart.

For the second time in a decade, Wal-Mart, which boasted $408.2 billion in revenue in its last fiscal year, is exploring a New York City location. In 2005, the corporation attempted to settle in Rego Park, but was driven away by a cacophony of community opposition.

This time around Wal-Mart is trying to appeal directly to New Yorkers. It has stuffed flyers into mailboxes and flooded the airwaves with calls for support. Wal-Mart plans on circumventing the City Council by landing a location that could be developed "as of right" -- with no need to go through the land use process.

It may have set its sights on Brooklyn.

Wal-Mart argues New York already has chain stores and national retailers. The skyline is dotted with Best Buy, Target, Bed Bath and Beyond and more.

So, why not Wal-Mart?

Wal-Mart Versus the Big Apple

Earlier this month, more than two dozen members of the City Council hosted a standing room only crowd in Lower Manhattan.

The topic: What effect Wal-Mart could have on the Big Apple's economy? Wal-Mart did not attend the hearing. By focusing exclusively on Wal-Mart, its executives argued, the meeting was unfairly targeting the company.

Council officials, however, say it should.

"Wal-Mart is in a category by itself," said Councilmember Karen Koslowitz, the chair of the council's Consumer Affairs Committee, at the hearing. "Wal-Mart's main competitors are Costco, Target, Sears and Kmart. Wal-Mart by itself exceeds the number of stores, employees, annual revenue and profits earned from each of these companies combined. Clearly Wal-Mart is different."

An inventory of national retailers in the five boroughs. Created by Alshawn Kelly Rushing.

Every one of those competitors -- and then some -- have New York City locations.

Target has seven. Costco has a location in every borough. There are at least five Kmarts in the Big Apple.

"The competitors do lower wages in order to compete when Wal-Mart comes in," said Ken Jacobs, the chair of UC Berkeley's Labor Center. "Target and Best Buy just aren’t big enough to have the same kind of effect."

In addition to the size of the company, Wal-Mart opponents cite the mega-corporation's so-called poor labor practices, including low wages and a failure to provide health care benefits.

But when it comes to average wages, Wal-Mart does not differ from other big box stores already rooted in New York City.

The Wal-Mart wage is far less than what a cashier would make at Costco, which IBISWorld estimates pays an average of $15.50 per hour.

According to an analysis by the Fiscal Policy Institute, the average wage for a unionized retail employee in New York City is about $13.33 an hour.

At Costco, 90 percent of employees are covered by health insurance, according to IBIS. Kmart, Home Depot, Lowe's and Target also offer health insurance, but details of their plans were not made available. Target refused to answer questions from Gotham Gazette for this story.

Industry experts said all of these companies require employees to contribute to these health plans. Given their wages, Wal-Mart opponents said, many could not afford to participate.

Steve Restivo, Wal-Mart's director of community affairs, said 53 percent of Wal-Mart associates are enrolled in their health care plan, and many others are covered by their spouses or are first time employees still using their parents' insurance. Restivo said the company's lowest cost plan is $11 per pay period for an associate and $33 for a family.

While improvements in its health coverage have been recognized, Wal-Mart still makes appearances on lists of employers with large numbers of employees receiving state-subsidized health care.

On top of wages and benefits, criticism of Walmart has centered on the size of the corporation and its proven ability to shut down small businesses and competitors. Advocates and storeowners oppose a Big Apple store in hopes of holding onto New York's mom and pop shop character.

"Wal-Mart has more revenue than Austria's economy, sells more guns than anyone on the planet, and has lifetime history of pushing out mom and pop shops -- there is no comparison between Wal-Mart and anyone else. No matter how many times they use glitzy expensive PR campaigns to remake their image the truth always stays: Wal-Mart eliminates jobs, destroys small business and ruins neighborhoods," said Stephanie Yazgi, director of Walmart Free NYC.

When bashing Wal-Mart, officials also point to a 10-year-old gender discrimination lawsuit making its way to the Supreme Court, which accuses the corporation of failing to promote and provide equal wages to at least 500,000 women.

The City Council is holding an oversight hearing on Thursday on the lawsuit and the corporation's labor practices.

Both Target and Home Depot have had discrimination suits filed against them -- though not on the scale of Wal-Mart's. Home Depot has 21 stores in the five boroughs, according to a spokesperson.

To some, it appears there are more similarities than differences between these big box retailers.

"They all follow basically the same business model, which is based on preying on small businesses, paying low wages, squeezing suppliers, relying on overseas labor that is often exploited by building huge stores," said Stacy Mitchell, the senior researcher for the Institute for Local Self Reliance. "Target's marketing is we're hip, we’re urban. â€¦ It's worth looking at that with a skeptical eye and not assuming the companies are that different because Wal-Mart has a red state, country image."

Restivo treads carefully when asked about Wal-Mart's plans in the five boroughs.

The corporation is reportedly eyeing a site in East New York -- part of a Related development called Gateway II. ShopRite, which is unionized, is also vying to locate there. In an interview with Gotham Gazette, Restivo would not name a single site Wal-Mart is seriously interested in.

"It's no secret we want to open stores in New York City," he said. "We are evaluating lots and lots of opportunities."

In contrast to its pursuit of New York City space in 2005, Wal-Mart is exploring a number of different size stores -- better suited for an urban setting, Restivo said. The typical Wal-Mart is about 80,000 square feet. It also has mid-sized stores, between 30,000 and 60,000 square feet, and plans on pilot testing smaller spaces under 30,000 square feet.

"We have made a lot of changes as a company. Quite frankly, we are a better company than we were five or six years ago," Restivo said. "In the last year especially we have gotten more flexible in our approach."

Wal-Mart isn't just looking at New York City, but it plans on opening stores in cities across the country. One of its first urban stores was built in Chicago in 2006. That location has 150,000 square feet. Restivo said Wal-Mart would eventually have dozens of stores in the Windy City.

He said Wal-Mart had no set number of stores they hoped to have in the five boroughs.

"Just because you live in a big city, it doesn’t mean you have to pay more for products, especially groceries," said Restivo. According to industry experts, Wal-Mart provides 25 percent of all the groceries in the country.

During this month's hearing, not a single council member expressed support for a New York City Wal-Mart. Wal-Mart is currently making its rounds with council members in an attempt to plead its case.

Although the company's support in the city's legislature is frigid, there are plenty of people in the five boroughs who want to see the corporation break ground. The city's construction unions struck a five-year deal with Wal-Mart earlier this month, guaranteeing any new construction or rehabilitation would be done by union workers.

Some residents want to see Wal-Mart because of low prices and the promise of jobs.

Back at Target, Joseph Quinlivan, a 50-year resident of Sheepshead Bay in Brooklyn, had no qualms about a Wal-Mart in his borough.

"Well, I think Wal-Mart should come," the 85-year-old said. "Their prices are cheaper, and it brings jobs."

Even Richardson, the 29-year-old Brooklynite who doesn't support Wal-Mart in his borough, said he would probably shop there if the corporation were successful.