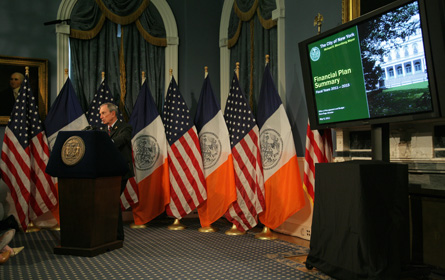 For the 10th time, Mayor Michael Bloomberg stood in the Blue Room at City Hall, clad in a sharp, dark suit, and unveiled his executive budget proposal. After 10 rounds of budget cuts since 2008, totaling $5.4 billion, Bloomberg proposed to make reductions in every department. The $65.7 billion fiscal plan would slash 6,166 teachers, about 2,000 of them through attrition, close four swimming pools this summer and shutter 20 fire companies. The City Council has vowed to fight the teacher layoffs.

Bloomberg blamed the cuts on the state and federal governments. This year's budget represents a steady stream of divestment in the Big Apple by Albany and Washington, the mayor said. Now we will lose services because of it, he added.

"Both places are keeping our tax dollars to close their budget deficits," the mayor said on Friday. "If the state was paying 50 percent or close to it [for the Department of Education], we would not be talking about laying off teachers."

For the first time since the fiscal crisis of the 1970s, the city could lay off large numbers of teachers -- 5 percent of all instructors. The state's share of aid has dropped by 20 percent, the mayor said. To make up for the loss, Bloomberg said the city would use up all of its surplus and nearly $700 million from its health care trust fund, a reserve used to pay for retirees' health benefits.

Immediately following the mayor's morose budget presentation, City Council members and advocates blasted the administration for slashing services for the city's most vulnerable. Others questioned whether the third term mayor was bluffing.

"I am sick and tired of this administration's use of teacher layoffs as a threat to unions and continued attempts to balance the budget by direct cutting services to the neediest among us," said Councilmember Margaret Chin in a statement.

Officials accused the mayor of playing politics. Some saw his threat to lay off teachers as another attempt to pressure Albany to approve certain education changes, specifically legislation to allow the city to lay off teachers based on merit not seniority. The mayor also wants to convince Albany to approve a new pension tier for new city employees.

This is the second time in as many years the mayor has threatened to lay off teachers. It is the seventh time he has proposed closing fire companies.

None of those cuts ever materialized.

"This is a zero sum game, and every year the restoration list gets longer and our ability to restore it doesn’t get larger," said Councilmember Lewis Fidler. "It's going to be a tough year."

Even members of the administration aren’t holding their breath on getting extra funds.

"Until July 1, I'm hoping that something does turn around," said Fire Commissioner Salvatore Cassano. "If it's 20 [companies], the whole city will be impacted."

In addition to the teacher layoffs and the fire companies, the administration has proposed to increase parking rates and fees for inmates to make telephone calls on Rikers Island. It also would reduce the amount of condiments and number of bread slices inmates receive.

Administration officials are exploring whether to start charging nonprofits and churches for garbage collection in 2013. The mayor has proposed to move forward with a plan to house small homeless families in shared apartment style units.

At the budget announcement, the mayor reversed an earlier decision to eliminate 16,000 child care slots. Instead, he said, the city would make sure those kids receive day care through an after school program. The city also plans to increase minimum child care copayments from $5 to $15.

Advocates criticized the move, saying the after school program does not offer the same amount of service.

"Working parents need child care support in order to remain in the workforce, and it is vital for children to receive quality care and early childhood education. Partial restoration of this funding is a step in the right direction. We are hopeful that the mayor will recognize that more funding will be required to prevent irreparable damage to the city's subsidized child care infrastructure and system," said Fatima Goldman, the executive director and chief executive officer of the Federation of Protestant Welfare Agencies.

Senior centers have been held harmless, but the Bloomberg administration would decrease funding at the city's library system by about $40 million. The parks department will also take a hit with reductions in seasonal staff and increased fees at recreation centers and for tennis permits.

Already the council has identified teacher layoffs as its top priority. In order to stave off any staff reductions in the classroom, the council would have to come up with $435 million in funding.

"Since the recent financial crisis and recession, the City Council has worked aggressively to control spending and manage the city's budget in a fiscally responsible manner while protecting vital services," said Council Speaker Christine Quinn and Finance Chairman Domenic Recchia in a joint statement. "That's why we have grave concerns about a budget that allows for teacher layoffs, which would be immensely damaging to our education system and children's opportunities for a quality education. Make no mistake, we will do everything in our power to prevent teacher layoffs."

But it's unclear where the council will get the money to do so.

Last year, the council was able to save $397 million in cuts. If the council were to successfully negotiate to save teachers this year, it could likely be the only restoration the city could afford.

"It's a big lift," said Doug Turetsky of the Independent Budget Office. "It pretty much takes up all the funds they typically get to work with."

No matter what the cuts the council looks to save, it will have to identify other areas of the budget to cut back. Both Quinn and Recchia have said they would not raise taxes. On Friday, Quinn took aim at the administration's outside contracting, arguing if contracts were held flat this year the city could save $100 million.

Meanwhile the council's progressive caucus is urging the State Legislature to extend the state's millionaire's tax and close tax loopholes for hedge fund managers. According to the caucus, those two measures could bring in $570 million.

Other budget experts predict some council members will push for the city to drain its health care trust fund -- now at $2 billion.

On Friday, Bloomberg warned of a projected $5 billion budget deficit in fiscal year 2013. He warned using the fund to stave off cuts this year would be irresponsible and said he would not consider raising taxes to create more revenue.

"I liked his emphasis on how important it is not to spend the rest of the money in the retiree health benefits trust," said Carol Kellermann, the president of the Citizens Budget Commission of the mayor's budget. "I think that's where the battleground will be. He was warning the council that that's an irresponsible thing to do."