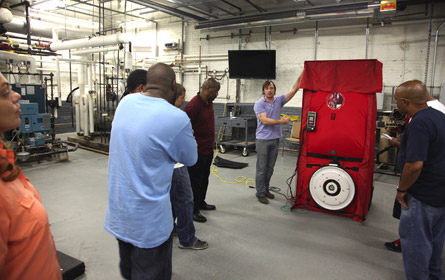 Photo courtesy Association for Energy Affordability
In weatherization classes, trainees learn building science theory as well as hard skills, such as how to seal building cracks and apply insulation.

Back in 2009, as the country was in the thick of an economic calamity, President Barack Obama pumped $5 billion into the Weatherization Assistance Program to help mostly low-income families improve their homes' energy efficiency. New York's program, which receives funding from the U.S. departments of Energy, and Health and Human Services, spent $65.8 million this year to help households throughout the state weatherize their homes for maximum energy efficiency. And last week, Gov. Andrew Cuomo signed a bill that should create more green jobs by allowing homeowners to finance energy enhancement through their utility bills.

With unemployment seemingly stuck at more than 9 percent nationally, the green jobs sector could provide a rare bright spot. Government has tried to give it a boost. And with New York City home to approximately 900,000 buildings, it would seem to offer plenty of opportunity for New Yorkers to get work in the weatherization field, while simultaneously helping the city reduce its carbon footprint.

Those in the weatherization industry, though, say the private sector still has not caught up with the opportunities produced as a result of state and city policy. Meanwhile, the recent deficit reduction compromise and other budget cuts threaten government funded energy and job programs, leading some to question when environmentally friendly jobs will fulfill their promise.

Obama has frequently said that investments in the "green economy" -- services and industries that produce or use renewable materials -- will help revitalize the country's overall economy. During the recession and the slow recovery, the green jobs sector has created crucial employment opportunities in areas such as recycling, clean energy production and manufacturing and deployment of green cleaning products. In New York, federal and state funding for the weatherization program provides jobs for people who might otherwise be out of work and helping lower-income people save money on heating and cooling their homes.

It has also helped create work for people who find it particularly difficult to find jobs â€“ those who have been in prison.

John Valverde, director of the Green Career Center at the Osborne Association, said his organization helps the formerly incarcerated reenter the workforce as productive citizens. It runs a weatherization program, sending participants to Solar One and the Association for Energy Affordability -- both nonprofits -- for green training.

"We realized that with energy efficiency benchmarking and upgrades stipulated by the Greener, Greater Buildings Plan, we could design a training program to match the basic carpentry and electrical training the formerly incarcerated learn in correctional facilities, thereby providing skills participants could learn quickly rather than over four years in college," Valverde said.

Ismail Ocasio, manager of training development at Solar One in Long Island City, said that trainees are taught building science theory to help them understand buildings' energy flow. They then learn the hard skills, such as how to electrically retrofit a building, air seal cracks and apply cellulose (recycled newspaper) into walls.

The Fortune Society, which also works with former prisoners, said it increasingly emphasizes skills such as weatherization to reflect changes in the job market. "We've offered training for jobs in the social services sector, but we want to build out a 'hard skills' model so that our participants can find jobs in the growing green sector," said Stanley Richards, senior vice president of program.

Into Crawlspaces and Attics

The term "green jobs" tends to summon up images of a technician attending to a gently turning wind turbine in a sprawling green field under a deep blue sky. But the reality is not quite so picturesque.

"Weatherization work is not sexy work," said Valverde of the Osborne Association. "The graduates from our green training programs have to work in the heat and cold in crawlspaces, basements and attics caulking windows and insulating."

Nelson Cordova, who was imprisoned for 14 years, graduated from Osborne's weatherization training program. He earns about $20 per hour working in Yonkers, commuting two hours each day to and from Brooklyn.

"It's hard work, especially in the heat wearing a Tyvek suit to protect me from grime and dirt," said Cordova. But he said he feels good when he helps low-income elderly homeowners save money on their energy bills. “I'm just so happy I'm making a living after prison," he said.

Valverde said he thinks the program will pay numerous dividends. "Many of our candidates come from high crime areas in the Bronx, Brooklyn and Poughkeepsie" that, he said, are also "subject to environmental injustices such as toxic landfills and toxic emissions from heavy truck usage. The promise of weatherization work and green jobs is that they provide the mechanism to produce leaders in the community so that they give back to rather than harm the community, and at the same time do work that’s positive for the environment."

Osborne has graduated about 200 students from its weatherization-training program since March 2010. According to Valverde, the organization has a 58 percent job placement rate thanks to a network of contractors.

Osborne offers a wage subsidy to help persuade private contractors to hire the graduates, paying 75 percent of the graduate's wages for the first three months of work. Valverde said that the incentive has helped to cultivate relationships with contractors, who continue to employ Osborne graduates after the three months.

Where the Jobs Are

Despite these and other efforts, green jobs still account for a small percentage of the work in New York City. As of 2010, research by by Lesley Hirsch, director of the New York City Labor Market Information Service at the CUNY Graduate Center, found, 75,000 "green workers" worked in four industries here: construction trades, building services, professional services and component manufacturing. In every one, the green jobs account for a very small percentage of total employment. For example, Hirsch notes that 137,840 people work in building services, but only 28 percent (37,940) are green workers. But she noted that that number should grow as city legislation sets energy efficiency benchmarks and requires upgrades.

Jobs also should be created when the state's funding becomes available for the Green Jobs-Green New York program to provide homeowners and commercial properties $13,000 and $26,000 in loans for retrofitting.

Her report Sizing the Clean Economy, found that the New York metropolitan area leads all major metro areas in the country in the number of green jobs, with 152,034 as of 2010. Of course, one reason for that is that New York in the nation’s biggest city. Because her team used a broader definition of green jobs than Hirsch did, the city's mass transit system leads the green jobs pack with 60,000 workers out of the total.

For green jobs to really gain a foothold the private sector needs to jump on the weatherization bandwagon. Saha noted the business incubator model that has helped spawned clean energy companies in the city could boost such effort. Two firms -- Rentricity and Sollega, both owe their starts to the NYC Accelerator for a Clean and Renewable Economy housed at Polytechnic University.

The role of the private sector could be particularly vital in the light of federal spending cuts and tight state and local budgets.

Obama wanted $320 million for the Weatherization Assistance Program. The House Energy and Water Appropriations Subcommittee wants to drastically reduce the budget to only $33 million, according to Rebecca Stewart, projects coordinator for the National Association for State Community Services, which helps states reduce poverty.

Stewart noted that the national weatherization program may well go belly-up if the cuts make it through the Senate. "This year's funding is $174.3 million, but the combination of losing ARRA [American Recovery and Reinvestment Act] funding come March 31, 2012 and a 2012 budget of $33 million would effectively dismantle the program," she said.

Meanwhile a few green businesses are starting to expand â€“ and create jobs for people who might otherwise not have work.

Gary Grecco, owner of EnergyPro Insulation in Staten Island, said since he started doing weatherization work three years ago business has grown 20 percent annually. He participates in the Enhanced Home Sealing Incentives Program offered by the National Grid, which pays homeowners for the cost of completing an energy audit of their homes done by a private contractor.

Greco has yet to hire someone who is formerly incarcerated and has graduated from a workforce development training program, but said he would consider it in certain circumstances. "If I have a job in an affluent section in Staten Island I will not send someone formerly incarcerated because that person may not relate to the homeowner. But I will send that person if the work is in a low-income area," he said.

Jim McDaniel, vice president of operations at Prospect Development and Construction in Brooklyn, said his company already employs four weatherization workers who have received help from the city's Department of Youth and Community Development. As to whether he would hire a former prisoner, McDaniel said he would consider it "as long as the person showed interest and worked hard, because I believe in second chances."