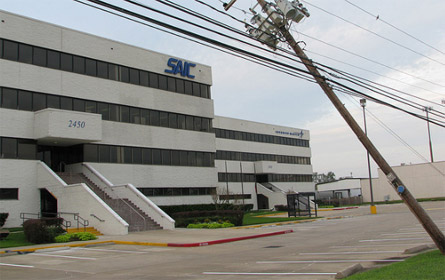 Photo by Kirk Kitell
Science Applications International Corp., or SAIC, the main contractor on the CityTime project, has some 41,000 employees at locations around the world, including this one in Texas. An executive with the company has been charged with taking more than $5 million in kickbacks on the project.

(This article was updated on Thursday afternoon to reflect the mayor's comments.)

The idea that private companies can do much of what government does and do it better and cheaper has taken a battering in New York City over the past few years.

News accounts and prosecutors have detailed mind-boggling cost overruns on the CityTime project. A shadowy company whose owner was having an affair with a top Department of Education official allegedly bilked the department out of millions of dollars. And so on.

Yesterday the City Council stepped into the fray. By a unanimous vote the it passed a bill sponsored by Councilmember Darlene Mealy that would subject city contracts to a kind of cost benefit analysis and require agencies to publicly disclose what services they plan to contract out in the coming year.

Last year, according to the council, the city spent more than $10 billion on private contractors. This amount will go up by about 6 percent this year â€“- far more than the city budget overall. As Gotham Gazette reported this spring, the contract budget has grown by more than 70 percent during the Bloomberg administration. While social service contracts â€“ many with nonprofits â€“ account for the largest chunk of city contracts, the biggest increase has come in professional service contracts, which mushroomed from $357 million in fiscal year 2003 to nearly $1.5 billion projected for this year.

Against this backdrop -- to say nothing of cost overruns and corruption -- that contract budget became a point of contention during last spring's contract talks. City Councilmember Robert Jackson for one repeatedly questioned why the administration was increasing contracts at the same time it was threatening to lay off teachers.

The administration has said it needs specialized outside expertise, and some officials â€“ notably former Deputy Mayor Stephen Goldsmith -â€“ have argued that private contractors can deliver service more cheaply than city workers.

The Costs of Privatization

The council bill -- Intro 624 -- takes direct aim at that contention.

Before a city agency could extend, renew or enter into a contract worth more than $200,000 it would have to analyze whether the contract results from displacement of city workers or would displace city workers. If the study determines some city workers would lose their jobs, the agency must then look at the benefits and costs of contracting out the work and submit that analysis to the city comptroller, who reviews city contracts.

In addition, after receiving bids, the agency would have to analyze the costs and benefits of the contract and tell the council, the comptroller and union officials why the contract makes sense for the city. The council can hold a hearing on the contract in question.

More generally, every year the administration must submit a contracting plan for every city agency. Along with boosting transparency, this provision is seen a possible aid to small and minority contractors who would have more advance warning of upcoming city contracts, giving them time to prepare possible bids.

Announcing the measure, Quinn portrayed it as a money-saving move. While privatizing government work has been seen as a cost-cutting measure, Quinn said in many cases, sending public work to private companies actually increases costs. The bill, he said, "will make sure that we are checking on whether we are saving New Yorkers money every time we consider contracting out."

Council, though, has gone down this path before. In 1990, it passed Local Law 35 requiring similar analyses of contacts. But, as Quinn put it, "the implementation of that law has not lived up to its promise." She noted that in the more than 20 years since, only two costs analyses have been conducted -- two during the Giuliani administration and zero under Bloomberg.

The new version -- 624 -- hopes to close loopholes that enabled the last two mayors to dodge the requirement.

To many New Yorkers the biggest concern about city contracts has been high costs and low performance.

Only last week, the city's special commissioner of investigation for the Department of Education found that Future Technology Associates, a firm the city hired to do computer work on school purchasing, payroll and finance systems, had overcharged the city by at least $6.5 million.

Earlier in September, the New York Times reported that the cost of a contract for a computerized personnel system for the city had increased by more than five fold with the work far from complete.

And then, of course, there is CityTime, the $63 million project whose costs rose to more than $720 million, amid what prosecutors charged was corruption and fraud. Already five people have been indicted in connection with that one.

Asked whether the council bill would help avoid such abuses, Quinn expressed some doubt.

"I hardly imagine that in an analysis you would have a column of estimated criminality involved," she said.

But, she added, the increased disclosure and transparency could help warn city officials of cost overruns and other contract problems.

On to the Mayor

During the disputes over contracts, Mayor Michael Bloomberg has shown no sign of retreating from his reliance on them. And over the past months he has defended some of the most problematic ones. At one point he said the city did a pretty good job" on CityTime. And in response to questions from the Times about the problems with the personnel system known as Nycaps, a mayoral spokesperson said both it and CityTime are now "fully functioning systems used daily by thousands of city employees."

Bloomberg says Wednesday that he opposes the a law passed by the City Council . WNYC's Bob Hennelly reports the mayor says the bill will cripple the city's ability to be more efficient.

"To put impediments to us getting the best deal for the taxpayers particularly during this economy is something we can not tolerate. We are just not going to have this bill," Bloomberg said. "This also is probably unconstitutional."

With the council voting unanimously for the bill, it seems it could easily override any mayoral veto -- the kind of showdown that Quinn has rarely allowed to happen during her tenure. If -- as he implies -- Bloomberg takes the issue to court, it could set the stage for the dispute between the mayor and the council over contracts to drag on for years.