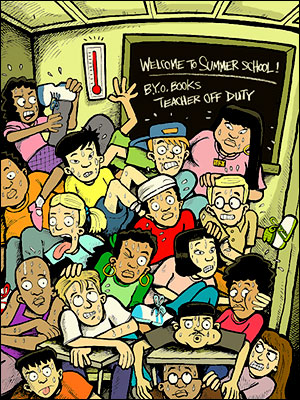 When Maria Rosario's daughter, a first grader in the Bronx, was left back this June, Rosario wanted the girl to get extra help. But the Department of Education was not offering free summer school for first graders. And so Rosario, who receives public assistance, had to pay $220 for private summer school for the girl.

Two years after thousands of New York City parents received automated phone calls from schools Chancellor Harold Levy urging them to make sure their children attended classes in July and August, the Department of Education has apparently lost interest in summer school. About 255,000 students were given the chance to attend summer school this year, down from the Levy era, when more than 300,000 students were allowed to attend. Some 145,000 showed up for July and August classes this year.

Summer school's move to the back burner has had a real cost for the thousands of students who failed to make the grade during the regular school year and who are now either out of summer school or in half-hearted programs. Vincent Caneles, an 11th grader taking summer classes at Kennedy High School in the Bronx, says that in his un-air-conditioned classroom of 60 students, "the heat is unbearable. It's like child abuse."

Teachers such as Adam Bronstein, who has a class of third graders in Washington Heights this summer, say there is a shortage of the necessary books and materials.

Such woes have plagued summer school for years. But this year they have been exacerbated by bureaucratic confusion and budget cuts. The Department of Education has $18 million less than it had last year to educate students during the summer. Most importantly, summer school, like many an educational reform before it, seems to have lost its chic. During his time as chancellor, Levy told New Yorkers that summer school was essential to some students' educational success and key to ending social promotion -- the unofficial policy that moves students up a grade regardless of their academic achievement. Klein, though, has other things on his mind -- most notably instituting a uniform curriculum in the schools.

THE DIFFERENCE A YEAR MAKES

Summer school's popularity has always been linked to notions about promotion, with the pendulum swinging back and forth. Under Chancellor Frank Macchiarola in 1978, New York kicked off "Promotional Gates," a program that required fourth and seventh graders to pass citywide tests in order to be promoted, and mandated summer school for those students who failed the exam.

But after a decade, the Board of Education realized the program was not working: A third of students who were held over were still not able to meet standards at the end of the next year, and children who had been held back were not more likely to meet testing requirements three years later. Instead, according to the Board of Education, they had a greater chance than other children of having social and emotional difficulties.

In 1991, the system instituted "Promotional Success." It put the focus on providing students with extra help during the school year so that they would not have to go to summer school. Summer school enrollment began to ebb.

Another decade and another pendulum swing later, Mayor Rudolph Giuliani and Chancellor Rudy Crew tightened the policy on promotion. They made attendance one of the three promotion criteria, along with standardized tests and classroom performance, and had many students wait until summer to get extra help.

This culminated in 2000 when Levy gave students who did not meet the requirement for promotion the choice of attending summer school -- and doing better -- or repeating their grade.

But Levy could not make summer school live up to its promises. Each year only half of students required to attend summer school showed up for class, and only half of those who did attend passed the end of the summer exams. This, however, did not keep students from being promoted, according to reports by Metis Associates, a consulting firm.

This year, 178,000 students in third through twelfth grades had to attend summer schools if they wanted to be promoted, while another 77,000 struggling students were given the chance to attend on a voluntary basis. But some students who would have been invited to summer school in the past were not able to attend this year. By far the biggest cutback was the elimination of summer programs for kindergarteners, first and second graders, such as Maria Rosario's daughter. No citywide promotion policy exists for the early grades, but districts can choose to keep those students back.

Summer school was left to the old districts, but because the district offices have all but disappeared, each district has one lone liaison overseeing summer school. "No one thought about this -- who was going to run summer school," says Fran Lawler, summer liaison for District 9, who is working out of an elementary school so she can have access to a phone and fax.

Jane Canner, of Classroom Inc., which provides summer curricula for the public schools, says, "If summer school is going to have an effect it has to be carefully thought out and there has to be an energy behind it." But this year, she says, "Regions were not focused on summer school."

There are some indications that Klein will return to the model of Promotional Success and provide struggling students with additional help during the school year.

Kevin Ortiz, a spokesperson for the Department of Education, says that the chancellor is looking to revamp summer school under the direction of Deputy Chancellor Diana Lam, but the hope is to improve instruction during the regular school year so that no one will have to attend summer school. And, in a recent letter to parents, Klein wrote, "Summer school has never been the answer for preparing students to move on to the next level of work."

Jackie Kamin, a member of the Panel on Education Policy, for one would welcome such a change. "Kids are better off getting tutoring during the year," she says.

Whatever changes are made, parents like Robin Brown, chair of the Chancellor's Parent Advisory Council, hope that there will be "some process to see if summer school is effective," a hope certainly shared by students sweating it out in classes across the city.

Julia Kamin is a reporter with Inside Schools, a web site published by Advocates for Children.