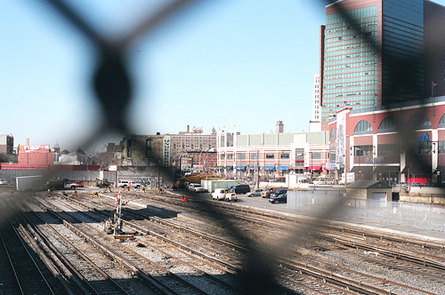 Even though the proposed Atlantic Yards project is not in State Senate District 20, the project is a central issue in this year’s Senate race. The high rises and basketball arena will not be built in the district itself, but they will be a few blocks away.

Anthony Alexis, who served as legislative director for former New York City Councilmember Tracy Boyland, supports the Atlantic Rail Yards project because, he said, it will “support job creation for our community.” But while he supports the plan for high rises and a basketball arena, Alexis is opposed to one of its central aspects: the use of eminent domain. “I don’t support taking people’s homes or property,” Alexis insisted, “There are ways of sitting at the table with the developer and ensuring that the project happens without taking the homes of people.”

Eric Adams, the co-founder of 100 Blacks in Law Enforcement Who Care, has not taken a position on the Atlantic Yards plan. He says he wants to look at the issues of environment, affordable housing and labor before reaching a decision.

Adams and Alexis are competing for the seat being vacated by Carl Andrews, who is running for Congress. As of the July filing deadline, Adams raised more than $86,000; Alexis almost $24,000. Two other candidates â€“ Democrat Guillermo Philpotts and Conservative James Gay â€“ are also running, but neither could be reached for comment and they do not seem to be actively campaigning.

While the Atlantic Yards project has generated the most controversy, it is far from the only issue confronting the ethnically diverse central Brooklyn district.

Central Brooklyn has long suffered disproportionately from various health problems including infant mortality, high HIV/AIDS infection rates, prostate cancer, and diabetes. According to a 2005 article in the Gotham Gazette, “People are hospitalized at a 30 percent higher rate than city residents as a whole, and 30,000 central Brooklyn residents still go without necessary medical care, largely because they do not have health insurance.”

The closing last year of both St. Mary’s Hospital and the Caledonian Division of Brooklyn Hospital in Flatbush have added to the problem. The effect on health care quality of nearby neighborhoods will be examined in a future study.

Adams and Alexis agree that preventive health care is a key to stop increasing health problems. “There are a number of men who have health coverage. But, [they] don’t go out and do their prostate cancer tests. We have to educate and continue to talk to our community ... to utilize the healthcare that we are entitled to,” Alexis said.

But, the candidates also have different legislative priorities with regard to health care.

Many central Brooklyn residents lack health insurance. Running on the Working Families’ Party line, Adams supports the party’s Fair Share for Health Care proposal that calls for large businesses to spend money on employee health benefits. “Every New Yorker should have the right to health care. Too many New Yorkers are using the emergency room as their [source of] primary healthcare,” Adams stated.

Alexis says he also supports the Fair Share for Health Care proposal, but he puts a greater focus on prescription drug costs, arguing that this poses a problem even for those who do have health insurance. “Many of the drug companies have the costs so high, that people leave the state to get affordable [prescription] drugs,” warned Alexis.

Adams would like to see New York “duplicate the system that happens in Massachusetts” where the state buys drugs in bulk and then sells them to the users at a discount rate. A bill enacting such a system was proposed in Albany’s 2006 session but did not pass.

As products of the New York City public education system, Alexis and Adams both call on the state to pay the city the money it is owed under the court ruling in the Campaign for Fiscal Equity lawsuit on funding of schools.

In addition, both Adams and Alexis want to expand after-school programs. Adams would house these programs in churches, closed school buildings and school gyms. “Many children are standing on street corners because they don’t have a building that they can stand in or do something that is productive,” he said.

Alexis would try to get government subsidies to “fund not for profit organizations that provide avenues where children can go, after school and get quality programs.”

With the State Legislature is regularly regarded as an inefficient, out of touch body, Alexis and Adams agree that campaign contributions from special interests groups need to be curtailed. “I personally experienced meeting with party leaders and their sole question was can you raise $100,000 or $200,000. That opens up the opportunity for corruption,” said Alexis.

His experiences at City Council, Alexis said, convinced him that lobbying practices also needs to be examined. “I clearly see that if the local not for profit or local community don’t have somebody up there, who is a so-called high powered lobbyist, they are not going to receive the resources that are due to them,” he said. “We ought to continue looking at that on the state level and make sure that we find ways of preventing that.”

Adams wants to focus on public authorities, agencies created by the government and operated for a public purpose but exempt from many of the rules and review. “Who’s in control of them? No one seems to know,” he said. “It is a way for government to circumvent the budget process, to dump money into agencies, that [aren’t] under control.”