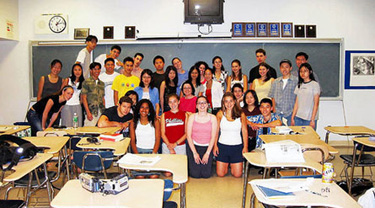 Luis Rosario just completed fifth grade but he already thinks about attending an Ivy League college. And he would seem to be on his way. He won first prize in his district’s fifth grade science fair, scored high on the state math test, gets straight A’s and is fascinated by robotic sciences.

His mother, Judith Pena, wanted to get him into a program to prepare him for one of the city’s specialized high schools. Then she learned about the Columbia Secondary School for Math, Science and Engineering. ”This is even better,” she said. And so, next month Luis Rosario will join the first sixth grade class of Columbia Secondary, a new select school in upper Manhattan.

Columbia Secondary is aimed at top students like Luis, students who one would expect to attend an elite public high school. But over the years the so-called specialized schools have not attracted a large number of gifted black and Hispanic students. In fact, over the past decade, the percentage of students from the city’s large black and Hispanic population who attend these select schools has decreased significantly.

Under the banner “strength in diversity,” Columbia Secondary School for Math, Science and Engineering will try to change that. The school, a partnership of the Department of Education and Columbia University, is aggressively recruiting black and Hispanic students and plans to try out new methods to achieve a more equitable racial balance.

Every fall, eighth graders across all five boroughs compete to gain admission to New York City’s elite select schools, officially known as specialized schools. Admission is based solely on a student’s score on the specialized schools exam. In recent years, the longstanding triumvirateâ€“ Bronx Science, Stuyvesant and Brooklyn Tech â€“ has acquired five newcomers, bringing the total number of select high schools to eight. (The Department of Education considers LaGuardia, an art school, as a specialized school but students are admitted on the basis of auditions, portfolios and their records â€“ and do not take the specialized high school test.) Nevertheless, of the 28,000 students who applied to the freshman classes of these schools in 2006, only some 5,500 got in, and an increasing number of them are white or Asian.

Meanwhile, the percentage of black students at these schools -- never high -- fell between 1994 and 2005. At Bronx Science only five percent of the students are black, at Brooklyn Technical High 15 percent, and at Stuyvesant, the most selective of the schools, only 2 percent of all students are black, according to the city Department of Education.

City officials have repeatedly said they have no explanation for the drop in black enrollment. Some experts blame the reliance on a single test for selecting students and the ability of more affluent parents to hire tutors to prepare their children for that test. Schools Chancellor Joel Klein has resisted any effort to alter the admissions criteria. He has, however, expanded the Specialized High School Institute to help students prepare for it.

Clara Hemphill, former director of Inside Schools and author of New York City’s Best Public High Schools, attributed the decline in black enrollment to the increase in the number of Asian students. Today Asians constitute 56 percent of Stuyvesant’s student body. Given the limited number of seats at the select schools, if enrollment from one group increases substantially, the number of students admitted from other groups must decline.

“There is a culture of test-prep among many Asian families which doesn’t exist (or which exists to a much lesser extent) in black and Hispanic families,” Hemphill wrote in an email. “Some Asian kids start prepping on Saturdays for the test as early as third or fourth grade.” Hemphill added that many of the brightest black and Hispanic students get offers from private schools, leaving fewer top minority students available to attend the elite public schools.

A report released in January by the Coalition for Educational Justice on New York City’s Middle-Grade Schools suggests another factor: “pervasive low achievement in the city’s middle-grade schools, particularly those serving predominantly African-American and Latino students, based on the patterns of low academic expectations and inequitable instructional quality.”

“I honestly feel like kids in low income community schools are not provided with the kinds of resources that prepare them to take the necessary tests to make it into some of the specialized high schools,” wrote Ocynthia Williams of the coalition in an e-mail. “Plenty of resources are provided in elementary and high schools, but by the time they enter junior high (a critical period in their lives in many ways), the system seems to just forget about what is needed for those kids.”

Dona Matthews, director of the Hunter College Center for Gifted Studies and Education who has written widely about gifted education and adolescents, said that gifted programs tend to be predominantly white or Asian, raising questions of cultural identity for the black and Hispanic students in them. “Making it work and making it comfortable and welcoming so they don’t feel they have to choose between being black on the one hand and gifted on the other is important,” Matthews said.

An Elite School in Harlem

Whatever the explanation for the paucity of black and Hispanics in elite schools, the education department hopes the addition of three select schools, including Columbia Secondary, by 2009 will help reach more minority students. “We are definitely positioning these schools in neighborhoods where we hope we can attract the attention of historically underserved populations like blacks and Hispanics,” said Melody Meyer, press secretary for the Department of Education. “It was important for us to have a specialized school in Harlem.” she said, explaining that strong students from northern Manhattan have had to travel to the Bronx, lower Manhattan or Brooklyn to attend a select school.

Location isn’t the only factor that differentiates Columbia Secondary from the other elite high schools. For starters, Columbia Secondary is the only one to begin in grade six, rather than nine. The first sixth-grade class starting in fall 2007 will have 86 students. The school will admit an additional grade each year. In seven years, the school will reach its full capacity of seven grades and 650 to 700 students. In keeping with the general move toward small schools, Columbia Secondary will be significantly smaller than the three original select schools, which have between 2,500 to 4,000 students in grades nine through twelve. 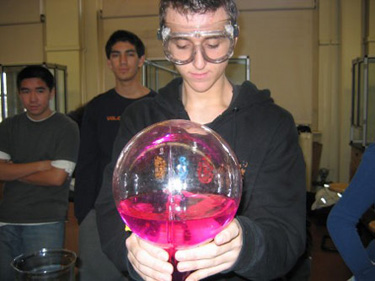 For grades six through eight, Columbia will admit only students who live north of 96th Street, which includes Harlem, Washington Heights and East Harlem, home to large populations of blacks, Dominicans, Puerto Ricans and other Hispanics. For ninth grade and above, Columbia Secondary, like the other select schools, will be open to students throughout the city.

The restricted admissions policy guarantees an applicant pool with large numbers of blacks and Hispanics, said the school’s principal, Dr. Jose Maldonado-Rivera, a native of Puerto Rico and long-time educator. to further guarantee diversity, the school admissions committee selected the students from each of four districts in northern Manhattan.

To spread word about the school, Maldonado-Rivera undertook an extensive recruitment effort last academic year, visiting elementary schools and holding information sessions for parents, students and guidance counselors. More than 800 students from across northern Manhattan applied to the 2007 sixth-grade class. Of these, school officials, based on standardized English language arts and math test scores and fifth grade report cards, selected 227 students to take an essay exam. Only 105 made the final cut when admittance letters went out in the second week of March.

The entering class is 55 percent Hispanic, 15 percent black and 30 percent white and Asian. “I know of no other math/science specialty school that can claim this diversity,” Maldonado-Rivera wrote in an e-mail.

In including grades six through twelve, Columbia Secondary is part of the trend toward combining middle school grades with either elementary schools or high schools. Some educators believe the best way to solve the problem of failing middle schools is to largely eliminate them.

Maldonado-Rivera sees the length of time students could spend at the school as an advantage. “We’re here for seven years as opposed to only three or four,” he said 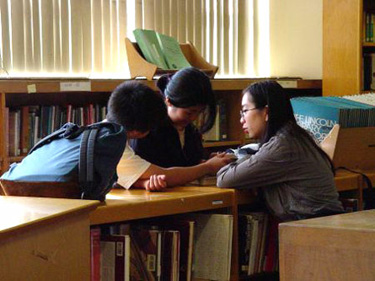 The school will provide a rigorous core curriculum with courses in science, math, engineering, social studies, English and philosophy. Students will be able to take creative arts minicourses and physical fitness electives as well, along with after-school electives like journalism, robotics and webpage and multimedia design. The school will also host field expeditions and a travel abroad program.

As part of the school’s outreach efforts, Maldonado-Rivera wants to initiate a tutoring-buddy system with four elementary schools in the area. This would give Columbia Secondary students, who will be mentored by Columbia engineering undergraduates, the opportunity in turn to mentor local third-grade kids.

“The idea is that the elementary kids of these four schools will start to visualize themselves as future Columbia Secondary students,” said Maldonado-Rivera.

Maldonado-Rivera said the school plans Saturday projects in the community, such as . a cleanup of Morningside Park. In keeping with the school’s emphasis on developing it students’ social and political consciousness, each sixth-grader will participate in a group that will design and carry out a community service projects like measuring water quality or monitoring garbage disposal in the city’s parks.

Looking for a Home

Like most of the new schools the Department of Education has launched in the last few years, Columbia Secondary has experienced startup problems. Relations with the Harlem community got off to a rocky start last fall when the city Department of Education announced plans to temporarily house Columbia Secondary in PS 36, the only K-2 school in the city. The department said this would only be temporary and Columbia would eventually have its own new building.

This did not mollify many in the PS 36 community. Parents and local residents held rallies to protest the decision, which they said the Department of Education made without consulting them. They also expressed concern over 13-year-olds attending school with kindergarteners and first-graders. Eventually their protests convinced the department to withdraw its proposal early this year.

For now the Department of Education has decided to temporarily house the new school on two floors of PS-125 on 123rd Street.

The confusion about location did not faze Barbara Pressman, who thought the school might be a good fit for her son, Matthew. She particularly liked the school’s emphasis on reaching out, being communicative and relating science to the world, which she described as “crossing the science/society barrier.”

Adam Stern, whose son Jackson will enter the sixth grade at Columbia Secondary this fall, said the school almost sounded too good to be true. “The fact that he can be in this school up to college and take classes at Columbia is fantastic,” Stern said. “What more could you ask for?”