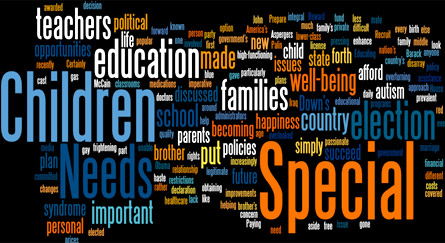 This year's election is a rather important one for me because it is the first time I will be of voting age in an election year. With pressing issues being discussed daily, such as the rising gas prices, the war in Iraq, overturning Roe v. Wade, and gay marriage, the most prevalent topic to me is much more personal and less popular in the media.

My younger brother suffers from high-functioning autism, known as Aspergers, and has struggled in school because of the government's lack of assistance. The most important thing to me in this election is the changes and improvements that will be made to help the families of children with special needs. Words like autism and Down's syndrome can be frightening to some, but these children have the same rights as anyone else and should not be simply cast aside.

My family's happiness and well-being is an integral part of who I am. Witnessing the trials and tribulations my parents and brother have gone through has made me passionate about political policy and the well-being of special needs children throughout the United States. It is imperative the person elected to the White House put forth new policies that enable the government to fund educational opportunities for children in those families who cannot afford a private school.

With the nation's financial status in disarray, it is becoming increasingly difficult for parents to afford the costs of medications and doctors that are not covered by their healthcare plans. Paying for an education that every other child has the option to have for free is simply unattainable. Special needs programs will not suffice if the teachers and administrators involved are not committed to helping these children succeed in both school and life. Becoming a special education teacher is not a decision that should be made in haste, and stricter restrictions should be put on teachers obtaining a license.

I look forward to a future where children with and without special needs are awarded the same opportunities to succeed in life. If new policies are not put forth, my family and the families of special needs children around the country will suffer. To me this election is more than red state or blue state and the declaration of a political party winner; it is a statement of this country's relationship with middle and lower-class families and their children who need a different approach to education.

It seems that John McCain has overlooked the subject of special education in his plan for this country, even though his running mate, Sarah Palin, recently gave birth to a child with Down's syndrome. Barack Obama 's "Recruit, Prepare and Reward Plan" for America's teachers is a legitimate way to enhance the quality of teachers in this country, particularly those in special needs classrooms. Certainly, all issues being discussed in this election are important, but special education is a personal issue for me because of concern for my brother's well-being and future happiness.