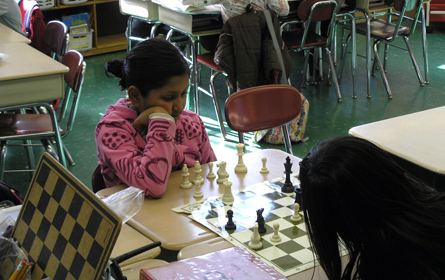 Roberta Zulawski, Sunnyside Community Services
The after-school program at P.S. 150 in Queens is one of 33 that would close under Mayor Michael Bloomberg's preliminary budget.< div>

A sixth-grade student at P.S. 150 in Sunnyside, Queens, Morgan Gelber relies on the after-school program until her parents get off of work. Without it Gelber said, "I'd probably be home alone for at least five hours."

Soon, though, Gelber and the 200 children in P.S. 150's after-school program in Sunnyside, Queens may have to make other arrangements. Under Mayor Michael Bloomberg's preliminary budget, the Department of Youth and Community Development will cut funding for Out-of-School Time, which provides after-school and summer activities for students, by $7.5 million. This would effectively close 33 free after-school programs as well as summer services at 30 middle schools. (For a list of the 33 programs slated to close go here.)

In total, the elimination of the after-school programs will affect roughly 4,000 elementary and middle school students in all five boroughs. Queens will take the biggest hit with 17 closing, followed by Brooklyn with nine.

The preliminary budgetaddresses New York City's $4.9 billion deficit by calling for $1.6 billion of cuts to city agencies. The Department of Youth and Community Development will suffer one of the worst cuts. The mayor will announce the next step -- his executive budget -- on Thursday, which could make additional cuts or restore some programs. The City Council and the mayor must agree on a budget by July. The preliminary budget proposes that the Department of Youth and Community Development cut spending by 25 percent. If passed as is, the department's budget in the 2011 fiscal year will be $289 million, $99.1 million less then in 2010. The cuts could be worse if the state budget slashes $1.3 billion of aid to the city, as expected.

Department spokesman, Ryan Dodge, said the mayor's preliminary budget is likely to change between now and July. "Traditionally money is restored," he said, noting that last year the preliminary budget was $293.2 million, $96.4 million less then the $389.6 million final budget.

Youth and community development selected the 33 elementary and middle school programs it would close based on two criteria: whether the program operates year-round and if it is located in what the department considers a high-need ZIP code.

But some school officials think the agency's calculus is off. "The claim is that we are not a high needs school, but I disagree," said Carmen Parache, principle at P.S. 150. "We have a high population of [English as second language] students, and parents need this stability. They can't afford to pay for after-school programs." Parache wondered why the program at P.S. 199, a school in the same neighborhood was spared.

Theresa Greenberg, an associate executive director of Sunnyside Community Services, which operates after-school programs in three schools, said programs could have been spared if cuts were made across-the-board, instead of focusing all the cuts in just some of the programs. "We would still have a piece of a program if they did that," she said.

A department spokesman, though, said across-the-board cuts would interfere with contractual obligations and "weaken the entire system of 421 programs and impact tens of thousands of children." After the cuts, it is estimated that after-school programs will serve 63,000 students in 2011, but programs could be overcrowded.

Most of the concern over the proposed cuts has come from working parents. Soe Kyi, a nurse at Wyckoff Heights Medical Center, has two sons in the after-school program. "Sometime we work overtime, like 16 hours, and I have nobody to pick them up," she said.

Even parents who have a 9 to 5 job, need some place where for their children, said P.S. 150 program director Mirela Sujak. "Where are they gonna go for those three hours?" she asked.

According to the After-School Alliance, 25 percent of New York's children between kindergarten and 12th grade take care of themselves after-school. Students who would like to participate in an after-school program but cannot often lack transportation, a problem expected to become worse if the Metropolitan Transportation Authority cuts or eliminates student MetroCards.

Parents enrolled in colleges may need to drop out or place themselves on a slower track to a degree. Paola Ruiz, a teaching assistant with a daughter in the fourth grade, said, "When I first enrolled her here, I was going to school myself. It was comforting to know that she was here."

"In the worst cases, parents are going to quit their jobs or not continue their schooling because their kids don't have a safe place to go after-school," said Lucy Friedman, president of The After-School Corp., a non-profit advocacy organization. Friedman said she worries that the cuts will further widen the gap between students whose families can afford after-school programs and those who cannot.

The programs not only provide a safe place for students to go but offer recreational activities, cultural events, homework help and extra attention for students learning English as a second language. "Without after-school, my English wouldn’t be good enough," Lobsang Tsomo said before hiding her tears behind a sheet of paper. Basante Abuelmagt, who emigrated from Egypt, said. "This is my first year here in America, without after-school, I’d be at home getting bad grades."

Dileck Secilmis, a 24-year-old parent who teaches art part-time while attending York College, is one of the 27 staff members at P.S. 150 who help elementary students with homework and teach subjects ranging from dance, sports and karate to chess.

Standing in a classroom decorated with the colorful self-portraits of kindergarteners, Secilmis reads Harold and the Purple Crayon. Finishing the book she hands out purple crayons and asks, "What would you do if you were Harold?"

"I wanted them to use their imagination," she explains.

"We're facing a year where a sacred cow will be slaughtered,” said Brooklyn City Councilmember Lewis Fidler. "On a long list of every bad choice this will be almost the worst."

As chair of the Youth Services Committee, Fidler said he would work to secure funds for after-school programs when the budget comes before the City Council in June. He said, "I’m going to fight to make sure that we don’t destroy our future by hurting our children in the present."