Figuratively shaking his finger due north, Bloomberg released a $62.9 billion budget proposal yesterday that would reduce the city's work force by nearly 11,000 people -- almost 7,000 of them from the Department of Education. The mayor shirked responsibility for the cuts, and instead took out the city's fiscal woes on Albany, which he contends could cut $1.3 billion in aid from the city.

"Make no mistake about it, unless the legislature acts New York City residents will pay the price for Albany's bad decisions," said Bloomberg, before delivering his annual PowerPoint presentation on the city budget. "And I will remind everybody who unfortunately may lose their jobs that it's because of Albany's fiscal irresponsibility for the last dozen years."

The state faces an approximately $9 billion deficit, and the legislature and governor have failed to reach an agreement on any plan to deal with it. The state budget was supposed to be approved by April 1. It is now 36 days late with no agreement in sight.

The state's failure to act, said Bloomberg, clouds the city's fiscal future with so much uncertainty that his administration had no choice but to plan for the worst. The city too faces a $5 billion budget hole, which the administration plans to close through cuts. His plan does not raise taxes.

It does propose to strip thousands of classrooms of teachers and close 20 fire companies and 50 senior centers. The mayor promised to hold the Police Department harmless in light of last week's attempted bombing in Times Square.

Cuts to the Classroom

By far, teachers will bear the brunt of the budget ax.

According to the mayor's budget proposal, about 4,419 teachers could be laid off. Another approximately 2,000 teachers could be lost from attrition. This scenario assumes, the mayor said, the city receives a $493 million cut from state education aid.

According to the Alliance for Quality Education, the State Senate's budget plan would eliminate $466 million from the city Department of Education, while the State Assembly's plan would cut $265 million.

That uncertainty is taking its toll in the classroom, said officials.

"We need to know what's going to be done here," said Schools Chancellor Joel Klein following the mayor's budget proposal yesterday. "There is an entire city of 1.1. million kids and their families who are out on the balance and we need guidance."

"You can't pay people with 'what ifs,'" said Klein.

Klein said the Department of Education would start the layoff process in June to make sure schools were prepared to open in the fall. Both Klein and the mayor would not confirm if the city would rehire teachers should they receive additional funding from Albany or from a federal jobs stimulus package targeting education. Reshuffling the classroom last minute could be disruptive, the mayor said.

In response to the cuts, education and labor advocates did not point their fingers at City Hall. They turned to the capital.

"The budget situation is a little brighter than it was in January," said United Federation of Teachers' President Mike Mulgrew in a statement. "But for the sake of the schools and the kids, the city has to join us in Albany in fighting for the revenues we need to prevent all teacher layoffs."

Officials in Albany don't see it that way. The state has tough choices to make too, New York State Budget Director Robert L. Megna said in a prepared statement.

"Mayor Bloomberg has repeatedly said that the state needs to make hard fiscal choices, and Gov. Paterson's proposed budget reflects exactly those kinds of hard choices," Megna said. "The mayor's budget uses the state as a scapegoat to shirk responsibility for their own budget choices."

It's not just the Department of Education that is getting the ax.

In addition to closing 20 fire companies, the mayor proposed reducing the number of firefighters on 60 engines from five to four. About 68 percent of the city's fire companies already operate with four firefighters. In total, the Fire Department will lose 399 positions. The administration also proposed to start billing for false alarms if they occur at the same location more than three times in a six month period.

From the ladders to the stacks, the administration has proposed to cut the city's library workforce by 740 people. 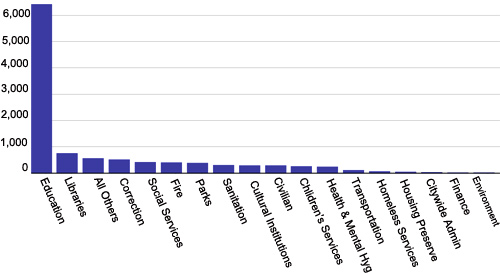 On to the waves: The city hopes to save $300,000 by eliminating the Rockaway Ferry by the end of fiscal year 2010. It will reduce funding for the Queens and Prospect Park zoos, which will likely lead to an admission hike.

Social services, said advocates, have also taken a beating. The administration is still planning to consolidate 16 day care centers, mostly in affluent neighborhoods, and it plans on closing 50 senior centers.

"Once you close a center you can't reopen it," said Bobbie Sackman, the director of public policy at the Council of Senior Centers and Services. "We still think this is premature," Sackman said, urging the mayor to wait to see what Albany will come up with.

Meanwhile, four public pools could close and the swimming season could be reduced by two weeks under the mayor's proposal. Special needs housing for inmates on Rikers Island could also shutter. At the same time, the Department of Correction plans on generating $13.2 million by leasing unused inmate beds to federal agencies.

More than 4,100 after school spots are still on the chopping block, and caseloads at the Administration for Children's Services could increase from 9.5 to 10.9. The administration plans to shutter a drop-in homeless center in Manhattan and could eliminate 90 beds in shelters for homeless single adults.

The Department for Citywide Administrative Services hopes to discontinue the printing of the City Record, publishing it exclusively online, saving $665,000 a year by fiscal year 2012. The proposal would have to be approved in Albany.

If the Mayor's Office of Film, Theatre and Broadcasting has its way, filmmakers would have to pay $300 to get their applications processed, while the Department of Buildings plans on increasing fees for elevator applications.

All of this is subject to City Council approval before July 1. So far, some members aren't taking the proposals quietly.

Just moments before the mayor released his executive budget, several members of the City Council gathered before the City Hall steps to demand action.

The council's new progressive caucus called on the mayor to consider taxing the city's most affluent, including implementing an earnings tax on hedge fund managers and increasing the personal income tax for the wealthiest New Yorkers.

"[The mayor] correctly points out that these are very difficult economic times, that unemployment is still high and that sacrifice is still necessary," said Councilmember Brad Lander. "Unfortunately, he is asking for all of that sacrifice to come from children and families and seniors and students in every neighborhood."

Bloomberg balked at any new tax on Wall Street or on wealthy New Yorkers, saying businesses could move elsewhere and the city would lose much needed revenue.

"At some point you drive them out," the mayor said. "We need jobs. We need people to stay here."

Other advocates and labor leaders hope the city -- and the state -- will turn to tax increases to stave off more layoffs and cuts.

"The city is embarking its way on cutting its way though the worst deficit and the worst fiscal times we've ever lived through," said Sackman. "And there is something fundamentally wrong with that."

Labor interests, like the Working Families Party, are also pushing for a tax on Wall Street bonuses. Billy Easton, the executive director of the Alliance for Quality Education, said a Wall Street banker's bonus tax could bring in between $3.5 to $7 billion in new revenue statewide. That, he said, could save the city's classrooms.