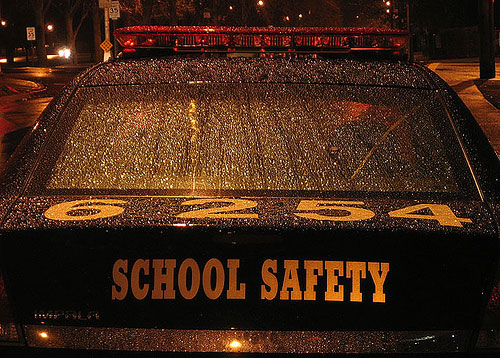 The handcuffs on school safety data have come off, officials said Monday.

For the first time, the Police Department and Department of Education will have to report to the New York City Council on school safety under (Intro 442) legislation approved Monday.

The bill, approved by a vote of 47 to 0, will detail suspensions and arrests by both school safety officers and by police officers. The data will be broken down by race, gender, age and ethnicity and reveal whether the student is an English language learner.

The Department of Education currently reports on school safety to the state, but is not required to detail incidents to the City Council.

"You can go and find a lunch menu," said Councilmember Peter Vallone Jr., a primary sponsor of the bill. "But you can't get a crime report."

Supporters of the legislation said the data would be used to shape school safety policy and determine where disciplinary problems emerge.

"Enforcement of these stipulations may reveal whether patterns are developing that require special intervention or demonstrate clear successes which then could be replicated throughout the system," said Sterling Roberson, vice president of the United Federation of Teachers, in testimony before the City Council last week. "And frankly, more transparency keeps everyone honest on safety and discipline, because we know that often there’s a tendency for emotions and preconceived assumptions to run rampant in place of the facts."

Under the legislation, called the "School Safety Act," data on school suspensions will be broken down by school and reported biannually. The Police Department will report data on arrests, summonses or noncriminal incidents on school grounds quarterly. The crime data will be broken down by the city's eight patrol boroughs. Police will have to detail the nature of the incident, including whether it was a felony, according to the legislation.

School safety agents arrested more than 1,100 students last year, according to New York Civil Liberties Union, and the number of school safety agents has increased by 46 percent under the Bloomberg administration -- from 3,600 to 5,200.

The Department of Education, which supports the legislation, touts its school safety record. A spokesperson said it is more than willing to share it.

"We support the bill and have worked closely with the City Council and the NYPD to draft it," said a Department of Education spokesperson Marge Feinberg on the bill's passage. "We are proud of our record in making our schools safer. Since the 2000/2001 school year, violent crime in schools decreased by 39 percent."

The legislation's approval comes just one week after a teacher miscarried in the Bronx after trying to break up a school fight.

A plethora of school safety advocates support the legislation, including Advocates for Children, Class Size Matters and Teachers Unite.

While acknowledging the bill is a good first step, Roberson said in prepared testimony the city should strengthen its prevention and intervention programs to solve school violence before it starts.

As part of a compromise on the project, which community members and the area council member see as too big, the developer, Extell Development, will provide funding for the West 59th Street Recreation Center and Riverside Park South. Extell will also build a school in the neighborhood.

"We tried to do all that we could," said Ethel Sheffer, chair of the Riverside Center Working Group in Community Board 7. "It’s a very large development, but we certainly improved it enormouslyâ€¦ in terms of bringing it into the community instead of a private enclave."

According to the council, the development is expected to increase the area population by 3 percent.