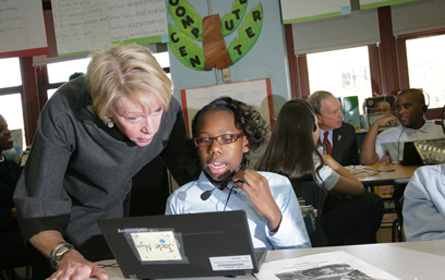 "Is Cathleen Black here?" The pointed, almost scolding voice of Sen. John DeFrancisco rang out across the hearing room in the legislative office building in Albany on Tuesday. DeFrancisco, who was overseeing the joint budget hearing on education for the senate majority, was looking for a copy of the schools chancellor's testimony.

Black made her presence known. "You weren't going to keep it for yourself were you?" DeFrancisco chuckled as she handed in her testimony.

With only two months on the job, Black has weathered a storm of controversy after being appointed by Mayor Michael Bloomberg. Formerly a publishing executive, Black had no experience in education and has made only limited and carefully controlled appearances since taking office at the beginning of January.

Black, who also has little to no experience dealing with organized labor, took her new job as the city's dealings with the teacher's union turned notably contentious. In his State of the City address, Bloomberg pushed for new control over pension negotiations and the elimination of state mandates such as the first-in, last-out rule that means newer teachers must be laid off before teachers with seniority. United Federation of Teachers’ head Michael Mulgrew has taken the mayor's push as an attack on seniority and a move designed to cut costs by getting rid of more highly paid teachers.

Black's testimony on Tuesday before a joint hearing of the notoriously cantankerous legislature was supposed to be her biggest test to date. Instead Black delivered her written testimony and had a basically cordial question and answer session with legislators. But it wasn't all smooth sailing.

As Black took her seat in front of a microphone and a large panel of legislators, the chanting began. At first it was muffled, but the noise of human voices protesting in unison was unmistakable. Most of the audience looked at one another nervously, assuming the protest was directed at Black.

"Wanna take a break?" one legislator asked. "Can we have some order please!" shouted DeFrancisco. The protesters got louder, closer to the floor and to Black. "Gov. Cuomo, don't kill the CFE!" they chanted, demanding the state honor a settlement in the Campaign for Fiscal Equity lawsuit that requires it to provide more aid to under-funded school districts. "You have the wrong room. Gov. Cuomo is on the second floor of the capitol," DeFrancisco said. When the protesters exited the room, Assemblymember Herman "Denny" Farrell told a staffer, "Lock the doors when they leave." But the protest brought a round of applause from legislators and audience members alike.

With that, Black began her testimony. "Thank you for that warm welcome," she said, smiling. Legislators laughed. Black was accompanied by Deputy Mayor Dennis Walcott and the Department of Education's chief financial officer, Veronica Conforme.

"Let me say from the outset that we recognize the state's precarious financial condition. As Mayor Bloomberg said, â€What we are urging you to do is provide our students with their fair share of state aid and our city with the tools and reform needed to end unnecessary mandates and crippling policy that otherwise will accelerate an already daunting situation,'" she said.

Sen. Martin Golden agreed with Black that Cuomo's budget calls for New York City to bear an unfair share of the cuts in state education aid. He asked Black what legislation City Hall plans to put forward to deal with the state mandates the Bloomberg administration says are so burdensome. Black replied that a bill dealing with last in, first out was forthcoming.

She was asked what criteria, other than seniority, could be used for evaluating teachers. "We have a number of plans to have a more formulaic evaluation of teachers," she said. "The current system is only two letters: satisfactory or unsatisfactory. Ninety percent get satisfactory. That number by any stretch of the imagination doesn't fly. At the moment we can't move forward on teacher evaluations in any significant way because that is a contract we have to work out with the union."

"What is your own vision?" he asked Black. "The reason I'm asking the question is, it seems to me you got on the train and just took the driver's seat, and my observation is the train has been going down the wrong track for long time, and my perception is that you have been driving the train in the same direction as your predecessor."

Black's response did not include any criticism of her predecessor and avoided any hot topics.

"I have a very clear vision that our children deserve the best schools that they possibly can have for all of the years they are in school -- to prepare them for a world they are going into, which is more complex than it has been in the past," she added, "I want to do much better job of reaching out to the community in tandem to work together to assure our children a better future."

Perry pressed on. "Do you believe that the policy of routinely closing schools after what seems in a lot of cases deliberate policy by the department to let these schools deteriorate until they are not worth keeping open, do you think that is policy that should be part of your vision?" Perry asked.

"We do not have policy for closing schools," Black promptly responded.

"Excuse me! Did you just say you don't have a policy for closing schools?" Perry asked in disbelief.

"We have a very strong belief we should phase out failing schools," Black continued. Perry tried to interject but Black continued. "We visit schools not once, but multiple times," she said, explaining how students, principals and teachers were evaluated in failing schools." Walcott then added to what Black said, insisting that the city works in tandem with the state to identify poorly performing schools.

Perhaps the most pointed questions came from Sen. Andrew Lanza on the topic of last in, first out.

"What is the anticipated cost savings if we were to move away from the LIFO system or process?" asked Lanza.

"I don’t have an exact number on that but with this kind of budget shortfall it’s going to be a significant number," said Black.

Walcott quickly interjected, "We don’t view this as a cost saving measure. We view this as an issue of how to provide the best teachers for schools during a very difficult time around layoffs."

"Well, this is a budget hearing," said Lanza, "and the issue of changing LIFO has been advanced in the context of saving the city a lot of money. So I am trying to get an accurate picture as to what the expectation is. Why is it the city's expectation that so many experienced teachers would be let go?"

Black seemingly missed the point of the question -- whether intentionally or not . Black said that she expected teacher layoffs in general would be necessary because of Cuomo's proposed budget cuts.

Visibly frustrated, Lanza responded: "I’ll tell you my concern is that this is being driven by cost savings, because this is being advanced as a cost savings measure for the city. Would you agree all else being equal experience matters?"

Black told the story of meeting a "fantastic teacher" and finding out that she only had a year of experience.

Lanza still didn't have the answer he was looking for. "We can agree to disagree," he said.

But he had one more question -- this time about pensions. Lanza noted the teacher had agreed to a new -- and lower -- tier for new teachers in 2009. "Are we saying that we need to move beyond that? That that's not going to work?" he asked the chancellor.

"The deputy mayor may want to add to that," Black responded, quickly handing the question off to Walcott.

More questions came and went, about building funds, closing the achievement gap, class size, using e-readers in the classroom. Some legislators were anxious to talk about their experiences as a teachers. Others seemed pleasantly surprised that Black was talking about the Campaign for Fiscal Equity lawsuit and reducing state cuts to city education aid.

Assemblymember Daniel O'Donnell seemed almost incensed when he asked Black if she agreed with a recent "tabloid editorial" that said this was the wrong time to make good on the CFE lawsuit. He appeared relieved when Black said she did not agree with the editorial and thought an injustice was being done by not funding it.

So what did legislators think of Black's performance?

"She's only been in for less than a month. I think she did a good job. I would give her a B pus," said Sen. Ruben Diaz. But Diaz added he wasn't particularly concerned with who serves as chancellor. "It is the mayor's way. It is his agenda. No one else matters. This is the same administration-- it has nothing to do with the chancellor.

Sen. Liz Krueger said she thinks that the teachers union, Black and Bloomberg all agree that the city is bearing an unfair share of education cuts -- whether the union and the administraiton are getting along or not. She said she has disagreed with past legislation that would do away with protections for senior teachers, but thinks there may be some sort of formula that takes more than just seniority into account. That said, she added, "I don't think it is an appropriate budget discussion," because it should not be about cost savings

As for Black's performance, Krueger thought she did well but that she wasn't facing much of a firing squad this time. "She gave her answers, and sometimes referred to the deputy mayor. When she didn't have the answer she was reasonable and said she would get back to us on that. It was a civil Q and A. I don't think it could have been harder than having 3,000 angry people screaming at you," Krueger said.

Later Black told the press she prepared for weeks for the testimony.