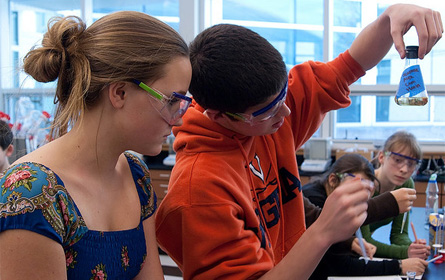 With Google having purchased property in Chelsea for almost $2 billion and Internet Week New York looking to its fourth year, city officials hope the technology and bioscience industries will continue to expand here, bringing new job opportunities with them. But will graduates of the city’s public schools have the skills to get those jobs?

Results of a new national science test released late last month, along with a steep decline in the number of students qualifying for a prestigious science award and testimony from teachers indicates that even if new, high-tech jobs come to New York City, the positions may not go to people who attended the city's schools.

Earlier this month Patrick Sullivan, the Manhattan borough president's appointee to the Panel for Educational Policy, asked schools Chancellor Cathie Black about what Sullivan described as " the continued decline in science education under the mayor's watch." According to Sullivan, Black said she would look into the issue.

The National Assessment of Educational Progress, or NAEP, recently released results for the fourth and eighth grade students from 17 urban districts, including New York City who took a national science test in 2009. Also referred to as the Nation’s Report Card, NAEP, a product of the National Center for Education Statistics, serves as a barometer for national student performance. Fourth graders in 14 of the 17 city districts and eighth graders in all but one of the districts scored lower than the national average of 149 on a scale of 0 to 300. New York City's fourth and eighth grade students scored below the national average, at 135 and 129, respectively. That puts the city's fourth graders in the middle of the urban districts; the eight graders lagged behind those in many other city schools systems.

In all types of districts across the country, a large percentage of the nation’s fourth, eighth and twelfth graders did not reach the level of proficient on the NAEP tests. The 2009 results for the 17 urban districts "are worse, not better," said Alan Friedman, former director of the New York Hall of Science who explained the results in a National Center for Education Statistics webcast.

"Urban districts in general performed less well in math and reading compared to the nation as a whole, while performing even further below in science," Friedman said.

New York's Department of Education has said not all cities considered "urban districts" face the same challenges that New York does. "While our kids have a long way to go, right now we're outperforming districts with much lower levels of poverty," said the department's chief academic officer, Shael Polokow-Suransky, in a statement.

And the department has noted that New York fourth graders eligible for free or reduced-price lunch -- a poverty indicator --outperformed similar students in other large cities, and that New York fared better than other cities with similar poverty rates, such as Chicago and Los Angeles.

The department, though, also has expressed some dismay about the scores. "The gap between how our students perform in elementary and middle school is a real concern," Polokow-Suransky said.

A Lack of Talent?

While the students taking the NAEP represent a sample of city students, some observers also see a falloff in achievement among the city's best science students. This year, for the first time in recent memory, no city school student, public or private, reached the final round of the prestigious national Intel Science Talent Search. Only 14 students were among the 200 semifinalists, according to Steve Koss, who has written extensively on the issue.

For decades, city school students dominated the competition, but Koss writes, "Since 2002-2003 ... NYC schools' participation in STS has dropped by nearly half, and the level of semifinalist winners by nearly three fourths."

In his post on NYC Public School Parents, Koss links the decline to the advent of mayoral control of schools. He offers a number of possible explanations, including that the emphasis on math and reading tests have minimized or "dumbed down" science instruction.

The city science curriculum, according to the Department of Education website begins with a hands-on approach for elementary school students. At the high school level, students are required to complete three years of life or physical science, as well as 1,200 minutes of lab time to qualify for a Regents diploma.

Based on discussions with several New York City teachers that may not be working. (The teachers asked to remain anonymous.)

One teacher in a public high school with a business focus who has taught biology for 10 years said that the majority of students entering her classroom have not been "well prepped" for high school science. More importantly, the students lack basic skills, she said. For example, students had difficulty answering review questions because they didn’t understand words such as "predict" or "sequence." To address this, the teacher has enrolled in a class to help her teach reading to her students.

Another teacher said her students have difficulty using a ruler because they’re not familiar with the measurements.

Other educators echo such concerns. A professor at LaGuardia Community College recently told the New York Times that his students -- people who have graduated from high school -- "have serious challenges remembering the basic rules of arithmetic.”

To try to bolster science education, the city has begun introducing state standards, called Common Core. Among other things, these would have students analyze academic, non-fiction texts, including science texts, similar to those they might encounter in college.

The NAEP scores, Polokow-Suransky said in his statement, point up the importance of "working toward the tougher Common Core Standards as quickly as possible." The standards, he continued, will "build literacy skills in science ... and prepare our kids for the critical thinking and problem solving they begin to face in middle school."

The high school teachers also expressed frustration over the lack of lab time. Student are supposed to have 44 minutes of lab a week "but they aren't experimenting the whole time because time has to be allotted for setup, explaining the lab instructions because students have difficulty comprehending them, and then clean-up,” said one of the teachers.

She thinks students would need a minimum of 90 minutes per week to see the results of and have the opportunity to change their experiments.

The education department says it is in the midst of what it describes as "a multi-million dollar effort ... to improve the quality and quantity of science laboratory facilities." But while many schools have added new science labs, a recent report on NY1 found that they don’t have teachers for them, making it hard to boost time spent on hands-on experiments.

The department admits that it has had shortages of science teachers but says it has tried to fill science-teaching positions and, in the last three years, hired more than 500 new middle school science teachers. Impending teacher layoffs, though, could bring a halt to those gains and even erase some of them.

Whatever the school day may lack in science education, some city students try to make up for it after hours. The Department of Youth and Community Development's Beacon Program offers an opportunity for several hundred students to build and program robots. Enthusiastic science graduate and post-doctoral students teach the elementary and high school students, according to Darryl Rattray, the Beacon Program’s assistant commissioner.

This program, though, could also be vulnerable to budget cuts. In testimony before the state legislature, city youth commissioner Jeanne Mullgrav said that Gov. Andrew Cuomo's 2011-2012 budget proposal could result "in the loss of 4,800 afterschool slots" out of an afterschool population of approximately 80,000 students.

As exciting as building a robot is, the afterschool program does not guarantee that students will learn the essential concepts required to excel in physical, life and earth and space sciences or boost their test scores. Meghan Groome, the director of K-12 science education for the New York Academy of Sciences who is responsible for recruiting graduate students to teach in afterschool programs, said the "program's mission is to engage and interest students in the sciences, not to ready them for test taking."