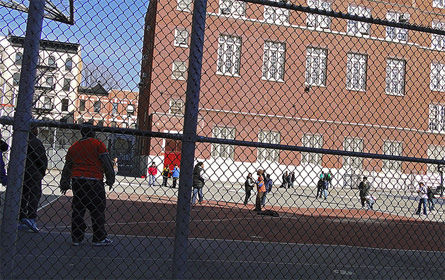 Earlier this school year, a 9-year-old at a Manhattan school asked a girl during lunch if she would share her candy with him. Her friends reported him to a safety officer, complaining that he had approached their table aggressively.

The boy faced a 90-day suspension for assault and harassment. Although the suspension was ultimately dismissed, the experience may have a lasting emotional impact.

"He was terrified the whole time. He was ready to cry,” said Ana Estada, an advocate for Advocates for Children, who represented the child in his suspension hearing.

The case, though, is hardly isolated. Suspensions of elementary school students, ages 4 to 10, are up by 76 percent in New York City over the past decade, with 6,119 suspensions during the 2008-2009 school year compared to 3,469 throughout the 2002-2003 academic year, the Daily News reported recently.

Overall, the Department of Education has increased student suspensions by 66 percent over the past 10 years, according to a recent New York Civil Liberties Union report. One in 14 current public school students have been suspended, compared to one in 25 students 10 years ago.

Black children, who account for one-third of city public school students, have served 53 percent of suspensions over the past decade.

Critics argue that students are being punished too harshly instead of receiving counseling and social services to address their problems. But the Department of Education believes suspending disruptive students is necessary to keep schools secure.

Marge Feinberg, a department spokeswoman, credits the increased suspension rate with a drop in violent crimes throughout city schools. "Preserving a safe and orderly environment in our schools is critical to our student's academic success," she wrote in an e-mail.

Though the department defends the policy, it has also started to look at alternatives.

Behind the Suspension Surge

Estada attributes the increase in suspensions over the past decade to the department's pressuring of teachers to file discipline reports to principals. The principal then decides whether to suspend the student.

When children tell parents about unresolved behavior problems "parents feel like their schools aren't safe," said Estada. "The principals say, 'I have to create a safe environment.' It's the only way to justify the suspension."

The majority of the suspensions are principal's suspensions, which last one to five days and target low-level offenses, such as insubordination and abusive language.

Both types of suspensions have been on the rise since Bloomberg took control of the city's school system.

Certain infractions, such as aggressive violence, gang-related activity and bringing a weapon to school, automatically lead to suspension. Last year the Department of Education reduced the number of so-called zero tolerance policy offenses to 21, down from 29 in 2007. Seven offenses met the criteria in 1998.

"A suspension should never be the sole or only form of punishment," Ofer said. "Zero tolerance as a policy completes undermines the authority of teachers and principals."

Ofer criticizes suspension as a temporary solution that only succeeds in physically removing the child from the school and creating a tense environment between students and the administration. The Civil Liberties Union would like to see principals rely more on mediation and counseling when dealing with troublesome students.

"They need to create a positive school environment that fosters communication between students and pedagogical staff," he said.

While the Department of Education has not decided if it will further lower the number of zero tolerance infractions, it is exploring other approaches to discipline.

"This year, we expanded the disciplinary options principals have, including having a parent conference or in-school disciplinary action for certain infractions such as fighting," wrote Feinberg via e-mail. "The DOE is committed to providing a safe and nurturing school environment with a dedicated staff of employees.”

But some experts believe the department must do more to improve student behavior in the long-term.

"If you attend a school where you are treated poorly and even for a minor infraction you might be suspended, students feel disengaged," said Damon Hewitt, director of the National Association for the Advancement of Colored People Legal Defense and Education Fund's education practice.

He called the disproportionate number of black students being suspended "outrageous and highly disturbing."

The Department of Education, disputes his claim. "Race is not a factor in suspension decisions," Feinberg wrote via e-mail.

Nevertheless, Hewitt recommends that principals have less disciplinary authority. He also believes the vague nature of minor infractions, such as disrespect, gives Police Department safety officers who work in schools broad discretion to punish black students in a harsher manner. "It's in the eye of the beholder," he said.

Hewitt thinks the Department of Education must decrease its Police Department presence in schools in order to improve student relations, foster communication and promote trust.

In December, the City Councilapproved legislation, now signed into law, that requires the Department of Education and Police Department to disclose school safety data, including figures on suspensions. The Legal Defense Fund plans on evaluating data, when it becomes available, that will track suspension trends in specific schools.

"The data will reveal differences amongst the schools," Hewitt said, commenting that he hoped "the data will spur improved practices."

Problems in the Process

During suspension hearings, held only for superintendent's suspensions, a single official decides whether the student will be punished and, if so, for how long. The Department of Education and the defendant have the opportunity to present facts and call witnesses. Suspension hearings are held within five days of the school’s decision to impose the punishment. Decisions are usually made within three days of the hearing.

"It’s like a mini-criminal trial," said Nelson Mar, an educational law specialist and senior staff attorney for Bronx Legal Services. "Students don’t learn much about how not to get in trouble again."

"A lot of times we don't see an investigation really happening. It's cursory," he said. Parents must make a formal request to the school if they want to view witness statements. But Mar claims the Department of Education does not provide his clients with that information, leaving him "with very limited knowledge of what happened."

According to Mar, most students enter the hearing without a lawyer, are represented by their parents or plead no contest to the charges. Parents often work full-time and plead no contest for their children because they are too busy to attend the hearing.

"Our goal is to protect a student from a long-term suspension, or avoid one altogether if we believe it's inappropriate or the facts don't necessitate such a response," he said. "Sometimes the charges are specific, sometimes they are vague."

One third of his clients avoid suspension entirely. "The greater good is that we wind up getting the suspension reduced," he said.

He described his typical client as an upset student who had an argument with a teacher and made physical contact with the instructor when attempting to leave the classroom. Sometimes teachers file reports to the principal, categorizing what may have been a light shove as an aggressive assault.

"The standard of proof is very, very minimal. You could bring two or three witnesses that say otherwise, but that one other [Department of Education] witness is enough to make the punishment," Mar said.