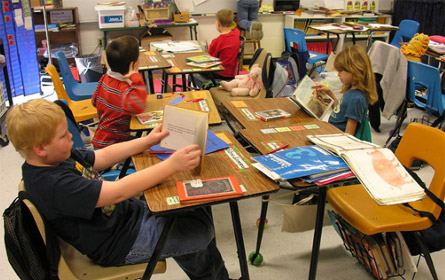 The Obama administration's Race to the Top contest set states and school districts around the country scrambling for ways to reorganize, restructure or reinvent themselves in order to qualify for federal aid aimed at reconstituting school systems in the image of Mayor Michael Bloomberg's educational reforms. Nearly all the carrots dangled by the federal Department of Education, as in New York, reward reforms related to standardized testing (merit pay, grade retention, school shutdowns) or to changes in school governance (mayoral control, school "restarts," school turnarounds, charter schools).

An August New York Times poll found that only 34 percent of New Yorkers approve of the mayor's handling of the schools. That has not stopped city schools Chancellor Dennis Walcott from announcing that he will "re-task" dollars to underwrite a new round of Race to the Top-style reforms. Focusing now on middle schools, the DOE will follow its strategy for high schools: shut down struggling schools and replace them.

If the federal or city department of education really wanted to turn around struggling schools, however, they would do far better to focus not on merit pay or governance structures, but on the struggling students inside those schools â€“ in particular the four out of ten children who struggle with learning to read. In doing so, they would also find one of the major roots of the achievement gap. Proportions of struggling readers are the same in Scarsdale as in Harlem, in Oakland as in Marin County.What makes reading disabilities a root cause of the achievement gap between rich and poor districts are not governance structures, but whether or not struggling readers get appropriate help, and when.

In keeping with the "reading wars" of the past 40 years, deliberations about the best way to help struggling readers still focus too much on phonics versus whole language reading instruction. The discussion needs to move way beyond those polarities, however, if we are ever to ensure that each child in this country is truly reading. Full literacy cannot be guaranteed by ordering up the right phonics program from the right publisher, stocking classrooms with "leveled libraries," sitting every schoolchild down for 90 minutes every day for reading and writing "literacy blocks" and then testing them relentlessly, or even by having their parents read nightly to them from birth.

These strategies cannot help those four out of ten students who struggle to read. For one thing, of those 40percent of students, half -- fully 20 percent of our population â€“ are dyslexic, according to the International Dyslexia Association and the National Institute of Child Health and Development (NICHD.)

If 40 percent of children struggle with learning to read, and there are 1.1 million schoolchildren in the city's public schools, that amounts to 440,000 children. Half of those â€“ or some 220,000 â€“ are dyslexic.

In a jarring overlap of figures, that happens to be the same number of children Bloomberg cited as being in failing schools when he first took control of the public school system in 2002. Not all children in failing schools are dyslexic, of course; nor are all dyslexics in failing schools. The overlap in numbers, though, serves as a wake-up call. When the additional 20 percent of struggling readers are factored in, we are talking about close to half the children of any given school system or district who need extra help learning to read.

Most dyslexics in New York are not found in special ed. In fact, most are not found at all. Historically, to determine whether a child needs help with reading, special ed looked for a discrepancy between I.Q. and achievement level. Perversely, this assumed that reading problems would affect only high I.Q. children with low levels of achievement. However, people at any level of intelligence can have reading difficulties. This dilemma was forcefully addressed in a 2003 report by Kalman R. Hettleman titled "The Invisible Dyslexics"

In 2004 the reauthorization of the Individuals with Disabilities Education Act scrapped the discrepancy model for learning disabilities with one that calls for Response to Intervention. This was based on the NICHD's recommendation that schools offer increasing levels of specialized, multi-sensory interventions to struggling readers until; they find the one that works for that particular child. These interventions can range in intensity from small-group instruction a few times a week with the regular classroom teacher, to full-time, one-on-one programs of four to eight weeks with specially-trained instructors. The Institute recommended that these interventions be tried before referring a student to special ed.

This reform has unleashed a further complication: schools or districts first direct families to whatever resources they offer to help with reading but do not necessarily provide what the struggling students actually need. In New York City, for example, principals are allowed to choose whatever services they want to offer. They usually pick one program, and if that one doesn't happen to work for every struggling reader -- which it surely won't and can't) -- many students will continue to struggle.

In her excellent book Why Can't You Teach Me 2 Read, WNYC education reporter Beth Fertig describes a typical scenario in which two schools are located in the same building. The principal of one selects a program that helps struggling readers, and the other chooses one that is not effective. Students in the second school have no access to the successful program in the first. Under the city's policy of "principal empowerment," unimproved reading scores of the second school's principal would ultimately result in his/her removal. But that could take years. Meanwhile a whole cohort of struggling readers will have passed through that school.

In short, the progression of ever-more-intensive interventions envisioned by the federal government for these children is not available in New York City, where full implementation of the Response to Intervention protocol is still two years away. Instead, parents have to doggedly extract these services from the Department of Education, often with a lawsuit. Even that usually comes at the end of a long, grueling road; for most parents, it can take a long time for them to find out why their children are struggling, much less what kind of help to ask for and how to get it.

What happens to struggling readers who don't get help? They are left in classrooms at every grade level with their bad spelling, illegible handwriting or uncertain reading skills to get by as best they can. Unsuspecting parents might exhort them to "work harder," or criticize them for "not focusing." Teachers often ascribe their reading or comprehension problems to laziness or lack of intelligence.

These children often develop strategies or subterfuges to help them get by in the classroom. Without the right interventions, though, many of these "invisible" dyslexics must repeat grades, sometimes multiple times. Little that is provided in the classroom, summer school or after-school tutoring programs for these students is going to help. Those programs simply provide more intensive or individualized versions of classroom instruction that has already not worked.

That is why the city Department of Education' practice of treating every reading and writing deficiency with even more reading and writing (much less endless testing of them!) is counter-productive. Such "hyper-literacy" leads, as one parent noted, "frustration for those who are not really reading, and tedium for those who are already fluent readers."

The hyper-focus on math and literacy in recent years has, moreover, crowded out social studies, science, the arts, and even physical education, which all offer plenty of opportunity for developing literacy and math skills, as well as ways to engage more f students, especially those for whom reading and writing do not come easily.

No Child Left Behind

Can all of these children be helped? Yes, and at every grade level. It is unacceptable to keep writing off generations of students if they are not reading adequately by third grade, as has been the case for too long. It is also unacceptable that the task of finding and sorting through the available reading interventions is left to the vigilance of parents, leaving out those who cannot marshal the time, money, tenacity and emotional resources to ferret out such programs. Many of these interventions are used in school systems in other parts of the country. The fact that they are not available everywhere -- including New York -- is really more a matter of politics or ignorance than of anything else. Where they are not widely available, the students who get such help are largely those whose parents have successfully sued for it, or who pay for it privately â€“ further evidence of the role this reading crisis plays in the achievement gap.

With so much research, so many solutions, and even federal dollars at hand, legislators and education officials have the opportunity and obligation to move decisively into the 21st century by first guaranteeing that the nation's schoolchildren have that most basic of skills: the ability to read. After all, if compulsory education forces children to attend school, shouldn't we guarantee that they are able to participate in what we are compelling them to do?

Discussion of solutions in education inevitably brings up that other major mathematical calculation: the cost. When it comes to literacy, consider that whether we spend the actual dollars or not, we pay -- either for a fully literate population or the societal costs of not having one.

Mayor Bloomberg is effectively recognizing the costs of illiteracy through his newly-established Young Men's Initiative. In short order, Deputy Mayor of Health and Human Services Linda Gibbs, who is overseeing the program, found that many of the young men, who are no longer in the city's schools, but not in jobs either, were reading at elementary school levels. To that end, she has made improved reading skills the Initiative's first order of business. Now, if we could just get the city's school system to do the same! As the mayor himself said, in announcing expansion of the Young Adult Literacy Program to help the Initiative's young men improve their reading "Too many young men in our city are stuck in dead ends, and for many of them, the problem starts and stops with illiteracy. But here's the good news: this is a problem that can be overcome."

It can but the effort will need some serious "scaling up," of course. The city's Young Adult Literacy Program serves 1,000 struggling "over-age" readers in 17 locations. As we've seen, struggling readers in the schools number nearly a half-million, spread across some 1,500 schools. If our school reform money and energies were "re-tasked," however, from the ever-expanding focus on standardized testing and governance restructurings, and redirected to provide appropriate reading interventions for every child who needs it, overall total costs could well be no more than what is being spent right now. The only difference is that those four out of ten children in our schools who need that extra help would then truly be reading.

Susan Crawford is the director of the Right to Read Project