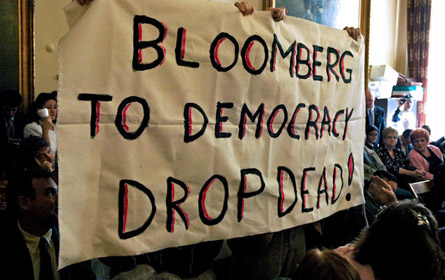 Photo from jameswagner.com
Oct. 17, 2009 protest by the Radical Homosexual Agenda
against Bloomberg's revision of term limits

This is one in a series, to run between now and Election Day, examining Mayor Michael Bloomberg's record in key areas. For more on the mayor's eight years see:

Much has changed in the eight years since Michael Bloomberg made his first run for mayor of New York City as a successful businessman lacking a political resume. He has changed from the Republican Party to a registered independent. He has flirted with a presidential run. His estimated net worth has tripled, making him in not only the man who runs the city, but also the man in it with the most money. In the process, he has given himself a shot at a third term, by extending term limits from two terms to three.

Bloomberg's wealth has ensured a number of truths. He has almost unlimited resources—for advertising, philanthropy and campaign expenses. This helped him gain the widest margin of victory ever for a Republican mayor in New York City in 2005, despite not participating in one of the mayoral debates and, in some people's eyes, circumventing the rules. Yet, these same financial resources eliminate any need for Bloomberg to seek campaign contributions, making him less subject to the system of favors that can influence politics. This then raises the question: Is Bloomberg above politics, or just another player who happens to carry a bit more weight?

Beyond term limits, the mayor has confronted a number of issues involving how government operates that venture into the gray area between policy and politics. His administration has tackled some full force, while others have seen less progress. Most observers thinks transparency, for instance, has greatly increased. At the same time, the record on reform of the election system and a variety of ethics issues has been mixed.

Last month, Bloomberg announced plans to bring changes to an election system that many say is in dire need of change. His "Easy to Vote & Easy to Run" initiative, released on September 10, puts forth an array of reforms to improve a system that Bloomberg himself has called "antiquated."

The plan proposes an assortment of ideas to improve the system. It includes the creation of a "Democracy Index" that will assess the overall effectiveness of the voting process by measuring factors such as how long voters wait in line. The city's non-emergency 311 line would become the voting hotline as well, allowing residents to get information on polling locations, absentee ballots and more. In the plan, Bloomberg also supports certain federal initiatives, such as an automatic registration of eligible voters.

The voting plan leaves some unimpressed.

This is all very nice stuff," said Susan Lerner, director of good government group Common Cause/New York, "but it doesn't get to the heart of the matter," which she views as an outdated and substandard voting system.

Some issues surrounding election reform remain relatively untouched due, in large part, Lerner said, to what she calls a "spitting match" between the mayor and the Board of Elections.

Although the Board of Elections is funded by the city, it is not required to disclose its financial records like other city agencies and, until this year, was not included in the Mayor's Management Report, an annual compendium of data on city agencies. Even with its recent inclusion, something that Common Cause and similar groups had long advocated, the Board of Elections only included select information.

The board has in the past claimed it is under-funded, but without full disclosure of how it allocates its funds, Bloomberg is unwilling to make any increase in the amount that they are given.

"We have a check sitting ready for the Board of Elections for $20 million," Bloomberg said in late 2008. "But they are not getting the money until they tell us what they are going to do with it. This has been preposterous."

During his 2008 State of the City Address, Bloomberg called the Board of Elections "perhaps the only agency that still has the party bosses directly calling the shots" and vowed to combat the problem by teaming with Citizen's Union to create a "nonpartisan coalition." According to Citizens Union, the mayor has yet to fulfill that commitment. (Citizen Union is the sister organization of Gotham Gazette's publisher, Citizens Union Foundation.)

"The city has done some good things to try and bring the Board of Elections into the 21st century, but there is even more that can be done," said Lerner. "Even though it's a bad situation, even though [Bloomberg] doesn't get to have his way, even though he doesn't have influence, simply being in a spitting match with them is not a good management response."

No single issue involving conduct of elections has attracted as much attention as last year's extension on term limits.

The City Council last October by a vote of 29 to 22 extended term limits to three terms, instead of two, for city officials. This allowed Bloomberg, who proposed the change, to seek another four years in office. He had previously said he was against extending term limits.

"There have been some [other] examples of the Bloomberg administration, in my view, pushing the envelope of the ethics laws," he continued, detailing an instance when Bloomberg placed an ad for interns in a school electronic newsletter. NYPIRG believed it was a violation; the Conflicts of Interest Board disagreed. Russianoff's criticisms allude to some of the larger issues that have been raised about the Conflicts of Interests Board and the mayor.

"The Conflicts of Interest Board is a very disappointing body," Lerner said, charging that the board is more concerned with smaller, "technical violations" than with larger questions presented by this administration.

"The board basically has looked at it, studied it, and said, 'Eh, whatever the mayor does is really OK.' But a high school librarian who puts his daughter's book on display, that person is fined $500."

Lerner was referring to a case involving a librarian at Brooklyn Technical High School who was penalized after including his daughter's recently published book in a newsletter and displaying it on a table next to a sign which facetiously read, "Best Book Ever Written."

Lerner and Russianoff both see problems with the mayor appointing all the members of the conflicts board.

"I don't always agree with their rulings," Russianoff said, but he added, "I think they have integrity and they are very smart. I have specific disagreements with them, but I have confidence in the board staff."

Citizens Union has expressed certain disappointments with the actions of the administration surrounding ethics, as well. Rachael Fauss, research and policy associate, Rachael Fauss feels the city has "dragged their feet" enforcing the Public Authorities Accountability Act. The state law, which requires lengthy financial disclosure forms for those on the boards and staff of city affiliated non-profits, drew attention last year when some volunteer members of these boards were hesitant to disclose all of their earnings.

Citizens Union supports shorter forms for these volunteers. The administration's proposed bill changing the forms, however, also would reduce the reporting requirements for compensated city employees who are on the boards, including elected officials and public officers.

Disclosing data has been a hallmark of the Bloomberg administration. Behind the Department of Information Technology and Telecommunications, the mayor has sought to improve government efficiency and communication with the public through technological advances.

Between the Geographic Information Systems, NYC Big Apps, the Mayor's Management Report and the 311 hotline, the city has increased resources for the public to communicate with and keep track of government. 311, in addition to a phone line, has Skype and Twitter accounts.

NYC Big Apps has reached out to get citizens of New York involved. Through a recently introduced contest, programmers have access to what Bloomberg has called a "huge volume of data" to create applications for websites and mobile phones.

"Yes, there is more data and yes, it is much easier to use. That should be applauded," Lerner said. "But they should be willing to put more raw data up -- and, yes, that means sometimes they may have to answer some tough questions."

"But should they just release everything?" said DeNora Getachew, director of public policy and legislative counsel at Citizens Union.

Playing by Whose Rules?

"I think those were steps that the mayor took that will go down to his credit, that will make the city campaign finance program better over the years," said Russianoff.

But Bloomberg, the financial titan that he is, need not concern himself with these reforms. With no private donations, there's nothing for him to disclose. The result, then, is twofold: It would seem he does not have to please special interests as a "thank you" for their support, and he also doesn't have to worry about how much he spends. So far he has spent more than $65 million for re-election, compared to Thompson's less than $10 million.

"I don't buy that spending his own money like a drunken sailor frees him from many of the political concerns that affect Bill Thompson or other opponents," said Russianoff. "He still has to do things that favor what he thinks is his political base." According to Russianoff, that can include spending city money in return for favors, something which Russianoff said he saw firsthand during the term-limits debate as individuals who had benefits from city contracts read testimony supporting the extension "off their Blackberries."

In the end, though, Russianoff has a mixed view of the mayor's record, an attitude that is reflected among many others government watchdogs.

"Spending $65 million of his own money on the campaign -- I think that it really distorts the city's democracy," said Russianoff. "But, having said that, he's overseen some of the most beneficial changes in the campaign finance law."