November 23, 2009 | by DeNora Getachew and Andrea Senteno
Twitter
IT news 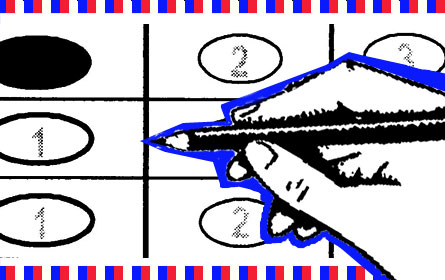 image by yh huang and wikicommons

After this year's election, the main story seemed to be the outcome of the mayor's race and the future of the city for the next four years. Under the radar, however, another storyline developed following the city's primary runoff on Tuesday, Sept. 15 -- called to choose the Democratic nominees for two citywide offices. The abysmally low turnout and high cost of the runoff election -- to the tune of $15 million -- left some wondering, is it really worth it?

What is Instant Runoff Voting?

New York City requires a runoff election when a candidate in a primary election for citywide office does not get 40 percent or more of the vote. Runoffs must be held just two weeks after the primary election.

Some have proposed instituting instant runoff voting, or IRV, as an alternative to the current system of holding a second full, citywide election. This would allow voters to rank the candidates based on their preferences for a particular office among multiple candidates. During the original primary election, the ballot would let voters rank the candidates in the order of their preferred choice, with the common practice being to select three candidates. If a majority, or under New York’s existing law 40 percent, of voters choose a candidate first, that candidate wins. If no candidate garners enough first-place votes, the votes are counted again using the rankings voters selected next in order to simulate a runoff.

Before deciding to implement this change, legislators would have to determine how votes would be reallocated, i.e. which instant runoff method to use. They would also have to determine the number of choices voters can rank on the ballot and the winning threshold. There are two methods commonly used to reallocate votes: sequential and the top-two candidates.

With sequential elimination, it is particularly important that the winning threshold be set at above 50 percent. Otherwise, the order in which candidates are eliminated can affect the final outcome, and the winner may be the candidate who reaches the winning threshold first, rather then the candidate with the most support. This system is used in many places, including in San Francisco for its municipal elections and will be implemented by the Academy of Motion Pictures Arts and Sciences to select the Best Picture winner in 2010.

<p>Top-Two: This model most nearly simulates a runoff election like we have in New York City, since there is only one round of reallocating votes. If no candidate reaches the winning threshold then only the top two vote getters remain and all of the votes for the other candidates are reallocated according to their preference for one of the two remaining candidates.

The main drawback with this system is that, in a race with four or more candidates, it would eliminate a viable and close third-place candidate who otherwise could have garnered enough second-place votes from other eliminated candidates to have won.

Runoffs were first implemented in the city after the 1969 mayoral election, when Mario Procaccino won the Democratic primary against former Mayor Robert Wagner with only 32.8 percent of the vote. Procaccino went on to lose to John Lindsay in the general election. The city then set in place the 40 percent threshold for citywide offices.

Some elected officials and instant runoff voting advocates think, however, that this year's comptroller and public advocate runoffs, where only about 241,000 people voted, highlighted the need to rethink the city’s runoff system. During tough fiscal times when city and state legislators face the need to cut services, some feel that the approximately $15 million dollars spent on the runoff election this year could have been better spent elsewhere.

Representatives of the Board of Elections have testified at several state legislative hearings over the past several months about the financial burden the runoffs present to the agency, particularly given its already reduced budget. Following news reports that the board was strapped for cash for this year's election, State Sen. Joseph Addabbo, chair of the Senate Elections Committee, said in a press release, "I agree with [the] news stories that the city's seeming inability to pay poll workers on Nov. 3 very likely was caused by the $15 million cost to hold a primary run-off election on Sept. 29 following a record low primary turnout (11 percent) on Sept. 15 and was a waste of taxpayer money." (The poll workers did get paid.)

Addabbo recently announced he will try to eliminate runoff elections, saying "The chorus keeps growing and getting louder -- it's time to get rid of wasteful runoff elections for a more sensible approach, especially when the city is poised to introduce optical scan voting equipment. My goal as Elections Committee chair is to increase voter turnout and make the voting process more accessible and efficient."

Addabbo and Sen. Bill Perkins have co-sponsored legislation that would eliminate runoff elections entirely. Meanwhile Sen. Liz Krueger has introduced two bills that would establish an Instant Runoff Voting pilot program: one would establish a pilot program overseen by the State Board of Elections and allow cities to implement instant runoff; and another would allow cities to pass a resolution to opt-in to a pilot program. State Assemblymember Rory Lancman also has a bill, which would require IRV in all New York City municipal elections.

Instant runoff advocates, including FairVote, its main supporter nationwide, saw the recent runoff as a prime example of why New York should adopt this method. Rob Richie, executive director for FairVote, said at the recent Senate Elections hearing, "IRV is a proven ranked choice voting method typically adopted in order to uphold the principle of majority rule without the need for separate runoff elections. IRV has particular relevance when considering [the] runoff law for New York City’s citywide primaries, for vacancy elections and for overseas absentee voting when elections are held close together."

Advocates also see the instant runoffs as a deterrent for spoiler candidates and a way to prevent candidates from winning with only a slim margin of victory or without a majority. Supporters also claim that by requiring candidates to not only compete for voters' first choice rankings, but also for their second choice rankings, it will force politicians to be less inclined to wage negative campaigns. Instead candidates may feel the need to appeal to their challenger’s supporters to gain second place votes, particularly in a crowded race that is likely to lead to a runoff.

Those opposed to IRV claim that it does little to help strengthen minor party candidates, since in the end they are usually eliminated, and it is just as susceptible to gaming as plurality voting, when the candidate with the most votes wins. Others believe that the IRV is too difficult for voters to understand and caution against an overly complicated method of voting.

Logistically there are other issues to be considered in order for IRV to be implemented in New York. The state’s current lever machines do not allow voters to rank their choices, so it could not be implemented until the introduction of new machines. The new optical scan machines that are scheduled to be introduced next year in New York will not have software that would allow voters to rank their choices or be able to tabulate those votes. This software would have to be purchased separately as well as tested and certified to ensure that it works properly.

New York has a number of options for how to implement instant runoff voting. Some states use the system for overseas ballots, which could have a real effect on New York City, where the two-week period between the primary election and the runoff leaves the Board of Elections with far too little time to mail runoff ballots to military and overseas voters and have them be counted. Using IRV even only for absentee and military ballots could provide an opportunity to fully engage these voters, specifically in the case of a runoff. Some states, such as Arkansas and Louisiana, have used IRV only for these types of ballots.

Another option for New York would be to use IRV for special elections to fill vacancies at the state or city level. The system might by particularly appealing in New York City because elections to fill midterm vacancies in the City Council are nonpartisan contests that often attract a large number of candidates, meaning the winner may be elected with only a small fraction of the vote. Implementing IRV for these elections would be one way to ensure that the person ultimately elected has a majority of community support by allowing votes from losing candidates to go to their second, third, or fourth choices.

Another possible opportunity would be to implement IRV more widely for all primary elections, including City Council contests and borough-wide elections, as opposed to the current system where a runoff is required only in citywide races. This would help ensure that fringe candidates do not win due to vote splitting in a crowded field.

While the verdict on instant runoff voting in New York is still out, the recent election has definitely created momentum to find a better system than the current runoff system. If this continues, New Yorkers might find themselves with not one, but three (or more choices) on an Election Day in the near future.