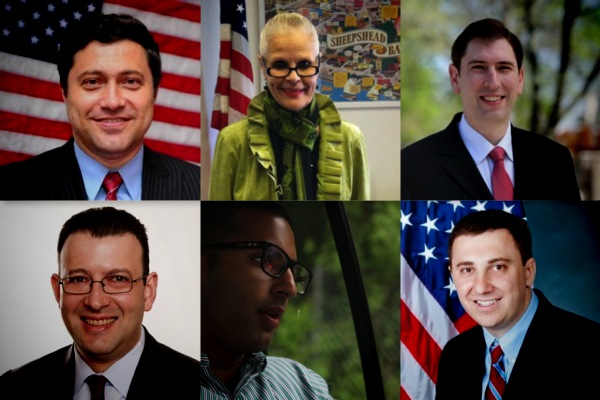 NEW YORK — Like many seaside communities in southern Brooklyn, the neighborhoods of the 48th City Council District were in the path of Superstorm Sandy when it struck nine months ago.

Manhattan Beach was engulfed in waves from the Atlantic Ocean in the south and from Sheepshead Bay in the north. Along Neptune Avenue, which runs through Brighton Beach, the floodwaters rose in some parts to about 10 feet when the hurricane reached its peak.

Nine months later, residents and local leaders are asking what will happen the next time a major storm sweeps through their communities.

That discussion is helping to shape the fiercely contested City Council race for the 48th district, which includes parts of Brighton Beach, Midwood, Sheepshead Bay and Gerritsen Beach, and is home to strong Russian, Arabic and Orthodox Jewish enclaves.

While the five Democratic candidates interviewed for this story say they don’t have exact plans for preparing for future extreme weather, all agree that it is a priority. Storobin, the lone Republican, didn’t respond to requests for interviews.

Scavo said that if she gets elected to the Council her first piece of legislation would call for giving property tax credits to homeowners if they install backwater valves to prevent flooding from the sewer system. She said the valves could cost between $1,500 and $2,000 each.

“A lot of the problems that occurred here was sewer back up because the sewers are so small they couldn’t handle the heavy downpour of rain plus water from the bay and the ocean,” said Scavo, 61, who besides her work for community board 15 volunteers her time to numerous local organizations. She has been endorsed by the Southern Brooklyn Democrats.

Igor Oberman, the board president of the Trump Village West co-op in Brighton Beach and one of three Russian-born candidates in the race, said he had seen proposals for safeguarding the beaches but wasn’t ready to pass judgment on them.

“I have to say I have been trying [to] wrap my head around them,” said the 40-year-old candidate, who records show made a $250 donation to Storobin’s 2012 state Senate campaign but as a Democratic has earned the support of progressive groups including the Working Families Party and 32BJ SEIU. “Several months have gone by where they have talked about should we do it like New Orleans [did] it with levees. I’m not sure … But we need to start having a much more serious discussion.”

Fellow Russian-born candidate Kagan, who is expected to get the support of influential local Russian American media mogul Gregory Davidzon, suggested opening beachside kiosks where the profits would go toward improving infrastructure in the district. Each neighborhood would have its own store, he suggested, that would sell items like sunscreen, goggles and water, and rent equipment like umbrellas, chairs and surf boards.

“Sandy affected our district big time, especially the south part of the district. We are still recovering. We have very old outdated sewer system and surge systems,” said Kagan, 46, who has been endorsed by a handful of liberal organizations, including the United Federation of Teachers.

Kagan and Storobin are seen as archenemies in the race, each fighting to sway the Orthodox Jewish vote.

For Bhushan, the youngest of the candidates at 27, Sandy was his main reason for jumping into the race. He said he was particularly concerned about how money for storm recovery would be distributed. “Do I have a particular plan in place? No, I don’t, but a particular plan is something I would like to craft,” said the long-shot candidate who has little in the way of financial or political backing from the establishment.

A citywide report on the effects of Sandy released by Mayor Michael Bloomberg’s administration in June detailed how most of southern Brooklyn was prone to flooding because of the area’s bays, creeks and inlets. Homes and buildings in Manhattan Beach and Sea Gate were battered because there was no coastal protection. The beaches lost 272,000 cubic yards of sand.

As part of its plan for building a more resilient city, the Bloomberg administration has proposed replacing about one million cubic yards of sand around the coastal areas and raising barriers in low-lying areas at risk of flooding.

Deutsch, who has worked for the City Council for 17 years and is founder of the Flatbush Shomrin — a neighborhood watchdog group made up of local Jewish residents who are unarmed and serve as “eyes and ears” for the police department — said he wants to make sure any proposals are safe for residents and that there is sufficient funding for the plans.

“There are a lot of answers we still have to look forward to, and how it is going to be paid for,” said Deutsch, 44, who has been endorsed by Nelson. “We have to plan, and not just a plan that is good on paper but a plan that makes sense.”

He said more talks are necessary before he can back any plans.

Scavo said she plans to use the power of her voice to make sure investments in the district help the district to prepare for future extreme weather.

“You get out there in the street and rally the truth,” she said. “Your mouth will get funding here. We need someone to lead the people to ask for help, and right now it’s very quiet.”

Of the candidates, Oberman is leading in fundraising with over $100,000. Scavo is the only candidate who comes close with over $95,000 in her war chest. Deutsch has $77,000, and Kagan has almost $76,000. Storobin, who was endorsed by Republican mayoral frontrunner Joe Lhota, filed his first round of fundraising with $45,000. Bhushan, who has said he is not focused on fundraising, trails with almost $4,000.

All of the candidates, except Bhushan, have received campaign contributions from developers, attorneys and construction companies — not surprising, given the number of homeowners in the district.

The candidates will receive six-to-one matched donations through the public campaign finance system. The next filing deadline is Aug. 9.

Natraj Bhushan, a longtime resident of the district and an attorney, graduated from City University of New York School of Law at Queens College. He was born in Oklahoma and moved to New York when he was 6. He interned at Councilman Leroy Comrie's office in 2008, and gave free legal services to Nelson's office during Superstorm Sandy.

Chaim Deutsch, who has lived in Brooklyn all his life, organized a group of Jewish volunteers as the Flatbush Shromin neighborhood watchdog group in 1991. He is currently aide to term-limited 48th district City Councilman Mike Nelson and has worked for the Council for 17 years.

Ari Kagan was born in Russian and moved to the United States over 20 years ago. Since moving to Brooklyn, Kagan has worked as a journalist for a Russian newspaper and hosts a Russian TV show. He was an aide to city comptroller and mayoral hopeful John Liu as well as Congressman Michael McMahon. He graduated from Baruch College.

Igor Oberman fled with his family to the United States in 1981 from the former Soviet Union to avoid religious oppression. He was 8-years-old. Since moving to Brooklyn he became the first of his family to graduate college and went on to obtain a law degree. He has served as a judge at the Office of Administrative Trials and Hearings and worked for Borough President Marty Markowitz as a liaison to Russian and Jewish communities. He is also the board president of the board of directors of Trump Village West co-op in Brighton Beach. He graduated cum laude from Brooklyn College and attended New York Law School.

Theresa Scavo, a former public schools teacher, has been a member of Community Board 15 for 13 years and has been chair since 2006. She is also the vice president of the High Way Democratic Club. She owned a retail business for 26 years. A life-long resident of Brooklyn, Scavo graduated from Hunter College and went to Richmond College for her master's degree.

David Storobin is a Russian native who is a real estate broker and an attorney. He ran for state Senator and won only to serve for 11 days because his district was eliminated after the district lines were redrawn. He is vice-chairman of the Kings County Republican Party. He received his law degree from Rutgers University.