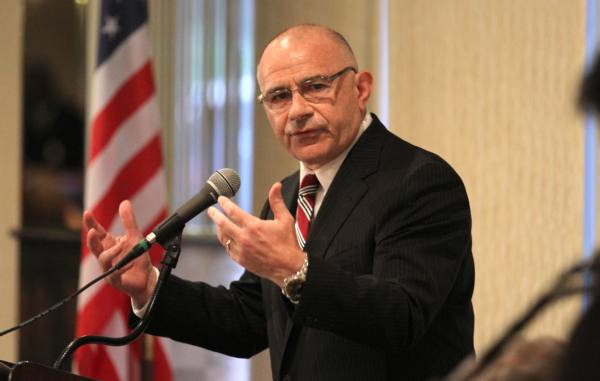 No less than The New York Times chastised the organizers for neglecting to invite Albanese to appear in the debate broadcast on WABC-TV. “This is a shabby way to treat Mr. Albanese,” the Times Editorial Board wrote of the organizers, which included The League of Women Voters. “Yes, he is low in the polls, but he has been a thoughtful contributor to this long, lively campaign.”

Days after the debate from which he was not invited on Aug. 13, the Gotham Gazette spoke with Albanese.

“I am an outsider,” said the candidate, who after serving as a Councilman in southern Brooklyn for 15 years ran for mayor in 1997 and came in third with about 22 percent of the vote. “I have paid a price for that. And the people paid a price because they are not getting a full picture of all the candidates.”

In our exclusive interview with Albanese, the candidate continued to provide thoughtful answers on a range of key issues in the mayoral race, from stop-and-frisk to working with Albany. A former public school teacher and father of two teachers, he also spoke about his ideas for education.

GOTHAM GAZETTE: What did people miss by the fact that you were not included in the Aug. 13 debate? What would you have been telling people?

And also I would have pointed out the connection between contributions and public policy, which they can't point to. for example the taxi industry. They have contributed huge sums of money to Bill de Blasio, and he opposed the plan for outer borough taxi service. Bill Thompson is receiving huge sums of money from Al D'Amato, who's a major lobbyist in this city. And he's certainly not doing it because he's interested in his progressive policies.

Those are the kinds of things I would have brought up and tied them to public policy: how these tax breaks impact budgets in the city where money is diverted to folks who don't really need it and it's taken away from class rooms and police officers.

GG: What tax breaks are we talking about?

ALBANESE: For example, last week we pointed out that there were four developers that received huge tax breaks in the city — for example, the 421a tax breaks that were just given to luxury condos in Manhattan through a special legislative loophole passed in Albany. At the same time they've contributed to members of the state Legislature. The Moreland Commission, which Cuomo established, has subpoenaed those developers as they investigate undue influence by these folks in the real estate industry.

Well, my opponents — all of them with the exception of John Liu — have received huge sums of money from these folks, and we laid it out in a chart last week. Which practically nobody covered except Crain's. We said these four developers have just been subpoenaed by the Moreland Commission and I'm asking you to return that money. Those are the kinds of issues that are not being discussed in this race when I'm not in the room.

Issues such as the fact that these people have been in office for the last 12 to 15 years. I've been in the private sector. They blame things wholly on Mayor Bloomberg that they don't like. meanwhile they are part of the government. Nobody is going to raise that. I’ve raised that in other forums. I have said that you would think these people were John Q Public. These are people who have power and they are acting as if they are block association presidents.

GG: I want to make sure we talk about some for the policy issues that you have brought up. Recently, the judge in the stop-and-frisk case came out with a pretty harsh judgment against it and called for a monitor. What was your reaction to that?

ALBANESE: I don't support a monitor. Under an Albanese administration, we're going to do things that are constitutional when it comes to stop-and-frisk. we're going to train our p officers much more effectively so that they know exactly what the constitutional requirement is for stopping somebody. But I don't believe we need all these monitors. the city council should be monitoring the police dept. They have done a lousy job. Now they've passed a bill to create a monitor. Now the judge has created another monitor.

I just think we need common sense here. It's common sense that police officers should be able to stop someone if he or she is a suspect under reasonable suspicion. It's common sense. It defies all logic to think that we should abolish that practice, which by the way even the judge thinks is constitutional. I just think we're really spending an incredible amount of time on an issue which has to be mitigated. But it can be mitigated by making sure we focus on quality stops rather than quantity.

GG: Mayor Bloomberg has had a tough time trying to get Albany to do anything. What would you do differently to work with legislators up there?

ALBANESE: I would work with the city legislators, state senators and members of the Assembly, and as mayor you have a lot of leverage to get stuff done for them in their districts. I would use that to get things accomplished. In all fairness, the mayor did get one of the most difficult things done — which was to get the central Board of Education under the control of mayor. He did get that done. That was a major achievement, which allowed the mayor to pick his own commissioner. That is not to be underestimated as an achievement. So he got some things done. You can't get everything done. I have a number of high priorities that I want to get done in Albany, and that's what I'm going to focus on.

{pullquote}I want to set up pediatric wellness centers where you start working with children as soon as they're born. Teachers, nurses and doctors working together ... so we can provide the kind of support they need to make sure that they are up to snuff.{/pullquote}

GG: What would you do differently in education as mayor?

ALBANESE: I would first appoint a chancellor who was an educator. i would stop demonizing teachers. you know there's a tone issue where the mayor has really, really demoralized the teaching corp. I have two daughters who are teachers and they come home and say why does the mayor put out that stuff about us? And every time I run into teachers in the street, I always hear about how badly the mayor treats them. So the first thing to do is appreciate the fact that we have a lot of great teachers in the city working under adverse circumstances — large classes, lack of supplies, buildings in some cases that are falling apart. That would change. The tone would change. The second thing I would do is on pediatric wellness.

GG: Could you talk about that some more?

ALBANESE: The biggest problem facing all of our youngsters, particularly in poor communities, is the fact that poverty is the elephant in the room. Poverty causes stress. Stress causes developmental issues. Now we know beyond a reasonable doubt based on scientific studies that these kids are coming into our schools at 4 or 5 years of age way behind, and many of them never catch up. The average middle class kid knows about 1,400 words by 4 years of age. The average kid from a poor family knows about 300 words. That's a huge gap. And it's not an IQ issue.

So what I want to do is, and there are examples of this, isolated examples, that definitely work, is I want to set up pediatric wellness centers where you start working with children as soon as they're born. Teachers, nurses and doctors working together with these children so we can provide the kind of support they need to make sure that they are up to snuff when they come into our schools. I believe it is political malpractice not to address it based on what we know now. I also want to merge all the early childhood programs. They are split between three agencies. Merge them all into a Department for Early Learning. The head of that would report to the [Department of Education].

GG: A lot of voters may not be familiar with your time as a City Councilman. What were your top three achievements?

ALBANESE: My top achievement is that I authored the city’s' first living wage law which became a model for living wage legislation across America. The bill that I passed impacted 70,000 workers and put $3 billion in their pockets. That was in 1996 where my bill called for any contractor who does businesses with the city in four areas that we contract out that they would have to pay their workers $12 an hour plus health benefits. it passed.

The other achievement I'm proud of is that in 1989, when we were down to 24,000 officers, I led the charge to get another 16,000 officers hired, which helped to bring the crime rate down.

GG: You ran for mayor once before in 1997 and got 22 percent of the vote. At the time, they called you “Sal Quioxte.” They said, basically, you're tilting at windmills in your effort to run for mayor. Some would say you’re doing that again this time.

ALBANESE: After the race there was a couple of articles written saying that I surprised a lot of people. Even though I did not win, I got 22 percent of the vote. Which is a pretty sizeable number. So they were wrong about tilting at windmills. I ran a very, very good race with very limited resources. And I think we're going to surprise a lot of folks this time around as well.

No, look, when you're an outsider, people pooh-pooh your efforts because the conventional wisdom is that if you don't accept money from lobbyists and developers and major funders you can't win. I don't want the job under those circumstances. I’m running because I want to make the city a better place. And if I am co-opted before I get there, if I owe favors all over town, the job is not worth it.