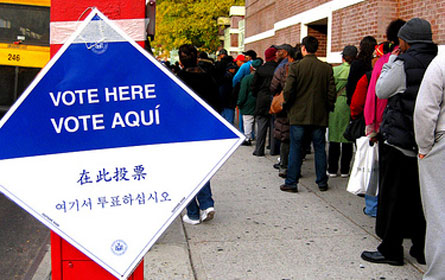 The 2009 city election in New York yielded the lowest voter turnout for a mayoral race since 1969 -- only 26 percent of the city's 4.1 million registered voters showed up to cast a ballot for mayor in 2009, down from 33 percent in 2005. Even in 2008, with interest piqued by the presidential election, New York state ranked eighth to last in a state-by-state measure of voter participation among eligible citizens and fifth to last in voter registration.

The New York City Charter Revision Commission has been considering various ideas to increase voter participation, including nonpartisan elections, which Mayor Michael Bloomberg tried, without success, to get voters to approve in 2003. Speakers offered other suggestions at a hearing last month, including changing the city election calendar and implementing early voting.

Unbeknownst to many New Yorkers, though, a small, nonpartisan slice of city government called the Voter Assistance Commission already is charged with going out and encouraging people to register to vote. As voter turnout and registration continue to decline in the city, some say the charter commission should look to bolster the role of this tiny government body.

"If you look at the mission of VAC as put in the charter in 1989, I think you could say that it probably has not fulfilled that mission," said Marjorie Shea, elections specialist for the good-government group Women's City Club of New York, "mainly because in the last 20 years they were very under-funded and still are."

With only three full-time employees and the occasional intern, the Voter Assistance Commission has barely enough staff to effectively carry out its existing initiatives, let alone take on new ones.

Established as part of sweeping changes to the city's charter in 1988, the Voter Assistance Commission is responsible for identifying under-registered segments of the city's population and enabling eligible residents to register and vote. It is intended to serve as a bridge between city government and the voters.

"If there were ever a commission that was person to person â€¦ it's the Voter Assistance Commission," said Jane Kalmus, vice chair of the commission.

The commission compiles an annual guide to city elected officials and spearheads Voter Awareness Month, a citywide outreach campaign before the primaries each fall. Its newest initiative is the Youth Poet Laureate Program, which organizes annual spoken-word competitions on promoting voter awareness. The winner works with the commission to help educate young voters.

The city charter also calls for the commission to offer an urban equivalent of sorts to the National Voter Registration Act of 1993, or "motor-voter" law, which requires states to provide drivers renewing or getting licenses with the option of registering to vote. In an effort to serve non-driving New Yorkers, the city in 2000 passed Local Law 29 -- also known as the Pro-Voter Law -- giving the Voter Assistance Commission the authority to oversee voter registration efforts at community boards and various city agencies.

Since Mayor Ed Koch's charter revision commission created the Voter Assistance Commission, successive administrations have significantly weakened it. The agency went without an executive director for about six years under the Giuliani administration, Kalmus said, and had no chair, a position that must be filled by the mayor, for about four years. Subjected to repeated cuts, the commission had a budget of only $150,000 when Mayor Michael Bloomberg took office in 2001.

According to Jones, about 800,000 people in New York City, or 15 percent of the electorate, are eligible to vote but not registered. These people are predominantly low-income or members of minority communities, he said. Jones thinks the commission could be a valuable vehicle through which to address the problem -- but only if it were strengthened.

"It's so tamped down that people have given up on it," Jones said.

While it is nonpartisan, the commission exists partially under the mayor's office. This, according to Jones, "puts it in the hand of people who have a vested interest in seeing it not work." Increased voter registration, he said, means difficulties for incumbents, who are comfortable with the electorate that voted them into office and not eager to contend with new, unfamiliar voters.

Other advocates agree that the commission, fundamentally handicapped by its lack of resources and of independence, needs to be bolstered. Various good-government groups, including the New York Public Interest Research Group, the Women's City Club and Citizens Union (whose sister organization publishes Gotham Gazette) have come up with proposals on how the charter revision process could strengthen the commission.

Some would like to see structural changes, such as having officials other than the mayor -- borough presidents or the comptroller, perhaps -- appoint some members. Other suggestions include more efforts to educate voters, legal staff to monitor federal voting laws, efforts to streamline city agency compliance with motor voter act and requiring the commission to issue an annual report on voter registration in the city.

Another significant proposed change would set the commission's budget as a fixed proportion of the city's Board of Elections budget; still another would merge the Voter Assistance Commission with the Campaign Finance Board. The two organizations collaborate to create a Video Voter Guide for every municipal election. Transcripts from the video are translated into other languages and made available to the public.

Kalmus agreed that changes need to be made.

Working with the Board of Elections

The main responsibility for running elections in the city lies with the Board of Elections, an agency that has been the target of sharp criticism from Bloomberg and others. Given that, some advocacy groups, including NYPIRG, would like to see the commission given "clearer responsibilities to ... oversee the work of the board."

The focus on bolstering the commission's role as it relates to the board comes as the city gears up to switch from the lever-operated voting machines that it has used since the beginning of the 20th century to a new, optical-scanning system.

The technology will present new challenges for voters, and some have criticized the Board of Elections for not doing more to anticipate these difficulties. Already the Brennan Center for Justice, the NAACP and other groups have filed a lawsuit against the state Board of Elections, claiming that the machine's way of handling "over-voted" ballots -- those marked with more than one candidate in a particular race -- will disenfranchise thousands of voters, particularly minorities and non-native English speakers.

The city Board of Elections, which is responsible for the transition in the five boroughs, has not had an executive director since January and has not made public any attempts to fill the post. The executive director of the board also serves as one of the seven ex-officio members of the Voter Assistance Commission.

The vacancy came to harsh light at public Voter Assistance Commission meeting two weeks ago in conference room near City Hall, as commissioners sat facing an audience that consisted mostly of representatives from good-government and other advocacy groups. Although the city charter mandates bi-monthly public meetings on issues that affect voting and voters' rights, the commission had not met since December, citing reluctance by the Board of Elections to send a representative.

"The board does itself no service -- the board does the people of the city no service -- by making this decision. I wish they were here today, and I hope that they will pick an executive director soon," he said, adding that he had hoped to review the board's plans for making the public aware of the new voting system.

The board defended its decision to stay away from the meeting. Deputy Executive Director George Gonzalez, who participated in VAC meetings in the past and is considered a leading candidate for executive director of the board, said that only the executive director can serve as an ex-officio member of the commission.

"There would be nothing for me to say or do at these meetings," Gonzalez said. "By the same token, we have board meetings. If VAC wants to know what’s going on, they could send someone to sit in on public meetings and know what we discuss."

Another elections commissioner, J.C. Polanco, expressed regret that there had been no board presence at the meeting. "I would've looked forward to attending VAC's meeting had I been informed that there was a meeting," notwithstanding the absence of an executive director, he wrote in an e-mail.

Since state law precludes any other agency from fulfilling the board's responsibilities, the Voter Assistance Commission cannot help train poll workers about the new machines, for example. But it can help educate voters as to the changes they will encounter at the polls -- if the commission is given the resources.

With the primary less than 80 days away, officials and good-government groups alike have expressed concern about what they see as the board's lack of voter education efforts. While the board has created a Web site about the new machines and begun to hold demonstrations throughout the city, many say that they have yet to see printed materials or advertisements. The board also has failed to update the voting section of its main Web site, which still lists detailed instructions on how to use the lever-operated machines.

"I have seen no firsthand information about the new voting machines anywhere," Kalmus said. Public Advocate Bill de Blasio echoed her concerns and has called for the Voter Assistance Commission to be strengthened through the charter revision process.

The board, according the spokesperson Valerie Vazquez Rivera, is implementing a "multi-prong approach on getting the word out to registered voters about the new machines." It will, she said, include subway, bus and newspaper ads, demonstrations throughout the city, and a legal notice sent to all voters before the September primary. A calendar of events and demonstrations can be found on the < a href="http://www.votethenewwayny.com/calendar.php">Web sitededicated to the new voting system.

Whatever the board is -- or is not -- doing, many advocates think the Voter Assistance Commission should have more responsibility for this outreach and more resources so it can aggressively register New Yorkers to vote.

"In New York, the stakes are much higher than in many other places in the nation," Jones said during his testimony to the Charter Revision Commission. "The only thing that keeps this city from flying apart is the ability to voice concerns through the electoral process."