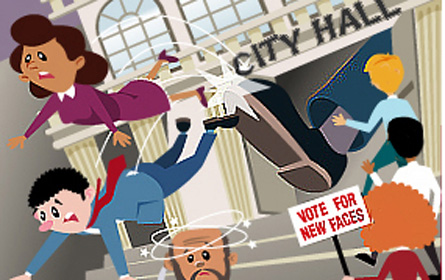 When City Council members Sara Gonzalez, Darlene Mealy and Jimmy Vacca voted to extend term limits nearly two years ago, they may not have expected to miss out on the opportunity to serve 12 years at City Hall.

But as the city Charter Revision Commission mulls what type of term limit proposal to put on the ballot this November, members who joined the council after 2002 could end up stripped of their shot at three full terms.

The commission has not decided what type of term limit proposal it will send to voters this fall, let alone whether it will apply to the current council. At a meeting in Lower Manhattan Monday, several members of the 15-member commission voiced support for a return to the two-term limit instead of the current three.

Should voters approve it, the question becomes whether 32 sitting council members will be sent packing after a potential term two. For 13 of them, that means their current term could be their last.

"Two terms immediately affecting everybody, that's what I would like to see the answer on," said charter Commissioner Tony Cassino.

From Three to Two

It comes as no surprise to some council members that the two-term proposal appears to be the favorite at the commission.

"I'm shocked. I'm so surprised that the Charter Revision Commission that everybody believed [would] is actually going to come back with two terms," said Councilmember Vincent Ignizio of Staten Island. "That's with tongue planted firmly in cheek."

Nonetheless, Charter Commission Chairman Matthew Goldstein cautioned on Monday not to jump to conclusions. He said all proposals are still under consideration.

In a preliminary report released last week, the charter commission staff recommended the commission examine several term limit proposals, including two terms for all elected officials and another that gives two terms to the mayor, public advocate and comptroller and three to the council. Despite expert testimony earlier this summer that a three term limit for the council could help balance power at City Hall, the idea has not picked up a lot of steam among charter commissioners.

Depending upon what -- if any -- term limits voters approve, these council members could see themselves limited to two terms. The following members could be affected:

The Former Freshmen (elected for their first full term in 2005)

The Freshman Class (elected for their first full term in 2009)

Should the commission go with two terms, council members hope they would hold the current occupants of City Hall harmless.

"If there are changes, they should be prospectively done so that you do not have council members that are similarly situated serving different terms," said Councilmember Dan Garodnick , who is currently in his second term.

Some of the 13 members serving their second term bring up the issue of "fairness," regardless of how they cast their vote on the extension.

"I don’t see how you can treat some members differently than others," said Councilmember Letitia James, who is serving her second full term and staunchly opposed the term limit extension. "But I'll defer to the voters."

Just before the 2008 vote on term limits, Council Speaker Christine Quinn promised the 16 members serving their first term that they would be grandfathered in to any change in the term limit law by a charter commission. She called it a "technical matter" then.

Six of them voted to approve a third term and were then re-elected to their second term. (In addition to Gonzalez, Vacca and Mealy, Inez Dickens, Maria del Carmen Arroyo and Thomas White voted for the term limit extension.)

The speaker's office doesn't appear worried that it will have to renege on its promise.

"There is still a considerable way to go in this process," said the Quinn's spokesperson Maria Alvarado in an e-mailed statement. "Right now all that has been presented is a preliminary staff report and recommendations. We look forward to receiving the commission’s final recommendations with actual language and details."

Two years after the extension, the speaker will have a whole other block of council members to deal with who want the opportunity to get a third term too: the 14 members who took office this year.

"I think it's unfair what the mayor did period and now that he got what he wanted he doesn’t care about anyone else," said Councilmember Jumaane Williams, who started his first term in January. "I would be very upset if I was elected on one belief and one rule structure and that rule structure is just changed."

Another Round of Suits

Should the two-term proposal end up on the ballot this fall and be approved by voters, some officials question whether it could legally force out the current class of legislators.

"Do I think it could be done legally?" said Randy Mastro, an attorney who argued the case against the term limits extension. "Yes."

One council member said members would consider challenging it in court, claiming it violates equal protection rights. Mastro said that would be a difficult argument to make, considering 15 of those members were elected under a two-term limit and the other 17 members of the freshman class knew the term limit question would be revisited.

If the argument against the two-term limit held, charter Commissioner Cassino said, the rules would never change.

"I don’t think someone is entitled to say, 'Because he got the extra term I should,'" said Cassino. "When does that end? I think it ends when the people decide it ends."

Other commissioners have sided with the council. Commissioner Carlo Scissura, the chief of staff for Brooklyn Borough President Marty Markowitz, said if voters approve a change to term limits it should take effect in 2013.

"I wouldn't want some members to have three and some to have two," he said.

Ultimately, the final decision will be up to the voters. According to a poll from Quinnipiac University in May, 57 percent of voters say officials should be limited to two terms, while 16 percent say three terms. About 5 percent said four terms and 19 percent would do away with term limits.