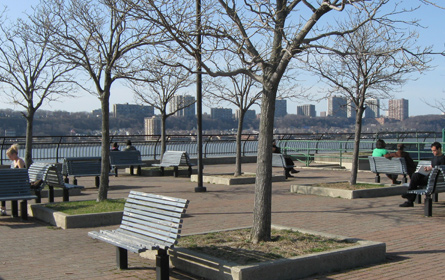 As state legislators and Gov. David Paterson negotiate next year's budget, for the first time in the state's history the possibility of closing state parks and historic sites is on the table.

To help address a $9 billion shortfall in the budget for the coming year, Paterson is proposing a $29 million cut to the operating budget of the Department of Parks, Recreation and Historic Preservation, on top of a $49 million reduction over the last two years -- a total of about 40 percent. The agency says that $11.3 million of the cuts can be achieved only by closing 91 state parks and historic sites and reducing services in 40 additional locations.

The cuts would sharply curtail hours and programs at several parks within New York City, as well close all or part of a number of parks, including Jones Beach State Park and Minnewaska State Park Preserve, popular with city residents.

The Senate and Assembly budget resolutions restore enough money to keep the parks open, for this year at least, though anything can happen when the final budget resolution is negotiated by the Senate majority leader, Assembly speaker and governor.

That the state is even considering closing half of its 178 parks and historic sites is deeply troubling for the future of the state park system, which already has an estimated $650 million capital backlog of repair and rehabilitation projects. Its 325,000 acres include roads, dams and bridges, more than a thousand miles of trails, 5,000 buildings (including dozens of historic structures), more than 8,000 campsites, and golf courses, pools, beaches, marinas and boat launches.

New York is not alone. Facing crushing budget shortfalls, many governors and legislators around the country want to sweep the pocket change spent on state parks and use it toward closing budget deficits, as detailed by a recent article in Parks & Recreation magazine. (A notable exception is Gov. Chris Christie of New Jersey, whose austere budget proposal keeps parks open "so that struggling New Jersey families will have an affordable, in-state place to vacation this summer.")

Arizona already has begun shutting down state parks, striking fear into towns dependent on tourism and raising questions about securing archaeological treasures. Last year, Gov. Arnold Schwarzenegger proposed eliminating nearly all of the California park system's operating support, which would have closed 80 percent of state parks, although that drastic action has been forestalled for the time being.

The prospect of shuttering New York State parks has generated outrage and set off a wave of rallies from Long Island to Buffalo, as residents have organized to defend their local park. According to a Siena College poll released March 22, voters "strongly oppose" closing the parks, by a 9-1 margin.

"No one disagrees that we have a severe budget shortfall," said Sen. JosĂ© Serrano, chair of the Senate Committee on Cultural Affairs, Tourism, Parks and Recreation. "But if you look at the numbers, over the past years, parks have had to bear the brunt. Even in good stock markets and budget surpluses, the state never did enough to maintain the capital structure within parks and increase programs."

It may not even be legal to close most of the parks or facilities on the list. Most of the state's parks have received grants from the federal Land and Water Conservation Fund, a dedicated funding source for land conservation, parks and recreation. One part of the program provides matching grants for state and local projects. To protect the federal investment, the law governing state grants contains strong protections to assure that project sites remain used as intended. In response to a question on this issue by New York Democratic Rep. Maurice Hinchey at a recent congressional hearing, National Park Service director Jon Jarvis confirmed that parks funded in part with federal money must remain open to the public.

Advocates fear that if parks are closed it might be years before they can be reopened. Leaving parks unstaffed and minimally maintained makes them vulnerable to damage from neglect and vandalism, putting at risk decades of public investment. Getting bathrooms, buildings, pools, trails and other facilities back in usable condition would likely cost many times the minimal amount saved by the closures.

"Closing parks would cause more harm than any problems it would solve," said Shawn McConnell, director of the Campaign for Parks at Parks & Trails New York, a statewide advocacy group. "Even during the Great Depression, our government did not close parks. In fact, the president felt parks were important enough to invest in and made them part of the plan to revitalize the economy and nation. That's what parks could be today."

Costs and Benefits of State Parks

Asked why the parks agency received a disproportionate cut thought even it represents a quarter of a percent of the total state budget, Matt Anderson, spokesperson for the New York State Division of the Budget, said that even small reductions add up to "an important component of our deficit reduction plan. While parks are certainly important, it doesn't have the same health and safety issues" as health care, law enforcement, prisons or other "direct care environments."

Advocates say this view is shortsighted and ignores the importance of parks and recreational programs for public health, especially at a time when the government is trying to address increasing rates of obesity.

Park programs can also reduce crime and other social problems. When park programs are cut, "one of the things that's lost is the potential to address jobs creation for at-risk youth," said Richard Dolesh, chief of public policy at the National Recreation and Park Association. "Park programs have been a traditional source of part-time and summer jobs. They have produced tremendous value for a minimal amount of money spent. It's healthy outdoor work that teaches basic jobs skills and instills self-discipline, self-reliance and a sense of self-confidence."

Aside from these benefits, studies show that state parks, in New York and throughout the country, generate quantifiable economic benefits for a minimal cost.

A study by the Political Economy Research Institute of the University of Massachusetts Amherst last year found that every dollar invested in state parks (both operating and capital expenses) returns $5 in economic benefits. Direct spending by the parks agency and by visitors to state parks supports up to $1.9 billion in output and sales, $440 million in employment income and 20,000 jobs.

Analyses conducted in other states, including Tennessee, Maine and New Jersey, showed that the parks are vital generators of direct and indirect spending, tax revenues and jobs far in excess of the money the states spent on operating the parks.

The Impact on New York City

While the majority of parks slated for closure are upstate, New York City residents would also feel the effects of park closures and service reductions.

Riverbank State Park, for example, is slated for a budget cut of $785,000 that would reduce its operating hours by 40 percent, close the outdoor swimming pool and eliminate all programs for seniors as well as musical and theatrical performances. Riverbank was used by more than 3.4 million people in 2009, making it the fourth most visited park in the state, close behind Jones Beach State Park. The Paterson budget also would close Bayswater Point State Park in Queens; cut operating hours at Roberto Clemente State Park in the Bronx; and shut Clay Pits Pond Park in Staten Island two days a week. Numerous parks in Nassau, Suffolk, Westchester, Putnam and Ulster counties that are popular day trips for city residents also would be completely or partially closed.

Community advocates say reducing operations at Riverbank State Park would break the agreement the government made with residents to provide a park in exchange for their accepting the sewage treatment plan in their midst. Manhattan Community Board 9 passed a resolution opposing the cuts.

The 28-acre park was built on top of the controversial North River Sewage Treatment Plant to appease the community. Though at first dubious of the park and its high price tag, neighborhood residents have come to embrace it. In addition to providing recreation and relaxation, the park has become a nexus of the community, with sports teams, a summer camp, holiday events, senior programs, and activities and outreach for youth.

"The state promised us an Olympic-sized pool, hockey rink, football field, running track, and all kinds of indoor gym space, the cultural center. That was the deal. We take the sewage and we get the park," said Brad Taylor, a local activist. "And now, they're saying they are going to cut back on the hours, open at 11 a.m. instead of 6 a.m. and close at 9 p.m. instead of 11 p.m. It's completely reneging on this commitment that they made, that as long as we're treating sewage for a good part of the city, we're going to have a fully operational park."

On an unseasonably mild Friday afternoon in mid-March, the park's esplanade and winter-bleached lawns attracted mothers with strollers, children in their school uniforms, teens practicing dance routines, and various people sitting on benches soaking in the sun and the spectacular river view. Soccer and baseball games were in full swing, while the sound of hockey pucks reverberated from inside the rink.

A couple sat a picnic table while their sons, 6 and 8, ran around on the grass. "Last year our kids came here for the swimming classes," said the father, who said his name was Amado. "They are going to close the pool and cut hours. We come today to see if we can register them for baseball. Because of the cuts they can't register anybody."

A mother taking her two girls to the playground said, "My husband and I both run here. My kids swim in the outdoor pool. We come here on weekends. I like the park because it's so safe, and honestly, I'm worried that the cuts will reduce safety."

Less than two years ago, at the 15th anniversary of the park's opening, a state official said, "It's hard to imagine life in Harlem today without Riverbank State Park. â€¦ Families have come to rely on Riverbank as a place for healthy recreation, spirited competition, and inspiring arts and entertainment. It is a tremendous community asset, and we need to make sure it remains vital and accessible for many years to come." That official was Gov. Paterson.