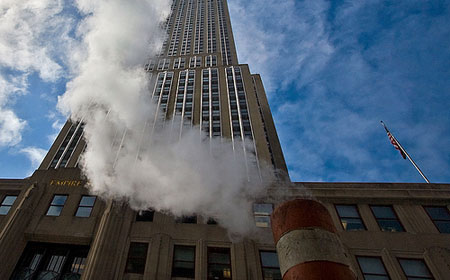 Council Speaker Christine Quinn said the package of legislation would set a standard nationwide. Buildings of more than 50,000 square feet will have to upgrade their lighting by 2025, and those same buildings will now have to conduct energy audits every 10 years.

The city's existing buildings account for 80 percent of the city's carbon footprint and represent $15 billion a year in energy costs.

While environmental advocates and city officials championed the green-buildings package, some critics question the effectiveness of one piece of legislation (Intro 967-A), which originally required large buildings adopt the recommendations of the now-required energy efficiency audits. The version the City Council approved yesterday by a vote of 41 to 5 would make those recommendations voluntary.

Some charge the council backed away from the tougher legislation because of lobbying from the city's business industry, which called the bill too expensive to implement in a floundering economy. Quinn argued yesterday that the council decided not to push for mandatory retrofitting because it would require a significant capital investment by landlords that would, in turn, trigger rent increases.

Even without the mandatory retrofitting, officials have acknowledged that the entire package of legislation could be costly for property owners. But they argue overall it is a net positive.

"Once these changes are put in place very quickly the building will not only make back whatever they have put in, they will actually begin to go beyond that and save," said Quinn.

While the council abandoned the requirement for retrofitting, officials did say the city would strive to set an example. The bill requires the city retrofit its buildings if audits show it would result in savings on energy bills in seven years.

The council is also requiring owners of large buildings to conduct smaller energy-efficiency improvements, which would have less of an impact on their pockets. Before every audit is submitted to the Buildings Department, buildings of more than 50,000 square feet will have to be retro-commissioned, which is when maintenance and low-cost performance improvements are made to increase a building's energy efficiency.

Environmental advocates have praised the package.

"You come into a negotiation asking for more than what you were going to get," said Dan Hendrick of the New York League of Conservation Voters. "Even with all the amendments, it's still groundbreaking."

In addition to the auditing bill, the council also passed legislation (Intro 973-A) by a vote of 44 to 2 that requires buildings of more than 50,000 square feet to make lighting upgrades by 2025, including the use of sensors and more efficient light fixtures. It would also require the installation of submeters, and landlords would have to provide tenants with monthly breakdowns of their electricity consumption.

In addition, the council unanimously approved a new energy code (Intro 564-A) that requires equipment installed during renovations to meet efficiency standards, and it approved legislation (Intro 476-A) that requires large and city-owned buildings to monitor their energy and water consumption and report it to the Department of Finance. That data will eventually be made public.

In addition to its green-buildings package, the council approved a zoning and financial incentive program to spur the construction of supermarkets in neighborhoods that have a drought of fresh food. Otherwise known as the Food Retail Expansion to Support Health, the program targets neighborhoods in the South Bronx, Upper Manhattan, Central Brooklyn and Downtown Jamaica.