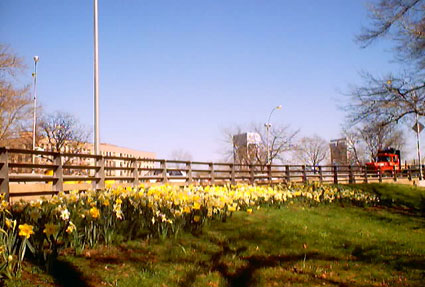 To balance New York State's budget in the deepening recession, Gov. David Paterson is proposing a thousand painful cuts in state services from education to health care to the arts. But his proposed cuts would fall disproportionately on parks and open space, particularly on the principal state funding source for this, the Environmental Protection Fund. The dedicated fund, as well as other state money, has been instrumental in the city's reclamation of the waterfront over the last decade and in protecting some of its last natural and open spaces.

The Environmental Protection Fund was set up in 1993 to provide a consistent source of funding, in good times and bad, to protect the state's environment and public health and invest in its future sustainability. The fund's revenue comes primarily from the state real estate transfer tax, and the money is supposed to be spent only on open space, solid waste, parks, recreation and historic preservation.

The New York City projects that have relied on this funding source include the Hudson River Park, the Bronx River, the Brooklyn Waterfront Greenway, the Harlem River Greenway and the effort to recover Jamaica Bay's disappearing wetlands. A report recently released by Friends of New York's Environment, a broad-based coalition advocating for real increases in the fund, highlights projects throughout the state that were made possible by the fund.

Over the last decade, appropriations for the Environmental Protection Fund have fluctuated between $100 million and $150 million a year.

Like a child's piggybank to an unscrupulous parent, however, the fund often presented a tempting target for governors seeking to balance the budget. They have frequently "swept" unspent money from the fund and used it for unrelated programs. "Over the years, the Environmental Protection Fund has been raided to the tune of half a billion dollars," said Tim Sweeney, director of the Campaign for Parks, a state parks advocacy coalition. "They couch it in terms of loans but none of the money has been repaid so far."

"It's not really extra money â€“ it's money that should go to environmental programs," said Jessica Ottney, director of state government relations at The Nature Conservancy. It often takes longer than a year for new programs and complicated transactions like land acquisitions to spend allocated money, she said. Taking unspent funds "eliminates money for projects that are already under way and then it may not be there when it is needed."

In 2007, Gov. Eliot Spitzer and the legislature agreed that there was a need to significantly increase funding and passed legislation to boost appropriations to $250 million in fiscal year 2008-2009 and nearly $300 million for the 2009-2010 fiscal year and subsequent years.

In the most draconian cut for the coming year, he entirely eliminated the fund's program that supports zoos, botanical gardens and aquariums, which would force severe cutbacks in hours, public programs and free visiting days at some of the city's major tourist attractions.

State capital funds to continue building the Hudson River Park remain for the coming year, but the governor is proposing zero funding â€“- both capital and operating -â€“ for Governors Island, which relies on both city and state funds, although not through the Environmental Protection Fund.

The Governors Island Preservation and Education Corp., the city-state partnership that operates the former military base and is developing it for green space, recreation, education and other uses, has been opening the island to the public every summer. Last year, more than 128,000 people took the short ferry ride to listen to folk music, picnic, tour the historic military sites and bicycle around the car-free island.

Without state funding, the island would remain shuttered this summer. Although the city has said it would provide its share of the $14.8 million in operating funds requested by the corporation, it may withhold that money if there is no state match. Uncertainty over state funding could jeopardize millions of dollars of private funding from the arts and concert groups that are now planning next summer's programs. Keeping the island closed this summer could cost the city several million dollars in lost tourism revenue, according to Robert Pirani, executive director of the Governors Island Alliance.

Eliminating capital funding would bring to a halt plans for developing the island and creating more than 100 acres of parkland, and allow further deterioration of the historic buildings. "We're nervous that if you're not moving forward, you're moving backward," said Pirani.

No Deposit, No Return

Under Paterson's budget proposal, funding for parks and open space would be cut not just in the upcoming fiscal year but permanently diminished through a change in the funding formula.

Revenue for the fund now comes from the real estate transfer tax. In past years, that tax has generated about $1 billion a year, but receipts have fallen with the decline in the real estate market. Many other states use a similar mechanism, tying a fee on real estate transactions to funding for projects that would mitigate the impact of development, provide recreation and green space for growing communities, and protect water bodies and natural areas.

Paterson wants to replace this source of environmental funding with money from unclaimed bottle deposits. That would require the passage of an updated bottle bill, the so-called "bigger better bottle bill," which would expand the 5-cent bottle deposit to sports drinks and bottled water and require beverage companies to turn over unclaimed deposits to the state.

If the updated bottle bill were to pass, the amount of unclaimed deposits is estimated at $118 million. For parks and open space, the governor proposes an additional $80 million from the real estate transfer tax and $7 million from a variety of other sources. That would keep future spending at the level proposed for next year, a third less than the amount legislators agreed in 2007 was long overdue to meet the state's needs to protect open space, farmland and water supplies, build and maintain parks and revive waterfronts.

"Two years ago, the state was facing a very different financial outlook," said Jeffrey Gordon, a spokesman for the New York State budget division. "Clearly New York is facing a fiscal decline greater than any we've seen since the Great Depression and reductions were taken across all areas of state spending."

Environmental and parks groups argue that the savings generated from reducing Environmental Protection Fund spending would only be illusory. "These programs are much less expensive than the costs associated with environmental clean-ups, public health impacts and lost revenue from recreation and tourism," said Norreida Reyes, conservation director of the Sierra Club Atlantic chapter, in a prepared statement.

In their reaction to the financial crisis, said Ottney of the Nature Conservancy, state officials appear to view open space, parks and other environmental programs as discretionary items. But, she said, "they are not options, they are necessities."