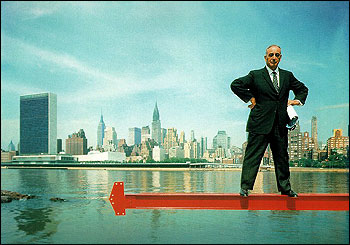 At a recent meeting in the Lower East Side about how to spend remaining federal funds to rebuild lower Manhattan, a group of protesters gathered outside, angry about how the money has been allocated so far. To rebuild, City Councilmember Margarita Lopez yelled, "you don't need a power broker. The only thing you need to do is talk to people in the community."

For many New Yorkers, the phrase "power broker" means one person: Robert Moses. And he wasn't known for talking to communities. He was known for "getting things done."

From 1924 until 1968, Moses built public works in the city and state, including seven city bridges, two tunnels under the East River, 658 playgrounds and 416 miles of parkways. He also destroyed neighborhoods, dislocating thousands, to make way for his expressways. His biographer, Robert Caro, wrote in The Power Broker that Moses was fond of saying, "When you operate in an overbuilt metropolis, you have to hack your way with a meat ax." and "You can't make an omelet without breaking eggs."

In the decades since Moses' day, planning in New York City shifted to a community review process, to give neighborhoods more of a say in their own future. This has also meant that far fewer huge public works get built. But as plans develop for massive public building projects in lower Manhattan, for the 2012 Olympic bid, and on the island's far West Side, some say that New York City could learn from Moses' methods, while others worry that the power broker's worst tactics may already be at work.

In The Power Broker, Caro writes that Moses was "America's greatest builder. He was the shaper of the greatest city in the New World." New Yorkers never elected Moses to anything, but he was able to amass power as governor after governor and mayor after mayor appointed him to important positions - at different points in his career, Moses was head of state and city parks, chair of the city's slum clearance commission, construction coordinator, and once occupied 12 different positions simultaneously. Moses used the power of the public authority to sell bonds, build roads, collect tolls and put the money back in to new projects.

Moses fell from power in the late 1960s and died in 1981, but his influence hangs over many current debates. In fact, New Yorkers are now discussing the future of some of the projects that Moses himself built, including Lincoln Center, the cultural hub that Moses created as a 1960s urban renewal project. And in the South Bronx, community groups have created a plan to tear down the Sheridan Expressway, a 1.25 mile-long part of Moses' legacy.

Despite an incredible record of "getting things done," not everything that Moses proposed was built.

In fact, he lost a major public battle to build an expressway through lower Manhattan, after author and urban planner Jane Jacobs galvanized West Villagers and other lower Manhattan residents to stop the highway. The great builder also never succeeded in forging a road down Fire Island - in 1964, the Fire Island National Seashore was established instead. And Moses' Coliseum at Columbus Circle, which Caro called a "glowering exhibition tower whose name reveals Moses' preoccupation with achieving an immortality like that conferred on the Caesars of Rome," was torn down in 2000 to make way for the new Columbus Center.

Moses-sized Projects Today: Olympics and the West Side

But while the Coliseum may have fallen, the figure of Moses continues to inspire debates and influence projects today. When now deputy mayor Daniel Doctoroff and a group of developers, politicians and planners first assembled the bid to bring the 2012 Olympics to New York City, the New York Observer called the group "a hundred-headed Robert Moses... frustrated by decades of political paralysis and determined to resuscitate the long-vanished art of getting things built on a grand scale with brute political force."

When Moses was president of the New York World's Fair of 1964-65, he fought to turn the exposition's fairgroundsâ€“ shifting money around in secret, according to his biographer Robert Caro â€“into Flushing Meadows-Corona Park. When the park was dedicated, Moses said that the fair had "ushered in, at the very geographical and population center of New York, on the scene of a notorious ash dump, one of the very great municipal parks of our country."

The Olympics plan - which backers say would, like the World's Fair, use an international event as a catalyst for major city improvements - includes joining the two now-contaminated lakes in Moses' Flushing Meadows-Corona Park into one big venue for rowing competitions. It would also build an Olympic Village in Queens, extend the #7 line westward, and create an 86,000-seat Olympic Stadium on the far West Side of Manhattan.

The Olympics bid garnered New York the U.S. nomination for the games, but the city must compete against a dozen cities around the world before the International Olympic Committee selects a winner in 2005. Meanwhile, city officials say that construction on some of the Olympics plans cannot wait until the committee makes its choice.

The Olympic stadium is just one component of the Bloomberg administration's plans for the West Side, including building green spaces, rezoning the garment district, and using bonuses to encourage high-rise development and new office buildings. Residents have said that a stadium -- which together with an expanded Jacob Javits Center would extend 11 city blocks -- and new business district could bring more traffic, cause rents to go up and displace residents and small businesses.

According to Hunter College professor Tom Angotti, Robert Moses would have been happy to see the new plans for Manhattan's far West Side, which "would basically bring an end to Hells Kitchen, the historic rough-and-tumble neighborhood... that's been depleted of its population over the last century, cut up by giant renewal projects." In an article for Gotham Gazette, Angotti imagined a conversation about the project with Moses, who he depicts as saying, "[The mayor] did it my way. Didn't listen to those people who live there. What do they know anyway? You have to think big and think about the future! You want to expand midtown to the west, just do it! How do you think we got Lincoln Center?"

Ron Shiffman, director of the Pratt Institute for Community and Environmental Development, said that it is too early to tell whether the Olympics plans will truly benefit the city or will become the newest example of using Moses' "meat ax" to decide a neighborhood's future. The Olympics could create projects that leave the city a valuable legacy, but, he said, "if they don't engage in a planning process with the people who live there, then the project could emerge into the kind of planning that Moses was engaged in."

As planning continues on the city's other Moses-sized project, rebuilding Ground Zero, many details about the project are still being debated nearly two years after the attacks. They are being discussed by master plan architect Daniel Libeskind, World Trade Center site owner the Port Authority, lease-holder Larry Silverstein, state and city officials, family members, residents, and many others. At many points during the rebuilding process, people have asked: who exactly is in charge here?

"New Yorkers are asking if our city needs another Robert Moses," Alexander Garvin wrote in Topic Magazine. "It is an appropriate question: Despite his mistakes and his failures, nobody, not even Baron Haussmann in 19th Century Paris, has ever done more to improve a city," added Garvin, who until this spring worked as top planner for the head rebuilding agency, the Lower Manhattan Development Corporation, and also developed the plans for the 2012 Olympic bid. "In truth, Moses was not omnipotent, but rather an unusually gifted public servant who had mastered the Art of Getting Things Done. That art deserves attention more than ever."

Garvin wrote that the city should learn from Moses how to push forward with an agenda that many can agree on, how to compromise (as Moses did to build his Coliseum at Columbus Circle), and work for the kind of quality of design that Moses championed at Jones Beach. At the same time, Garvin wrote, any planning should make sure to include the public that Moses once sought to shut out of decisions.

But some involved in rebuilding say that it doesn't make sense to look back on the Moses method at all. Shiffman said that instead, New Yorkers should be proud of the distinctly non-Moses-like form that rebuilding the city has taken so far. "Given the fact that the World Trade Center site is controlled by the Port Authority and Larry Silverstein, it has been much more of a democratic process of planning than we have seen in a long time. Civic groups developed the framework and the standards by which the LMDC has to operate. And you can't forget July 15 of last year, when people turned down the original plans [at the Listening to the City town hall meeting]."

As Michael Kuo, a 9/11 victims' family member and a planner for the rebuilding project Imagine New York, said, "I think we are in a different era now."

RELATED ARTICLE: A Community Plan for Moses’ â€Highway to Nowhere’