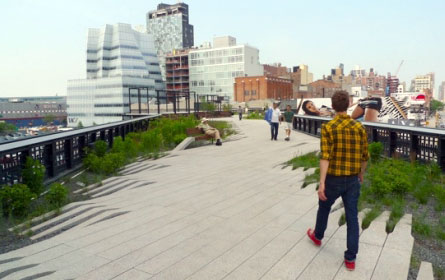 By the time the first section of the High Line opened in June to wide acclaim, dozens of new buildings had already sprouted up around it, including a glass-curtained hotel that floats above the park and a series of residential towers designed by world-renowned architects. City officials have predicted that development sparked by reinventing the abandoned elevated rail line as a park will bring $4 billion in private investment and $900 million in revenues to the city over the next 30 years, the Times reported.

The surge in development spurred by the High Line is the latest exhibit in the growing stack of evidence that having beautiful, well-maintained parks is much more than a nice amenity cities can ignore when times are hard. Creating and maintaining parks stimulates the economy and also provides quantifiable recreational and environmental benefits along with other services and savings to taxpayers.

In the most recent analyses of the economic benefits of parks, a study found that Central Park contributed $1 billion to the city's economy in 2007. A broader assessment by the Center for City Park Excellence of The Trust for Public Land quantified the real economic benefits that parks provide, using examples from cities around the country.

In supporting the seemingly quixotic vision of West Side residents Joshua David and Robert Hammond, founders of Friends of the High Line, to save the old railway and make it a linear park -- and in incorporating it into the city's planning process for the far West Side -- Mayor Michael Bloomberg indicated he understood the impact public space can have on a city's economic growth. The mayor further recognized the link between parks and prosperity in his sustainability plan, PlaNYC 2030, which aims (though, since the recession, at a slower pace) to create new parks and plazas citywide.

Until the fiscal problems hit last year, the Bloomberg administration had modestly boosted the budget for operating and maintaining the parks department, to about $270 million a year. But next year's budget cuts about $13 million from parks maintenance, eliminating 250 summer workers as well as $3 million for tree pruning. This follows the previous year's reductions, for a total cut of $24 million since 2007.

The parks budget has not had consecutive cuts of this magnitude in more than 15 years. Advocates worry that the reductions could start the city back on the path to the dismal conditions of the 1970s and '80s, reversing a parks revival that contributed to the city's economic resurgence.

How Parks Boost the Economy

Such cuts could turn out to actually cost the city money. Fine parks contribute to the economy by increasing property values and, as a result, real estate tax receipts. A 2008 analysis found that the completion of the Greenwich Village section of the Hudson River Park raised real estate prices in the adjacent two blocks by 20 percent.

In 2003, a study by Ernst & Young and New Yorkers for Parks looked at the results of investment in six city parks, with supplemental data from 30 additional parks. It found that real estate values were higher on blocks closest to well-managed and maintained parks, such as Prospect Park.

Parks also attract tourists and residents who come to events and activities or who just want to enjoy the surroundings, generating economic activity inside and near the park. Central Park attracts more than 25 million visitors a year, about one fifth of whom come from outside the city, according to "The Central Park Effect," which was prepared by the economic analysis firm Appleseed for the Central Park Conservancy. The study determined that in 2007, spending by visitors and enterprises in the city's most famous park directly and indirectly accounted for $395 million in economic activity. This activity, as well as increases in property values near the park, generated $656 million in revenues for the city in 2007.

"Measuring the Economic Value of a City Park System," released in April by the Center for City Park Excellence at The Trust for Public Land, analyzed seven ways that city parks provide economic benefits: property values, tourism, direct use, health, community cohesion, clean water and clean air. Starting with conservative assumptions of park use and other variables, researchers calculated dollar values for each of these benefits in a different city.

In San Diego, for example, the study determined that, with slightly less than 5 percent of tourists coming to the city especially to visit the parks, park-derived tourist spending in 2007 totaled $114 million. That generated $8.6 million in direct sales and other tax revenue as well as a collective increase of $40 million in residents' wealth.

By offering free or inexpensive recreation, parks also save residents money. In Boston, for example, the study determined that the economic value of direct park use was $354 million.

The health benefits of exercise in parks offer further savings. The study calculated $19.9 million in medical savings realized by residents in Sacramento because of active recreation in parks.

According to the report, "numerous studies have shown that the more webs of human relationships a neighborhood has, the stronger, safer and more successful it is." Well-used parks offer many ways for neighbors to get to know each other, and efforts to create, save, or care for parks create further community cohesiveness. This "social capital" can reduce a city's costs for policing, fire protection and criminal justice. Because the economic value of social capital can't be measured directly, the report cited as a proxy the amount of time and money residents contributed to "friends" groups and other park-oriented organizations and agencies.

To capture the economic benefits of parks, however, a city must invest in their upkeep. Parks help the economy when they are well maintained and well used. They can have a negative effect when they are neglected, attracting vandalism, drug-dealing and other crime. During the New York City fiscal crisis of the 1970s and '80s, dirty, worn and dangerous parks became a potent symbol of the city's decline.

The parks system, compared to other city services, takes a relatively small amount of money to maintain. Although the parks department operating budget has increased since the lows of the early 1990s, the number of park properties has increased by 20 percent, and the department still runs on a budget that park advocates say is not adequate to keep the entire system in good repair.

Especially at risk are parks in the outer boroughs and in lower-income neighborhoods, which have not benefitted as much from the private funding that burnishes the city's flagship parks. Users of some parks and sports fields still contend with trash, locked bathrooms and lack of maintenance. Daily News columnist Denis Hamill described these types of conditions recently inrecounting his experiences as a baseball dad in Queens.

Many of the neighborhoods surrounding these parks have been affected disproportionately by the mortgage crisis and declining real estate prices. Given the economic benefits of well-used and maintained parks -- and the increased need for free recreation and relaxation during a time of financial stress for many residents -- can the city afford to pare down the parks budget further?