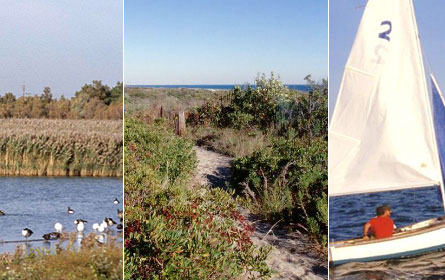 When my 19-year-old daughter and her friends are looking for something to do, they often head for the water. They walk in the park along the Hudson River, go to concerts on a pier, watch movies in Brooklyn Bridge Park or take a ferry to the beach. 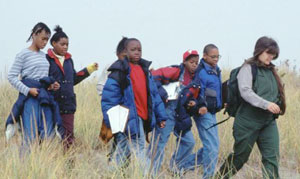 None of this would have been possible twenty or even ten years ago. Over the past two decades, parks have been built and restored around the Manhattan shoreline, along the Bronx River, on the downtown Brooklyn waterfront and on Governors Island, bringing people to the water and redefining the experience of visiting and living in New York City. These changes were illustrated this summer on Governors Island, where expanded ferry service and a new promenade, picnic area, and Water Taxi Beach drew more than 100,000 visitors through July -- nearly twice as much as the entire summer of 2007.

While city and state parks have been the focus of this reinvention of the waterfront, much more can be done to the vast acreage of parks under national jurisdiction. Known together as the National Parks of New York Harbor, these parks offer a tremendous opportunity to integrate the harbor into the life of the city and provide an urban park experience on the level of a Yellowstone or Yosemite.

"There are sites of great renown and beauty, such as the Statue of Liberty, and there are sites that have not come close to realizing their potential and are certainly not the iconic parks that the public deserves," said Alexander Brash, northeast regional director of the National Parks and Conservation Association, a national parks advocacy group.

Few New Yorkers are aware that the National Park Service is the largest single landholder in the harbor, having jurisdiction over 26,000 acres of parkland, wetlands and water, nearly the size of the entire city park system. Most of this acreage is within the three Gateway National Recreation Area units, spanning the Queens, Brooklyn, Staten Island and northern New Jersey shores.

A 2006 poll found that nearly half of New York area residents don't know about and have never visited Gateway. Even so, in 2006, Gateway was the fifth most visited park in the national park system.

New York Harbor is a great estuarine ecosystem and a key stopover on the avian Atlantic Flyway. It has also played a starring role in the history of the country, as the site of the first U.S. government, a great commercial port, a nexus of military defense and the portal for waves of immigration.

The harbor's 10 national parks and monuments, which include 23 unique sites, were grouped together in 2002 as the National Parks of New York Harbor. "Sitting on a boat, or from Governors Island, you can see the sites together and understand America in a different way," said Robert Pirani, the director of environmental programs at the Regional Plan Association.

Among the harbor park sites are Ellis Island, Federal Hall, Castle Williams and Fort Jay on Governors Island, as well as Grant's Tomb and the city's newest national memorial, the African Burial Ground in Manhattan.

When Congress established Gateway in 1972 as one of the National Park System's first urban national recreation areas (the other being Golden Gate National Recreation Area in San Francisco), it authorized $92 million to restore the collection of shoreline properties that had many different prior uses and were in various states of disrepair. Gateway, though, never got the initial funding -- equivalent to $1.2 billion in today's dollars.

The park's 1979 general management plan envisioned an "opportunity to demonstrate that abused resources can be renewed," and a park offering "millions of Americans a chance to have national park adventures and experiences virtually at their own doorsteps." But the long underfunded national park system was never given the money to restore Gateway's landscapes, renovate many of its structures, build extensive new recreational facilities and provide adequate visitor services.

In addition, public transportation to and within the far-flung sites was never put in place, preventing Gateway from becoming the urban recreational, natural and historical destination it was meant to be. "The whole point of Gateway was to be of service to people living in cities who don't have cars," said Brash.

A 2007 report card by the National Parks and Conservation Association found Gateway's natural and cultural resources in poor condition. Degraded habitat, derelict buildings and impermeable asphalt remain throughout the park. Wetlands and other habitats once teeming with wildlife are damaged by pollution from former landfills, runoff from commercial areas, treated wastewater from city sewage plants and sewage overflows during storms. The wetlands in Jamaica Bay are disappearing at an alarming rate, and the sea level's rise due to global warming will affect the entire park's shoreline. 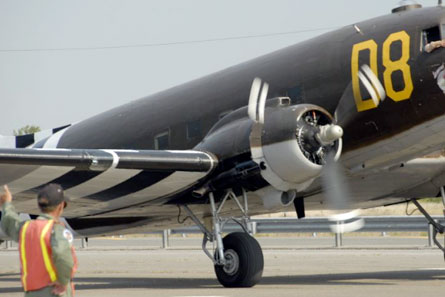 Floyd Bennett Field, the city's first municipal airport and former a U.S. naval air station, comprises 20 percent of Gateway's land mass, but it has never been renovated to fulfill its potential as the "gateway to Gateway." Runways still cover the landscape. The former control tower and terminal was converted to a visitor center, but much of the interior is crumbling and off-limits to the public. Along with recreation such as bird watching in the grasslands, flying model airplanes and community gardening, the park serves for other city uses, such as training city police and sanitation drivers.

Recent efforts have begun to make Gateway the great urban national park many hoped it would become. Creating a vision and gaining the necessary funding, advocates say, will require the collaboration of agencies at the city, state and federal levels, as well as with the many organizations concerned with the park and harbor. 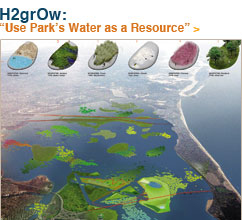 A finalist from the design competition, Envisioning Gateway

In 2007, the National Parks and Conservation Association partnered with the Van Alen Institute and Columbia University to hold a design competition, titled Envisioning Gateway. "The idea was not that the winner of the contest would be the one producing the final design for the park, but rather to raise the bar on what the park could and should be," said Brash.

The National Parks Service is working on a new general management plan for Gateway. It has hosted open houses throughout the summer, and there will be five more open houses in September.

Some park advocates are concerned, however, that the process of creating a new plan would recreate the wheel and risk further delay. Advocates the original 1979 management plan to be made available to the public online along with all of the other pertinent information, such as maps, scientific data and documents relating to the development of the new plan.

The original plan should be used as a foundation of the new plan, "so we're not doing zero-based planning," said Dave Lutz, executive director of Friends of Gateway and a participant for several decades in efforts to protect, improve and create access to the recreation area. "Let's look at what's there and decide what we like, what we don't like; what we can do, what we can't do."

Other organizations have focused on the harbor parks as a whole and on improving access and making the harbor a new destination for visitors and residents. The New York Harbor Parks Conservancy was established in 2002 as a nonprofit partner for the city's national parks. Among its goals are to develop waterborne transportation to make the harbor and its islands more accessible and to raise awareness about the historical and cultural significance of the public spaces around the harbor. The conservancy has created several guided harbor tours and is working to increase public access through ferries and buses to the far-flung sites.

Focusing on the inner harbor, the city's Economic Development Corporation has designated a new harbor district. Next month, as part of NYC 400 week, it is presenting a celebratory Harbor Day, with free bikes and boat service connecting six major waterfront sites.

Restoring and developing Gateway as a model urban national park and a vibrant connection to the waterfront presents a tremendous challenge. It will require a vision that balances ecological conservation, historic preservation and recreation, greatly improved public access, and the cooperation of scores of stakeholders with often conflicting agendas.