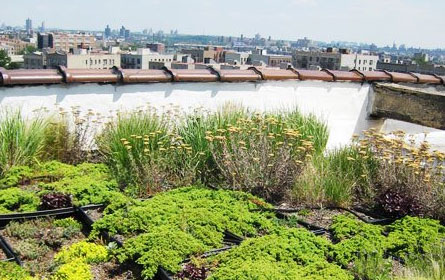 "Basically everything that ended up in the streets tended to end up in our riverway," said Miquela Craytor, executive director of Sustainable South Bronx.

This is how she described the Bronx's Starlight Park -- a decrepit space, long-since abandoned by manufacturing companies who left behind remnants of contamination and debris.

This was, however, before her organization, and other local groups, intervened.

The revival of this park, and many others along the Bronx River waterfront, is thanks largely to Sustainable South Bronx, an environmental justice organization whose mission is sometimes stated as "greening the ghetto." Noting a lack of access to open spaces in their area, the organization's founder Majora Carter fought hard to secure a feasibility study for creating a greenway, which will eventually link restored parks up and down the Bronx River. To date, the project has secured nearly $30 million dollars, according to the group's Web site.

Today, Starlight Park is slated for a major renovation, which will include amenities such as ball fields, playgrounds, a floating dock and legitimate access to the visible â€“ but often unreachable â€“ Bronx River waterfront.

Sustainable South Bronx's activism has been admired nationwide, but community activism along New York City's coastlines is no longer a rarity, according to experts.

With a wave of development sweeping across the city's waterfronts, community-based groups are stepping up and making their voices heard -- initiating, advocating and constantly pushing for access in their neighborhoods. But even as the grassroots movement gains momentum, their priorities can sometimes get caught in a whirlpool of community, developer and city interest.

As the president and chief executive officer of the nonprofit Metropolitan Waterfront Alliance, Roland Lewis has seen the organization and power of grassroots groups along the city's shorelines.

"So many of these groups have taken it upon themselves to create access, use and participation in waterfront planning and development all across the city," said Lewis, whose organization is an umbrella of 400 local groups and agencies with ties to the New York and New Jersey coastline. "We sometimes call it a 'blue movement' and part of it is neighboring groups realizing that they have a stake."

Lewis said for most of New York's modern history, the waterfront "was cut off by industry, by roads, by rails. It became a place where no one wanted to be."

With many of these commercial enterprises leaving the coastlines, grassroots groups from Newtown Creek to the Hudson River are clamoring for their "stake" in the 578 miles of New York City waterfront -- 17 percent of the state's total coastline, according to the New York State Department of Coastal Resources.

The benefits to waterfront access are myriad for these communities -- a local economy stimulated by tourism and industry, the replacement of deteriorating brownfields, and the creation of recreation opportunities. The latter, said Lewis, is especially important for the outer boroughs, where the populations are traditionally underserved by open space.

"It's every person's right to be able to get to the water," said Lewis. "We can improve quality of life tremendously... especially for those of us who can't go out to the Hamptons."

Neighborhood and grassroots groups are in a unique position to push their agenda, according to Joan Byron, the director of Sustainability and Environmental Justice at the Pratt Center for Community Development. "There are things you can do from within government and you can only do from within government. But the power to advocate for specific projects is outside of government," said Byron. "Who else is going to do it?"

Organizations like Sustainable South Bronx, Friends of Brook Park and the Newtown Creek Alliance seem to be up to the challenge of trying to reconnect their constituents with one of the city's most valuable resources.

Judi Francis stands on a top level of a parking garage in Brooklyn Heights. She's facing toward the East River and the picturesque Manhattan skyline, but her gaze is downward at the proposed Brooklyn Bridge Park site.

The Brooklyn-Queens Expressway roars underneath, as Francis points out the future pedestrian entranceway to the park, now under-construction, which she deems hazardous.

"See, it will be very dangerous to cross there," she says. She shows me where her organization, the Brooklyn Bridge Park Defense Fund, a community-group opposed to current park plans, wanted to tunnel beneath the expressway to create a safer thoroughfare. "But we can't because where that strand of trees is, that will be a 20-story high-rise," says Francis, a resident of the area for 30 years and president of the defense fund. 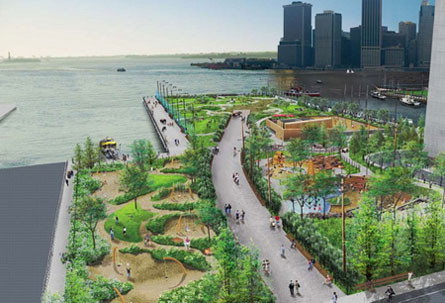 Photo (c) BBPDC
An aerial view of the south portion of the Brooklyn Bridge Park. The contested high-rises are not in this artists' rendering.

That very high-rise, along with five others, has become a major point of contention between some area residents and the Brooklyn Bridge Park Development Corporation, a subsidiary of the Empire State Development Corporation, and a partnership of the state and the city. The governor and the mayor appoint their board. Francis charges that the city ignored years of community planning by local groups by erasing all recreational activities from park plans in favor of luxury condos, which the city says will help finance the project.

"One day I woke up like everybody in Brooklyn did, and I opened my New York Times, and a park that had been planned by the community all along the waterfront was suddenly transformed into a housing development with park-like elements," says Francis.

Francis, who says she speaks for 13 community associations and the local chapter of the Sierra Club, contends the condos have replaced a pool, skating rink and event venue, unofficially mapped by the neighborhood during 40 group sessions â€“ making the future of the park a completely "passive" experience.

"You don't build a park with housing because the people who live inside the homes are not going to want people to tramp on their lawns," she said.

Francis isn't the only one disappointed in the plans. The Project for Public Spaces lists the Brooklyn Bridge Park in its design "Hall of Shame," along with other New York locales like Astor Place, Columbus Park Pavilion and the Federal Plaza.

"It's going to be beautiful but it will be limiting in terms of the amount of people and types of uses and flexibility to evolve over time," said Ethan Kent, vice president of Project for Public Spaces.

Kent said that waterfronts "are the face of the city" and should be designed to reflect the identity of an area. He said this was not the case for Brooklyn Bridge Park.

"Unfortunately it will be more of a suburban backyard or a Jamaica Bay, which again is beautiful, but not appropriate for the area," he said.

But Regina Myer, who heads the group charged with developing the site, the Brooklyn Bridge Park Development Corporation, said that she has received a tremendous amount of community support. This includes the likes of Brooklyn Bridge Park Conservancy and Community Boards 2 and 6.

"There were numerous community meetings that took place over the history of this project," said Myer. "It just so happens that the [Brooklyn Bridge Park] Defense Fund objects to our financial model."

Myer said these criticisms represent "one particular perspective" and that the housing complexes developed out of a plan to keep the park financed and maintained â€“ with support from the neighborhood.

"The planning process really did evolve based on different community groups, financial constraints and physical constraints," said Myer. "I think people have recognized that there's no other source for maintenance and economic funds."

The debate at Brooklyn Bridge Park points out the difficulties of balancing a community's vision with the feasibility of implementing and financing development.

"Waterfront planning projects around the world are undergoing this renaissance and shift in uses," said Kent. "So many of them are leading to conflict and frustration on the part of all parties."

"Unfortunately it has been something of a hallmark of the earlier years of the Bloomberg administration. A lot of the big projects sort of floundered and were led more by EDC [Economic Development Corporation]."

There are similar sentiments outside of Brooklyn. Back at the Sustainable South Bronx, Craytor said officials and developers occasionally labeled parts of their plans as "details," while they were high priorities to the community.

"Essentially our role was to say, 'No, this is what the community wants, this is what we were pushing for, so we have to find a different way,'" said Craytor. "If it wasn't for our presence in the room, I truly believe that certain elements would've disappeared."

Kent said that despite past planning, he feels positive about future development.

"We're still hopeful that with another term they might make community-based planning and public planning a real legacy of their administration," said Kent.

As Francis watches her dream park transform, however, she remains discouraged.

"It's the way the mayor has sort of transformed the city," Francis lamented. "Unless you're in a position of great wealth or great power, your voice means nothing."